You know when Najib is finished. When people like Musa Hitam is frustrated with him. Tun Musa as I know him is a staunch supporter of Najib. Najib even asked his advice on how to handle the old man. Musa has first-hand experience in dealing with the old man- aka the man who can walk on water.

By saying what he did, Musa differentiates himself with Shahrir Samad- his onetime protégé, now chief apologist for Najib. Many people say Shahrir is a faithful lieutenant of Musa. But on many occasions, Tun Musa told me- Shahrir would just get away from him refusing to listen to his explanations of grim realities of Malaysian politics. That’s the irrational part of Shahrir Samad. He hates Mahathir. He wants to defend Najib maybe because they are related.

People still don’t seem to understand. It’s the end for Najib. All he can do now is appear to be brave and collected. He is not brave. He cannot give a straight answer on 1MDB.

He does not dare appear before parliament preferring instead to explain to a congregation of pliant UMNO division heads and division committee members. They came not to listen to Najib but were eager for him to end whatever explanation and just hand over the cash to them.

The retort that says the PM can’t be stupid to use government money or hes not that stupid to use the funds for private purposes. Until anyone can prove that he uses the money, then we will be well advised that no has accused him of doing so.

Like the Malays say- there’s no thunder and no rain, Najib rushed forward to say he did not use the funds for pirate private purposes. This exuberant response only served to confirm that the accounts cited by WSJ are indeed his and that money actually went into his account.

He cannot give a straight answer to say whether the accounts were his. All he is doing is huffing and puffing, to-ing and fro-ing.  His lawyers who is represented by the lawyer who will always strike last minute out of court settlements can’t even write a proper letter.

A legal firm which ( not who has, yes) has to ask what a potential adversary is saying and mean, must surely be a half past six legal firm. I would urge Najib to spare the people his melodramatic conduct and just leave office. You know, the signboard at many suraus and masjids that say, pray before you are being prayed for.

So brada man- go on leave. Temporary then permanently. You better beware when you find your security details are changed.

Suddenly you find yourself with new bodyguards and new scary security escort. That means the police are about to arrest you. - Mohd.Ariff Sabri bin Hj. Abdul Aziz@sakmongkol ak47

Pascal Najadi, the son of slain AmBank founder Hussain Najadi, claimed the man who purportedly ordered his father's killing has returned to Malaysia under an alias.

Speaking to Malaysiakini from Russia in a Skype interview, Pascal said he was informed of the suspect Lim Yuen Soo’s return by a source on condition of anonymity.

He also claimed Lim was connected to the wife of a local senior politician.

Pascal insisted that police look into Lim's phone records over the last five years as it may reveal communications with the woman.

Malaysiakini's investigation also revealed Lim is more than a businessman who ran "entertainment outlets and carpark businesses" as described by police.

According to a Companies Commission of Malaysia (CCM) search, Lim controls 30 percent of the company. The information was last updated on Jan 5, 2015.

The other two shareholders are former Melaka Tengah police chief Mohd Khasni Mohd Nor, who also holds a 30 percent stake in the company, and one Ismail Mohd Noh who controls the remaining 40 percent.

Kong (left) was arrested in September 2013 and sentenced to death a year later but Lim remained elusive despite police announcing in October 2013 that it was seeking Interpol's help to track down the mastermind who was believed to be in Australia.

So it came as a surprise to Pascal when inspector-general of police Khalid Abu Bakar on Wednesday abruptly declared the case, with the shooter already convicted, as "solved".

It is for this reason, Pascal said he had not relayed the information about Lim's possible return to the Malaysian police whom he described as "unreliable".

"I am not the one doing the police work. This should have been picked up by the police. They should know, and I think they do know...," alleged Pascal, who had hired his own private investigators.

Pascal said he was baffled that Malaysian police had in October 2013 given an ultimatum to Lim to turn himself in within a week and then later announced they believe he was in Australia and would seek Interpol's help.

Around the same time, Pascal said an anti-terrorism officer in France with close links to Interpol informed him that Lim had fled from Sydney, Australia to Shanghai on a commercial flight.

"Now, if you look at the security protocol, you understand that in any modern nations' airport, with biometric passport, you cannot walk through unnoticed.

"So this man had very powerful help. Who helped him? I don't know, but he had powerful help to fly on a scheduled flight from Sydney to Shanghai in October 2013," said Pascal.

Pascal said the focus of his private investigators is now on establishing Lim's links to certain individuals.

"We are in the middle of investigating everything. Because the Malaysian police are not reliable, we have to do it ourselves.

"I do not want to reveal things that are not yet ready but they are ongoing in this process and of course today's process helps us to get more access to information than before," he said.

The "process" Pascal was referring to is a separate investigation into allegations that RM2.6 billion linked to 1MDB was deposited into Prime Minister Najib Razak's bank accounts at AmBank.

Pascal had previously alluded that the two cases may be linked, but when pressed on whether he had evidence, he was reluctant to reveal much except to say, "I have reason now to believe there is a link".

He also described claims that his father was killed for mediating on behalf of a temple to prevent its land from being acquired as a "concoction".

Police chief Khalid had however dismissed any suggestion that Hussain's murder was linked to the scandal involving government-owned investment fund 1MDB. - mk

DAP stalwart Lim Kit Siang has apologised to the public over Pakatan Rakyat's failure to hold the coalition together.

In a speech at a breaking of fast event in Shah Alam last night, Lim said despite Pakatan's "death", DAP would continue to pursue the coalition's common policy framework.

"(Pakatan's common policy framework) will live on and continue to be the basis of DAP's struggle for a new Malaysia, until there is a new government in Putrajaya," said Lim.

Given the political realities in Malaysia, where no single party can rule without a coalition, Lim called upon all "progressive and patriotic" political leaders - even those in BN - to work together to save Malaysia.

"Is there not a single Umno or BN MP who does not feel outraged at the rampant corruption, abuse of power, socio-economic injustice, and collapse of good governance in Malaysia?

Last month, both DAP and PKR had agreed that Pakatan had ceased to exist on grounds that the coalition no longer functioned.

This followed the decision passed by the PAS annual delegates' meeting for the party's executives to cut ties with DAP. PAS' syura council have followed through with this.

On the council's decision, DAP national vice-chairperson Teresa Kok said that it was a "blessing in disguise".

"It opens the door for the re-alignment of political forces in the country and a new chapter in Malaysian politics," said Kok in a press release.

She said it was appalling for the council to take one month to decide on the matter, especially since it was a foregone conclusion anyway.

The delegate's meeting, or muktamar, is the party's highest decision-making body.- mk 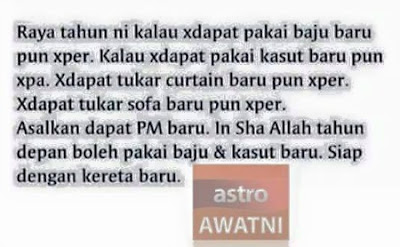 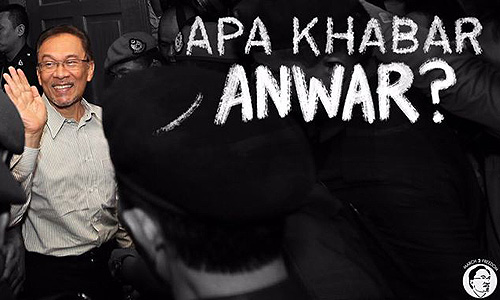