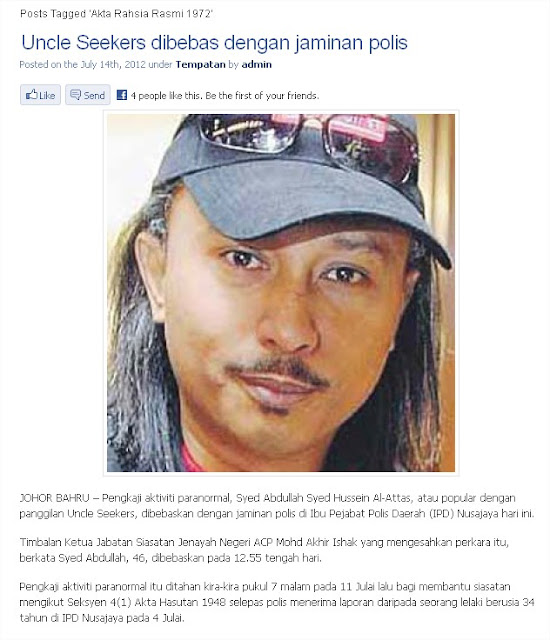 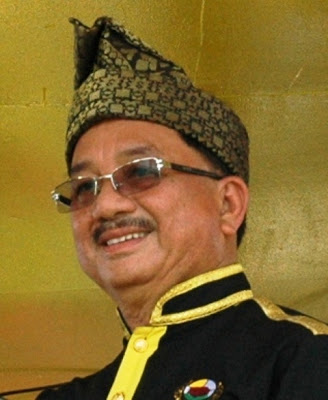 The Sabah lawmaker said he would leave it to the ruling party to decide on his Umno membership and his position as deputy minister of housing and local government.

Lajim was also reported as saying he was not joining the federal opposition as a party member despite widespread rumours that he would be defecting to PKR.

“As for my post as deputy minister, that will be decided by Prime Minister (Datuk Seri Najib Razak) at his discretion.

“Meanwhile, the Umno supreme council will determine my membership in Umno... if they feel I have violated the party’s regulations then they can dismiss me,”

Lajim (picture) was quoted by state news agency Bernama as telling reporters during the breaking of fast at his home in Likas Jaya, near Kota Kinabalu this evening.

The news agency also reported him publicly declaring the setting up of a new movement called the Pakatan Perubahan Sabah (PPS), or the Sabah Reform Front, at the same event, saying the group has a line-up of 17 representatives — one for each parliamentary constituency — in the state.

Apart from sitting on the Umno supreme council, Lajim was Beaufort Umno division chief and Beaufort Barisan Nasional (BN) chairman. He said he was resigning with immediate effect.

The Beaufort MP had last month told reporters the rumour had likely spread because “I speak like I am in opposition” but that he has made “no decision to leave and no offer has been made.”

“This is just speculation because I speak like I am in opposition. But it is not because I am against the government but I want improvements to my constituency. We have faced problems like flooding for over 15 years.

“But nothing is impossible in politics. If the public wants me to go, I will go, if they want me to stay, I will stay,” he had said then.

Lajim also said that because of his independent stance, “the speculation could have started internally with the intention to sideline me from BN.”

He had come under fire from Sabah BN secretary Datuk Rahman Dahlan last week for his vocal internal criticism of the coalition.

“There is no room in Barisan and Umno for prima donnas,” Rahman was quoted as saying by The Star on July 20.

“No one is indispensable. People, including prime ministers, have come and gone,” the Kota Belud MP was quoted further.

Anwar’s chief of staff, Ibrahim Yaacob, confirmed to The Malaysian Insider the PKR adviser would be in Beaufort, Lajim’s parliamentary seat, but kept a tight lip on the nature of the function.

“He has just arrived from Medina this morning and will be in Beaufort tomorrow, but what programmes he will be attending we don’t know,” Ibrahim said when contacted today.

Anwar has also been mum on the invitation.

Yesterday, Sabah PKR chief Ahmad Tamrin Jaini was reported by news portal Malaysiakini as saying the party had been invited to attend the launch of the Sabah Reform Front (SRF), which was organised by Lajim and Tuaran MP Datuk Seri Wilfred Mojilip Bumburing.

Lajim had quit his post as Kerambai Kebatu Umno branch chief last month but maintained that he was not leaving the party to join the opposition, while Bumburing, who is also deputy president of the United Pasokmomogun Kadazandusun Murut Organisation (UPKO), quit his BN division chief post last week. The latter has been coy of his chances of crossing over to PKR.

In Sabah, the deep-seated issue of illegal immigrants will likely be used as a key campaign issue in the coming polls, with the Najib administration holding the trump card for having finally agreed to investigate the issue by forming a royal commission of inquiry.

Federal seats in east Malaysia’s Sabah and Sarawak are expected to be PR’s focal point come the elections as both states, including the federal territory of Labuan, make up a whopping 57 seats, or 25 per cent of the 222 parliamentary seats available.

In Election 2008, BN retained power over the Putrajaya administrative capital largely due to wins in east Malaysia and Labuan, where it made a near-clean sweep, winning 55 seats against PR’s two.

But the ruling pact lost its customary two-thirds parliamentary majority after only securing a five-seat margin ahead of PR in the peninsula, winning in just 85 constituencies while PR secured 80 seats.- malaysian insider

The survey showing Mukhriz Mahathir as the favourite candidate for Kedah menteri besar was a good sign in BN’s bid to wrest the state from PAS control, said Kedah opposition leader Mahdzir Khalid.

“The components and ingredients of the survey are based on facts, involving all aspects and demographics of society,” said Mahdzir, who is also former Kedah menteri besar, in a SMS to Malaysiakini yesterday.

However he reminded that it was up to the PM to select the Kedah MB should BN win the state.

cannot be complacent. The appointment of the MB’s post is the sole right of the PM. Before we talk about posts, a win must be the priority of BN leaders at all levels,” he said.

Mahdzir (right) was referring to a Universiti Utara Malaysia (UUM) survey across 36 state seats in the northern state that reportedly showed overwhelming support for Mukhriz, the son of former premier Dr Mahathir Mohamad, for the MB’s post.

The survey predictably got the thumbs up of BN politicians but the disdain of incumbent PAS Menteri Besar Azizan Abdul Razak, who rubbished the survey.

Azizan slammed the academic who conducted the study for behaving more like “BN low-ranking leaders” than scholars who should be studying more pressing issues such as electoral fraud.

Jerlun Umno division chief Abu Hassan Sharif and Sungai Petani Umno division head Firdaus Zakaria concurred with Mukhriz that the real focus should be on winning the state before discussing the candidate for MB.

However, they stressed that grassroots leaders should give their full cooperation to Mukhriz or Kedah Umno liaison chief Ahmad Bashah Md Hanipah should either of them be chosen for the post.

According to the UUM study, Ahmad Bashah is the second most popular Umno candidate for the post of Kedah MB, followed by state Umno information chief and a minister in PM's Department Mohd Jamil Khir Baharom. Mahdzir himself is in fourth place. 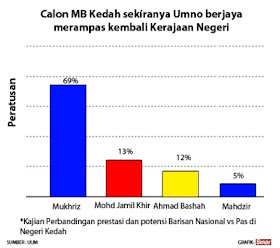 When contacted, Abu Hassan said he hoped Kedah leaders would agree with the top leadership’s decision on the matter and avoid “infighting and thus destroying each other”.

“What is important is that we govern the state and give the best service we can to the people. This is our goal. We must cooperate to garner (the people’s) support,” he told Malaysiakini.

Meanwhile, Firdaus said the Mukhriz-Ahmad Bashah pair was a “good team” to lead Kedah, pointing out that Jamil and Mahdzir were more “capable and suitable” to be placed in Parliament or federal government.

Pokok Sena Umno division chief Ahmad Lebai repeatedly stressed that BN candidates had to win their seats first, before they can even aspire to be menteri besar.

“Focus on the election first. Let the MB candidates be determined later by the leadership,” he said.- malaysiakini 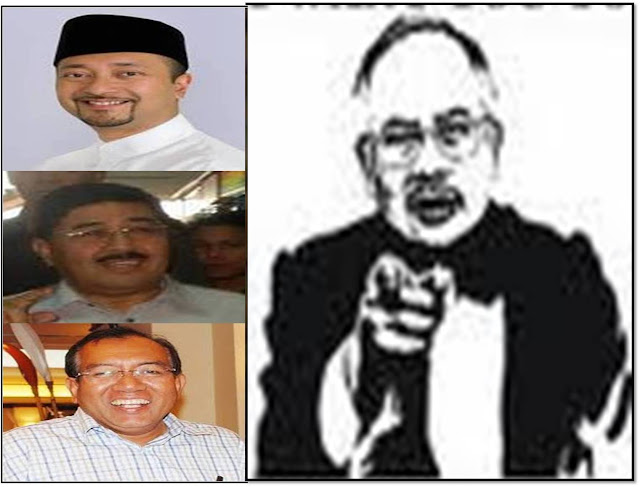