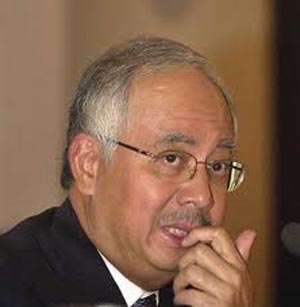 It looks like Prime Minister Najib Razak, at the centre of the Scorpene-Altantuya corruption and murder scandals, is hitting the panic buttons.

Officers from the Companies Commission of Malaysia tried to raid the office of human rights group SUARAM on Tuesday afternoon but had to abort their plan after discovering their warrant had not been signed.

The failed raid follows days of haranguing in the Umno-controlled newspapers urging the government to investigate why the human rights group was registered as a company, and yet styled itself as an NGO or non-governmental organisation.

Umno-linked groups also demanded that the authorities inspected SUARAM's sources of funding and what happened to the nearly one million ringgit it posted as earnings since 2009.

“It is to distract members of the public and divert attention from the ongoing probe into corruption involved in the Scorpene deal," SUARAM director Cynthia Gabriel said.

She had tweeted when 4 CCM officers turned up to question SUARAM staff as well as to inspect its books and raid its premises.

RoC officers just entered SUARAM premises w a warrant to do a search!@cynthia_gabriel

RoC officers warrant invalid, not signed by the Registrar, so they had to cut their visit short. Suaram staff know their stuff! Bravo!@cynthia_gabriel

But incredibly incompetent as the CCM staff may have seemed, it won't stop them from returning on Wednesday.

"They will come back tomorrow," said Cynthia.


Nervous over the revelations in France Meanwhile, the latest bltiz on SUARAM has shocked the civil society and activist movement in Malaysia. Although used to raids by the authoritarian Umno-BN government, few had expected such a bold move from Najib.

Many suspect that he might trying to seize documents to find out about the latest status of the ongoing trial on the Scorpenes corruption case in France.


"It is very likely that Najib might want to know what SUARAM knows.

Hence the raid on the pretence of checking its books but I believe that at this stage, Najib and Umno would do anything to cover their tracks.

They might want to exactly how much dirt the French police have dug up on them," PKR MP for Batu Tian Chua told Malaysia Chronicle.

Najib, as the defense minister sanctioning the Malaysian government's purchase of 2 Scorpene submarines in 2002, has been accused of taking at least 114 million euros as an illegal kickback via his proxy Razak Baginda.

Documents seized from DCNS, the vendor of the submarines, by the French police also show UMNO's involvement in the money trail for the payment of the illegal commission.


Frenzy to de-link Altantuya from Scorpenes - why? In the weeks prior to the frenzied calls to inspect SUARAM, the UMNO-controlled media had gone on a co-ordinated move to whitewash the case.

In particular, they tried to segregate the murder of Mongolian national Altantuya Shaariibuu from the Scorpenes deal by denying she had ever been to France or had met any DCNS officials.

However, documents seized by the French police show clearly that Altantuya could have entered France under the name of "SHAARIYBUU Bayasgalan born on 26 February 1979 in Mongolia was issued a temporary residency card on the French territory valid from 27 August 2004 to 26 November 2004".

Another document that records an interview between the French police and former DCNS Financial Director Gérard-Philippe Menayas also specifically mentioned Altantuya by name and stated her position as Baginda's interpreter.

Altantuya was murdered in Malaysia in 2006 by two of Najib's former bodyguards who have since been sentenced to hang. Both are appealing the sentence and there is huge speculation that the 'master-mind' behind the murder is still at large as neither men had any motive to kill her and one of them actually said that he had been paid RM100,000 to kill her but his statement was ignored by the Malaysian judge


The acceptance of Altantuya as a figure no matter how insignificant in the Scorpenes case will place enormous pressure on Najib. It will confirm the allegations that the Malaysian trial judge had refused to acknowledge and instead kept suppressed - that Altantuya was killed because of her connection to Najib's Scorpenes scandal.


High stakes for Najib and Umno Najib has also denied receiving any kickbacks from the Scorpenes purchase. However, until now his administration has refused to initiate a public inquiry into the matter. It was this denial of transparency that spurred SUARAM to file a complain in Paris against DCNS in 2010.

If DCNS is found guilty of having bribed Malaysian officials to buy their submarines, they may have to compensate the Malaysian people for the pricing inflated by the kickback.

The revelation of the Malaysian officials involved would also expose those guilty and if Najib was one of them, this would spell the end of his career. For Umno, the stakes are just as high.


The evidence raised by the French police and submitted to the Parisian court, which started hearing the case this April, shows the party had a hand in receiving a part of the alleged commission.

And so did Razak Baginda, who has been accused of being Najib's front man. - Wong Choon Mei ,Malaysia Chronicle 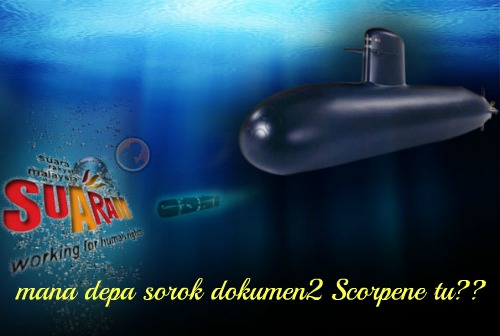 An idoitic move by a very desperate man.
This action has given up the game of hide and seek.
Book him danny so says hawaii50.