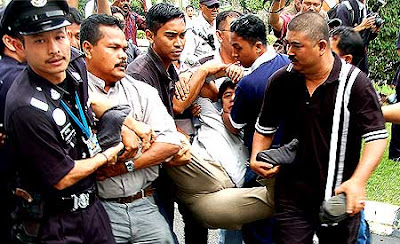 The Kuala Lumpur High Court today dismissed the appeal against the conviction of Batu MP Tian Chua for biting a police personnel three years ago.

However, Justice Ghazali Cha reduced his RM3,000 fine and six-months jail term imposed by the Magistrate Court in October last year to a RM2,000 fine or two-months jail.

Ghazali said that fine was reduced to RM2,000 to avoid a by-election for the Batu Parliamentary seat.

Article 48 of the Federal Constitution which stipulates that a member of the Dewan Rakyat can be disqualified if fined an amount "not less than RM2,000" by any Malaysian court.

Chua, who is also PKR strategic director, was convicted of obstructing constable Rosyaidi Anuar, 21, in front of Parliament complex on Dec 11, 2007.

Ghazali said the court would not dispute the Magistrate Court's conviction as the magistrate has made finding of fact.

"However, I note that although the sentencing is up to the magistrate, it is a first offence."

"Having him disqualified would result in a by-election to be called and this would involve a lot of funds."

Chua, who just returned from Paris this morning, was present when the judgment was read out in court. He was accompanied by 20 supporters, including Segambut MP Lim Lip Eng.

Approached by reporters later, Chua said that he was relieved.

“I am pleasantly surprised... I was expecting the worst. Now I can go on with my struggle for justice and reforms,” he said, before proceeding to the registrar's office to pay the fine.

They got to do that so as to fair,coz Bung Moktar only got RM2000.00 fine for bigamy.Though,Najib 1Malaysia is said to be riding on popularity,yet BN doesnt want anymore by-election,fearing Batu will be another Sibu.....