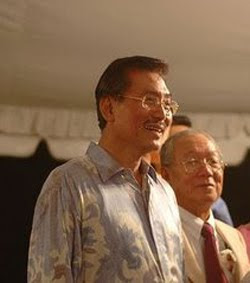 Speculation is rife that MCA president Chua Soi Lek and his colleagues in Johor Umno are behind the Sultan’s decision to take back the two datukships from Chinese leader Chua Jui Meng.

The reason: to publicly discredit Jui Meng and prevent Johor from falling to the Pakatan Rakyat in the next general election.

“It is another diabolical BN plot. When you have Umno as the boss and a man like Soi Lek in charge of the MCA, this is the sort of dirt you get,” an MCA watcher told Malaysia Chronicle.

The news shocked the country as the withdrawal of titular awards rarely occurs and only when the recipient has committed a major crime, like murder or embezzlement. Even Soi Lek, who was filmed having extra-marital sex and performing unnatural sexual acts against the order of nature, was never asked to return his datukship.

“I am very saddened by this but I was warned that the Mentri Besar Abdul Ghani Othman would ask the Sultan to take back the titles if I joined Anwar,” Jui Meng told Malaysia Chronicle.

The 67-year old joined Opposition Leader Anwar Ibrahim's PKR last year, citing disenchantment with the BN’s unwillingness to carry out reforms. All eyes are now on another former top BN leader - ex-law minister Zaid Ibrahim - to see if he will also be asked to surrender his datukship.

A top leader in the Chinese community, Jui Meng was among the five most powerful men in the MCA during his heyday. Despite leaving the party, he still wields influence in Malaysia’s southernmost state, where he was the Bakri MP for five terms until 2004. Jui Meng was also the longest-serving Health Minister from 1995 to 2004. But recently, he publicly crossed swords with Soi Lek, whom he described as untrustworthy and treacherous compared to former MCA president Ong Tee Keat.

Soi Lek beat Tee Keat in the recent MCA party polls and has already acted to have Tee Keat dropped from the Cabinet and his followers ousted from positions of power within the MCA. Despite public outcry and accusations of nepotism, Soi Lek also insisted on securing a deputy minister-ship for his son Tee Yong, the MP for Labis.

“This is a Johor power play. But it is not just Soi Lek. Frankly, he doesn’t have the guts to move alone without the backing of top Johor Umno leaders. Muhyiddin’s name has also been mentioned,” the MCA watcher said. He was referring to Deputy Prime Minister Muhyiddin Yassin. 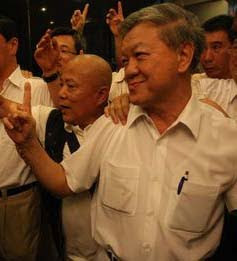 Meanwhile, Jui Meng – who says he will keep his official medals until a formal notification from the Palace – promises to step up his campaign for change.

“It is not the Sultan’s fault. To an extent, he is also a victim of our political system,” Jui Meng said.

A devout Christian, Jui Meng helped the Pakatan Rakyat win the Sibu by-election last month, reaching out to the thousands of Christians in the East Malaysian constituency with his suave and persuasive oratory. PKR leaders have reaffirmed their support for him, a member of their supreme council and political bureau.

“Gauge for yourselves whether Jui Meng has been fairly treated and then show your anger and protest at the ballot box. Jui Meng deserves justice, he has served the community and the nation long enough."

These people in UMNO/BN are full of malice and how would they be able to command any respect from the rakyat,I wonder.Is this the democracy and the1Malaysia we are shouting about.

This whole episode tak masuk akal. CJ Meng's case is obviously meant to be some form of 'punishment'.. Baguslah, now the johor MCA/UMNO/BN wearing smiles of sweet revenge on their faces. By doing this you will only implore more people to judge your vengeful behaviour, certainly not a plus for MCA/UMNO/BN..cheers!