About 45,000 people took the streets for the 'Himpunan Rakyat Bersatu' rally in Kuala Lumpur today as a counter-move to the Bersih 4 rally on Aug 29 and 30.

Umno denied having a hand in today's protest but the organiser National Silat Federation (Pesaka) is seen as a front for the party as the martial arts body is spearheaded by Umno leaders including former Malacca chief minister Mohd Ali Rustam.

Despite senior Umno leaders taking over from grassroots hardliners in a bid to tone down the rally, it was marred by racism with abuses hurled at Chinese journalists and provocative banners being displayed.

The major target of the protesters was opposition party DAP which has now become a euphemism for the minority Chinese in Malaysia.

While the rally at Padang Merbok was peaceful, violence broke out at Petaling Street where a group of almost 800 protesters tried to force their way into the predominantly Chinese business district, popularly known as Chinatown.

The tense stand-off between police guarding the area and the protesters clad in red T-shirts culminated into the firing of a water cannon by riot police. Three police officers and several protestors were injured in the scuffle.- mk 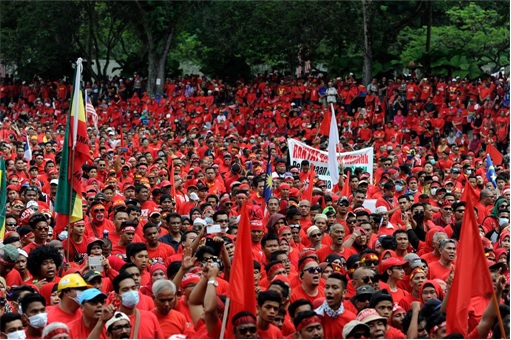 The Red and Black Shirts rally is quite a success, as far as rioting and looting benchmark is concerned, so far. They started marching at about 12:30pm and by 4:30pm the party was over. Nope, they didn’t spend 12-hour as plan earlier. Hundreds were seen to be leaving Padang Merbok at 4:30pm, heading back early to their respective buses.

Yes, the Red Shirts were so much lucky compared to Yellow Shirts in many aspects. For a start, thousands of buses were paid to transport them, mostly from outstations. In fact, there were so many buses rented that even a bus with Taylor University’s logo was spotted transporting participants. The university has denied knowledge of its usage. 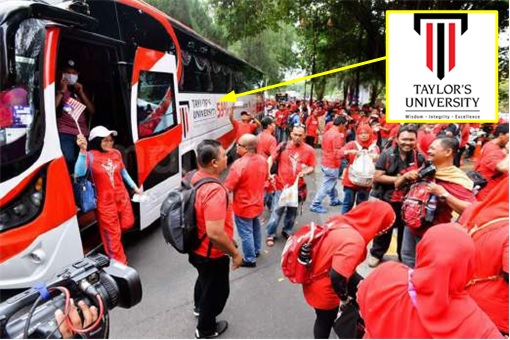 The Red Shirts were also given free food, drinks, pocket money and even pre-made placards. They were also quite good at marketing and recruiting as can be seen when they gave away food, money and red T-shirts to some homeless people along Jalan Hang Lekiu. The homeless later exposed they were asked to “Jalan-Jalan” (walking about) wearing it.

However, situation was tense at Petaling Street when about 1,000 Red Shirts reportedly strayed from the original plan to march to gathering centre Padang Merbok. These Red Shirts seem to be more interested in breaching the Chinatown which is under police barricades. FRU and police were on standby, with 5 FRU trucks not too far away. 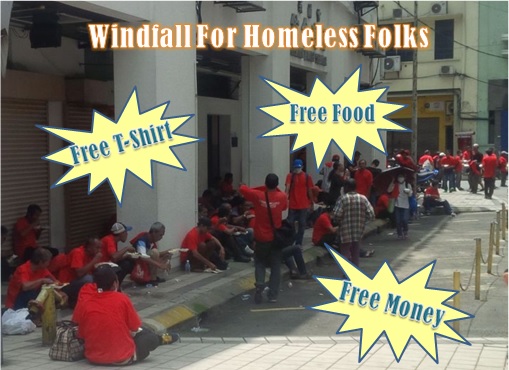 At the time of writing, FRU has unleashed chemical-laced water into the crowd who not only refused to leave after a final bell has been given, but also attacked the FRU and police with bottles and cones. Clearly, the troublemakers have other plan, probably to destroy shops along Chinatown, knowing very well that 100% of the shops are closed for the day.

Whether the chaos would spread into a much serious riot later of the day remains to be seen. It is estimated that about 50,000 strong Red Shirts crowd have marched and gathered at Padang Merbok. However, Red Shirts (what happens to the Black Shirts?) speaker Razali Idris claims 300,000 have attended the rally.

Regardless of 50,000 or 300,000 participants, there’s little doubt the crowd is very much smaller than Bersih 4.0 Yellow Shirts rally. Continue reding here... 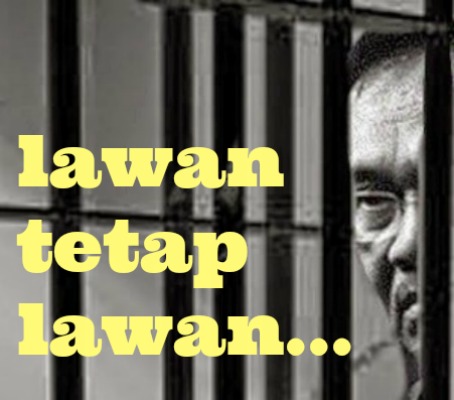