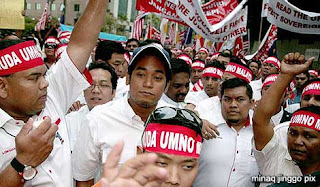 A group of Umno Youth members gathered in front of their arch nemesis PKR's headquarters in Petaling Jaya late last night in a noisy demonstration, threatening to burn down the building.

About 300 people, according to PKR estimates, had converged in motorcycles and demanded that PKR withdraws its support from the Bersih 2.0 march on July 9.

PKR secretary-general Saifuddin Nasution Ismail, who rushed to the HQ after being alerted by party members, said that he arrived at about 11pm and observed the demonstration from a distance.

"How do I know they are Umno members? First of all, they were carrying Umno flags and they were wearing their red 'Patriot' T-shirts,” he told Malaysiakini when contacted.

Saifuddin also said that when he got there with several party members, they had recorded the fiery speeches made by Lukman to the Umno Youth crowd.

"He said that he wants to burn down the PKR HQ. He can deny it all he wants, but we have the recording," he said.

PKR Youth deputy information chief Rozan Azen Mat Rasip, who was also there, confirmed that Lukman had explicitly threatened to burn down the party headquarters if they were to continue participating in the July 9 rally.

"He also threatened (PKR de facto leader Anwar Ibrahim) and (Bersih 2.0 steering committee chairperson) S Ambiga for supporting the rally," he said, adding that about 50 PKR Youth members were there to monitor the demonstration.

According to Rozan, the Umno Youth group converged in two locations - first at a petrol station in Shah Alam, second at the Batu Tiga toll on the Federal Highway - before making their way to the PKR HQ in Tropicana, based on information from pro-Umno blogs.

He lodged a police report at the Tropicana police station, just a few doors down the road from the HQ, at about 11.40pm almost immediately after the crowd had dispersed. 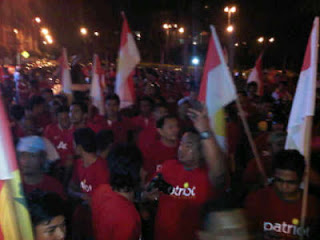 Rozan said that he saw about 20 heavily-armed police officers on stand-by at the protest although no arrest were made.

"That's why we're puzzled," he said, urging the police to investigate the case under criminal intimidation.

Though Bersih 2.0 - which stands for the Coalition of Free and Fair Elections - claims to be a politically non-partisan group, PKR is expected to mobilise tens of thousands of its members from all around the country for the massive rally on July 9. Calling for electoral reforms, Bersih 2.0 will also be handing over a petition to the Istana Negara detailing their demands before the next general elections.

However, Umno Youth said that they will be organising a counter-rally on the same day, calling it the 'Patriot' rally. Movement chief Khairy Jamaluddin Abu Bakar had previously said that their objective is to defy Bersih 2.0, as well as supporting engagement with the Election Commission.

Malay rights NGO Perkasa have also vowed to hold another counter-rally in the bid to stop the Bersih rally.