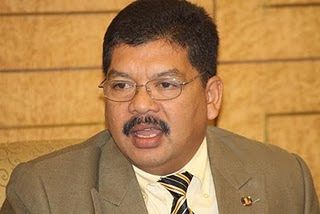 At a press conference PKR headquarters in Petaling Jaya today, Johari said documentary was the result of 34 days of research and filming, which identifies certain portions of the sex video which disproves claims the man was indeed Anwar.

“I look very different with P Ramlee, but after four hours work by make-up artist, this is how I look now," he said, referring to his video.

“Is it possible that someone has the expertise to change a person look? This question has been answered when I arrived in Bangkok, ” said Johari.

“The man in the video is not Anwar. If it's not Anwar, then it can be any other people because the art of cosmetics is very advanced these days." 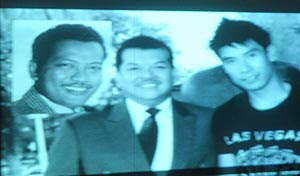 Segments of the actual sex video, with vital bits censored, were also shown in the documentary.

Certain portion of the man's body parts - chest, buttocks and belly - would be circled in red and compared to Anwar's actual photograph to show the discrepancies.

Johari also points out that Anwar no longer wears glasses after his eye surgery while the person in the video did in the beginning of the clip.

The documentary has since been uploaded to Youtube while compact disc versions would be sold to explain these points to the public.

“I have no experts to back me. This is only my personal observations and we never accused anyone. We just want to offer an alternative to people,” he said.

Asked on the risk of screening portions of the sex video today, Johari said he will take full responsibility.

“I'm a leader, I left Umno, I stood in election, I watched the video and I took the responsibility to expose everything,” he said, adding that he was playing the “same game” as Datuk T. He said that this method was better because an explanation in court would not reach the masses.

“After all, it is the rakyat who will judge,” he said. 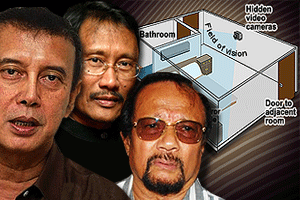 “There was a bus driver charged with three years imprisonment for showing pornography to a female passenger, but Datuk T only got a fine,” said Shamsul, who is a trained lawyer.

Rahim told reporters later that despite pleading guilty to the charge, the Datuk T group was claiming a moral victory because they had exposed an evil person and hypocrite.

Anwar has maintained his innocence and claims that the proceedings today was part of a conspiracy to tarnish his image.

Sex, Lies and Videotape in Malaysia

UMNO elites my foot! Looks more like Ulats to me!

Have you ever considered about adding a little bit more than just
your articles? I mean, what you say is important and everything.
However think about if you added some great images or video clips to
give your posts more, "pop"! Your content is excellent but with pics and video clips, this
site could definitely be one of the most beneficial in its niche.
Terrific blog!

my blog post: http://www.wildcatnyc.org/
Here is my web-site ambulance

Hello, I think your blog might be having browser compatibility issues.
When I look at your blog in Opera, it looks fine but when opening
in Internet Explorer, it has some overlapping. I just wanted
to give you a quick heads up! Other then that, superb
blog!

Look at my web page - redcoat

Hey! This is my 1st comment here so I just wanted to
give a quick shout out and say I truly enjoy reading your posts.

Can you recommend any other blogs/websites/forums that cover
the same subjects? Thanks a ton!

Hey there I am so glad I found your weblog, I really found you by accident, while I was searching on Digg for something else, Anyhow I
am here now and would just like to say thank you for a marvelous
post and a all round interesting blog (I also
love the theme/design), I don’t have time to browse it all at the minute
but I have bookmarked it and also added in your RSS feeds, so
when I have time I will be back to read much more, Please do keep up the excellent work.


Look at my web-site rotting chemical

Greetings! I've been reading your website for some time now and finally got the courage to go ahead and give you a shout out from Huffman Texas! Just wanted to mention keep up the good work!

Greetings! This is my first visit to your blog!
We are a group of volunteers and starting a new initiative in a community in the same niche.

Your blog provided us beneficial information to work
on. You have done a marvellous job!

Feel free to surf to my webpage :: profesionalna

Hello this is somewhat of off topic but I was wanting to know if blogs use WYSIWYG editors or if you
have to manually code with HTML. I'm starting a blog soon but have no coding experience so I wanted to get advice from someone with experience. Any help would be enormously appreciated!

I love what you guys tend to be up too. This type of clever work and coverage!
Keep up the terrific works guys I've you guys to my own blogroll.

Feel free to surf to my web site ... removal tools

I have loaded your site in 4 completely different browsers and I must say this website loads a lot faster then most.

Would you mind emailing me the name of your hosting company?
My personal e-mail is: hayley.hoffmann@gawab.
com. I will even sign up through your own affiliate link if you'd like. Cheers

Here is my blog: news

Hello! I've been following your weblog for a long time now and finally got the courage to go ahead and give you a shout out from New Caney Texas! Just wanted to say keep up the excellent work!

Look at my page - pc