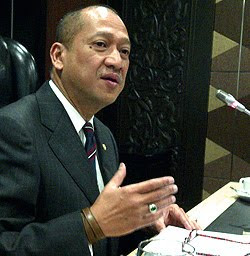 Minister in Prime Minister's Department Mohd Nazri Abdul Aziz said that it would be "dishonourable" for BN to seek Batu MP Chua Tian Chang's disqualification as an elected representative.

"As a fellow MP, it is not right for me to put a motion to seek for his removal. We are all honourable members of the house," Nazri told reporters at the Parliament lobby today.

He said that Chua's status is best decided by the speaker of the house.

"Moreover, I've to take cognisance from the first judge's decision on the matter, from the judgement it showed that he had lowered the fine to not disqualify him," he said.

Tian has lost his appeal against a conviction of obstructing a police personnel from performing his duties, which carries a RM2,000 fine. While the High Court Judge Ghazali Cha said that the amount was set in such a way as to avoid Tian from being disqualified, the Dewan Rakyat Speaker has the ultimate say on his status.

Nazri was responding to a Malaysian Insider report which quotes an anonymous BN backbencher claiming that a motion to disqualify Tian would be made.

"My personal take on this is that the matter, whether he is still a member of the Parliament or not is not for us to decide and to pursue.

"If he has been fined by the court, it's the duty of the Speaker to inform the Election Commission that because he (Tian) was fined more than the required amount, as a result of that the (could be declared) seat is vacant," said Nazri.

Nazri, who is the de facto law minister, explained that his ministerial powers would only take him as far as tabling a motion to suspend a MP for breaching Parliament's Standing Orders. "That is all. To remove a fellow member as a MP is beyond me. It's not for me. Even the backbenchers cannot do it, I would advise them not to because it's not an honourable act," he said.

However, it is understood that the backbenchers were toying with the idea following deputy speaker Wan Junaidi Jaafar's statement that the Dewan Rakyat has to be informed by the members if Tian is convicted and thereby stands the chance of being disqualified. 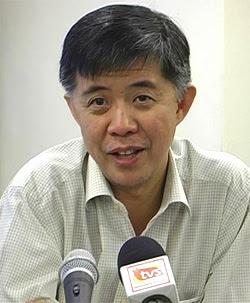 'We can't deny Batu of their rep'

The Court of Appeals last month rejected Tian's appeal against a conviction, effectively supporting last year's High Court decision to uphold his conviction and sentence of a RM2,000 fine in default of two months' jail.

Under Article 48 of the federal constitution and preceding cases, Tian stands disqualified as an MP because he was fined more than RM2,000.

"Whatever the rationale behind the (High Court) judge's decision is not my concern but I take cognisance of his and because of that I feel that Tian should not be disqualified," said Nazri.

Among other reasons, Nazri added that the Dewan Rakyat is in its third year now and declined to call for a by-election.

"Which means we are going to deny Batu of having a representative in the Parliament, which in fairness the government feels we should not deny the voters of their legally elected representative during the 2008 general election.

"So because of all these, I have decided against any move on the part of the government to disqualify him," he added.

Someone got to explain to the court, that not less than RM2,000 include RM2,000 and above.I think Najib,Mahyuddin and the Speaker pun blur about this.

Have you ever thought about publishing an ebook or guest authoring on other websites?
I have a blog centered on the same information
you discuss and would really like to have you share some stories/information.
I know my audience would enjoy your work. If you're even remotely interested, feel free to send me an e mail.

Greetings from Ohio! I'm bored to death at work so I decided to check out your website on my iphone during lunch break. I enjoy the knowledge you provide here and can't wait to take a look when I get home.

I'm amazed at how quick your blog loaded on my phone .. I'm not even using WIFI, just 3G .
. Anyhow, superb site!

I’m not that much of a internet reader to be honest
but your blogs really nice, keep it up! I'll go ahead and bookmark your site to come back in the future. Cheers

Hi, I think your website might be having browser compatibility issues.
When I look at your blog site in Chrome, it looks fine but when
opening in Internet Explorer, it has some overlapping. I just wanted to give
you a quick heads up! Other then that, awesome blog!

Hi there! I was interested to know if setting up a web site such your own: http://www.
blogger.com/comment.g?blogID=1624275106440922314&postID=784814885672203197 is tough to do for inexperienced people?
I've been wanting to develop my own website for a while now but have been turned off because I've always believed it
demanded tons of work. What do you think?
Kudos

I'm really enjoying the theme/design of your site. Do you ever run into any browser compatibility problems? A few of my blog visitors have complained about my blog not working correctly in Explorer but looks great in Chrome. Do you have any tips to help fix this issue?

First of all I want to say excellent blog! I had a quick question that I'd like to ask if you don't mind.
I was curious to find out how you center yourself and clear your thoughts before
writing. I have had a difficult time clearing my thoughts
in getting my ideas out there. I truly do take pleasure
in writing but it just seems like the first
10 to 15 minutes are usually lost simply just trying to figure out how to begin.
Any suggestions or hints? Thank you!

Doh! I was domain name searching at namecheap.

Here is my webpage; sensitivity

Today, I went to the beachfront with my
kids. I found a sea shell and gave it to my 4 year old daughter and said "You can hear the ocean if you put this to your ear." She
put the shell to her ear and screamed. There was a hermit crab inside and it
pinched her ear. She never wants to go back! LoL I know this
is totally off topic but I had to tell someone!

I was wondering if you ever considered changing the structure of your blog?
Its very well written; I love what youve got to say. But maybe you
could a little more in the way of content so people could connect with it better.
Youve got an awful lot of text for only having 1 or two
images. Maybe you could space it out better?

Look into my blog; Vaga

Heya! It seems as though we both have a interest for the same thing.
Your blog, "Blogger: tumpang sekole...?" and mine are very similar.
Have you ever considered writing a guest write-up for a similar website?
It will unquestionably help gain publicity to your website (my website recieves a lot of visitors).
If you are interested, email me at: chester-moody@inbox.
com. Appreciate it

Hey I know this is off topic but I was wondering if you knew of any widgets I
could add to my blog that automatically tweet my newest twitter updates.
I've been looking for a plug-in like this for quite some time and was hoping maybe you would have some experience with something like this. Please let me know if you run into anything. I truly enjoy reading your blog and I look forward to your new updates.

Here is my webpage; way

Have you ever thought about adding a little bit more than just your articles?

I mean, what you say is valuable and everything. However just imagine if you
added some great graphics or video clips to give your posts more, "pop"!
Your content is excellent but with images and video clips,
this website could undeniably be one of the best in its niche.
Very good blog!