Bersih 2.0 is perceived as a grave threat to UMNO elite... 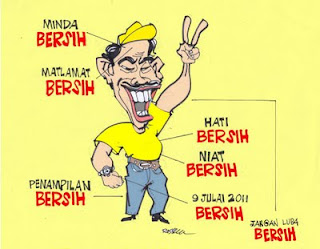 The magic of Bersih 2.0 will transform everyone in the true spirit of cleanliness, fairness and democracy. Any one attending the march will be blessed in their effort to transform Malaysia into a democracy.

The Government is dead set against the March for one reason only. Many of them will crash in the election. Many will even lose their deposits. The election will be the door to their timely exit.

The Government still thinks that the people owe them a living. They are willing to plot and scheme, hoodwink the people, even spending millions to buy votes so that they can survive the election and continue to lord over us. They are not going to surrender to the will of the people. That is why they are so against Bersih 2.0.

Why give all the excuses that a one-day rally will threaten national security? Why say that it will affect Tourism? Why say that traders and taxi drivers are going to lose millions in revenue? Why say that it will affect Malay unity? First and foremost, the Malays are not united is because UMNO refuses to accept the true path of Islam. Instead of looking out for the Malays it continues to condemn PAS, which is undeniably an Islamist Party. It also condemns Malay DAP members as window dressers for the DAP. It condemns PKR as a dirty party. And yet they talk about Malay and Muslim unity.

Why can’t the Government just come out and tell the truth that BN is going to implode if Free and Fair Elections are held? Why employ gangsters like Perkasa to rile the nation and promote racial conflicts? Why call on BN sympathizers to condemn the Rally? The excuses are so lame that it makes the people feel that our government is being helmed by a group of morons.

Why condemn Ambiga as an Islamic threat? Why picture Anwar as a sex maniac? Najib Razak’s latest comment that the Nation should decide for themselves whether it was Anwar in the Sex Video is so lame!! How can Malaysians continue to accept Najib as our National Leader? It is so unprofessional of him, to meddle in such trivial matters. Frankly, he is a big disappointment to Malaysians who looked up to him and his expensive so-called 1Malaysia campaign.

Since his inception as Prime Minister, nothing has gone right in this country. The Executive Branches of the Government have grown bolder in their effort to contain the people. They have given up their independence to be subservient to a ‘banana government’.

As the country’s economy slides further down into a ‘critical mess’, the clowns in the government are still trying to hoodwink the public with cheap magic tricks. Dipping their hands into the last remaining financial bodies and institutions like Khazanah, EPF, Tabung Haji, Felda, the wealth of the country is slowly diminishing. One day it will be all gone, before they finally hand over the reins of power to the people. 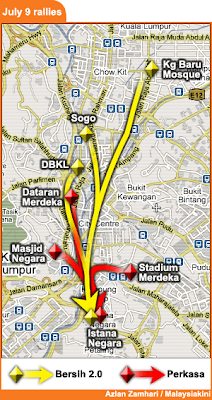 There is always a morning after

As July 9th approaches, there will be many more controversies, as the government forces a last ditch effort to break the will of the people. There will be more deadly threats, arrests and the threatened use of the ISA to detain Bersih leaders. Ops Lalang 2 will hover menacingly over the nation. There may even be Emergency Rule declared to contain and control the movement of the people.

If there, then perhaps, it is what Malaysia needs. Najib and BN will be signing the own political death warrants. Pakatan need not do much after that. Just imagine the economic impact. Already investors are terrified, who would want to build a factory or contribute to Najib and Rosmah's funding for their overseas trips then?

One thing is for certain. The Bersih 2.0 Democracy March is perceived as a grave threat to Barisan Nasional. Or more specifically, the UMNO elite. They are not about to stand by and let it happen. They think the march will open up a Pandora's Box that will swallow up BN and themselves. All their future dreams will be turned into a bad nightmare. They simply cannot accept the fact that they cannot lord over us anymore. Their serfdom is disappearing and they will once again be ordinary men, just like us.

So, now that you know, please make a stand. Malaysians, don't lose courage at this stage. Soldier on...- Iskandar Dzulkarnain

This is an excerpt from Malaysia Chronicle. Read here.

This is one thing I've been battling with mainly because I want good rankings but at the same time I want the best quality for my site visitors.

Take a look at my blog :: online
Here is my web page ; online

Do you have a spam issue on this site; I also am a blogger, and I was wondering
your situation; many of us have developed some nice procedures
and we are looking to trade techniques with others, please shoot me an email if interested.

Hi would you mind stating which blog platform you're using? I'm planning to start my own blog in the near future but
I'm having a difficult time selecting between BlogEngine/Wordpress/B2evolution and Drupal. The reason I ask is because your design seems different then most blogs and I'm
looking for something unique. P.

S My apologies for getting off-topic but I had to ask!

Here is my web blog :: http://antipoor.jinbo.net
My webpage : thumbnail

Hi just wanted to give you a quick heads up and let you know a few of the images aren't loading properly. I'm not sure why but I think its
a linking issue. I've tried it in two different internet browsers and both show the same outcome.

Heya just happened upon your blog via Yahoo after I entered in,
"Blogger: tumpang sekole...?" or perhaps something similar (can't quite remember exactly). Anyhow, I'm pleased I found it because your subject material is exactly what I'm searching for (writing a university paper) and I hope you don't mind if I gather some material from here and I will of course credit you
as the source. Appreciate it.

Look at my web site :: thrill

Heya this is kind of of off topic but I was wanting to
know if blogs use WYSIWYG editors or if you have to manually code with HTML.
I'm starting a blog soon but have no coding knowledge so I wanted to get advice from someone with experience. Any help would be enormously appreciated!

Amazing blog! Do you have any hints for aspiring writers?
I'm planning to start my own website soon but I'm a little
lost on everything. Would you recommend starting with a
free platform like Wordpress or go for a paid option?
There are so many options out there that I'm totally confused .. Any recommendations? Kudos!

Hi there! This is the fourth time visiting now and I personally just wanted to say
I truley enjoy looking at your web site. I've decided to bookmark it at reddit.com with your title: Blogger: tumpang sekole...? and your Website address: http://www.blogger.com/comment.g?blogID=1624275106440922314&postID=635623005269592427. I hope this is alright with you, I'm making an attempt to give
your terrific blog a bit more coverage. Be back shortly.

Wow that was unusual. I just wrote an very long comment but after I
clicked submit my comment didn't appear. Grrrr... well I'm not writing all
that over again. Anyway, just wanted to say superb blog!

Hello! Would you mind if I share your blog with my zynga group?
There's a lot of people that I think would really enjoy your content. Please let me know. Cheers

I'm curious to find out what blog system you are working with? I'm experiencing some minor security
issues with my latest website and I'd like to find something more risk-free. Do you have any solutions?

Surfing around reddit.com I noticed your blog bookmarked as: Blogger:
tumpang sekole...?. I'm assuming you book marked it yourself and wanted to ask if social bookmarking gets you a large amount of targeted traffic? I've been
thinking of doing some book-marking for a few of my websites but wasn't certain if it would yield any positive results. Thank you so much.