Fight me in KL if you dare, Najib 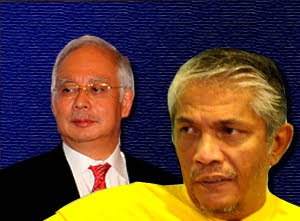 But, Haris, who is also president of the Malaysian Civil Liberties Movement (MCLM), said the Umno president must contest in a seat in Kuala Lumpur.

“If Najib wants a challenge, stop hiding in Pekan. Contest in any seat in Kuala Lumpur. I will take you on,” he said, referring to the Pekan parliamentary seat in Pahang, which was Najib’s stronghold.

Speaking on Durian FM’s live programme last night entitled “HardTalk: Bersih”, Haris was responding to Najib’s call on Bersih to stand for elections instead of taking to the streets.

However, the lawyer was confident that Najib would not take up the challenge.

Haris said Najib and Barisan Nasional leaders stood in rural seats because the urban voters were well informed compared to their rural counterparts.

Meanwhile, the Bersih leader also explained that the election watchdog was not a political party.

“It is to ensure that the 13th general election is free and fair,” he said.

Asked on why there was such a necessity, Haris replied: “Financial analysts local and abroad said that we’ll be a banana republic within the next two to three years.”

Bersih 2.0 had come under fire from government leaders over its plan to hold a rally on July 9 to press for electoral reforms.

Haris also commented on the “Datuk T” trial, which he described as a “circus”.