For Razak Baginda, the Altantuya-Scorpenes story is far from over... 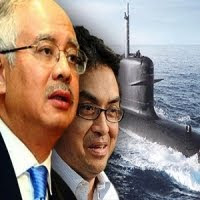 Razak Baginda is a hard man to find. His controvesial acquittal from abetting the Altantuya murder came after a prolonged murder trial and almost two years after being arrested at his office. Walking out from the courtroom a free man, he quietly relocated to the United Kingdom to continue his studies and since then has remained out of the public’s eye.

He last surfaced in Singapore on April 19th, 2010 when giving a talk on the Islamic Caliphate at Nanyang Technical University to a group of 40 participants. Other than this event, he has remained out of sight with many speculating that he has chosen to reside in the UK although he may just be keeping his head down in Kuala Lumpur, where he has lived for decades.

But all that lying low may come to an end soon as the French investigators have shown interest in his role in the RM7 billion purchase of Scorpene submarines from French firm DCN.

One of the key holders

There is also the matter of alleged irregularities in the payment of a RM570 million 'support services deal' to Perimekar, a company linked to Baginda. So far in replies to Parliament, the Malaysian government has insisted it was not a kickback to Perimekar for clinching the order but for “co-ordination and support services”. Presumably, it related to the submarines although Perimekar has no known record of such high-tech expertise.

Baginda is definitely one of those holding the keys to Najib Razak’s survival. If ever Baginda chooses to come forward to tell his side of the story, what a moment that would be for Malaysia. Statements by private investigator P Balasubramaniam to the French financial police have painted a picture of the involvement of several military personel in the Altantuya murder.

In the course of the interview, two new names also surfaced — Malaysians identified as Major Rahim and Abdul Rahim bin Saad. What roles do the two Rahims have in the murder is still unclear, but it is a more than fair assumption that Baginda would be in the know. 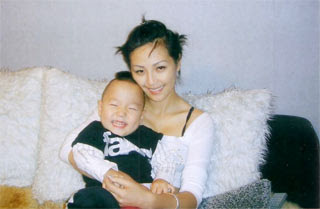 So all eyes are now shifting to Razak Baginda once again. He has been adamant in professing his innocence of the murder. Yet his link to Altantuya can never be denied.

Baginda even hired Bala to keep her from harassing his family. So while Baginda may have been just as surprised that those more ruthless and with more at stake than him had chosen to cold-bloodedly order her killing, he knows who they are.

By not revealing the truth, is Baginda not just as guilty of abettment as picking up the phone and saying 'do it, men'.

For a man of his learning and capability, it is a shame to choose to err on the side of the dark. Hopefully, one day, he will step out into the light and tell all to the world - for Altanutya is no longer just another sordid Malaysian murder and corruption case, but has gained a global stage.

From the world of academia to switching corpses

Baginda graduated with a Bachelor’s degree in politics and government from London's City Polytechnic in 1982, and gained a master's degree in War Studies at King's College London in 1984. He is certainly no idiot. A smart man with dashing good looks, he returned to Malaysia in 1988, joined the Malaysian Armed Forces Defense College as a lecturer and eventually became head of strategic studies. In 1993, he formed a think-tank called the Malaysian Strategic Research Centre, which is based in Kuala Lumpur. His abilities put him in the front-row seat to be advisor to the then-Defence Minister Najib Razak and eventually as lead negotiator for the purchase of military equipment from France.

With so much going for him, it is not impossible for Baginda to issue a “kill” order to Chief Inspector Azilah Hadri and Corporal Sirul Azhar Umar, the former bodyguards to Najib and Rosmah who have been sentenced to hang for her death. Certainly, Baginda's wife and family feared he might be made the scapegoat for Altantuya's killing. It would have so easy for the real "killers" to have just shut the prison doors on him and let him suffer the same fate as the two cops, now on death row.
But as Baginda was acquitted, there is also widespread speculation backed by visual evidence that the two bodyguards might also be allowed to cheat death.
There is much speculation the highly odd way the police have always covered up the faces of Azilah and Sirul whenever they went to court was to enable them to eventually 'escape' and return to normal life, but under different identities. Other corpses would be used when the time came to hang them, so the macabre stories abound. 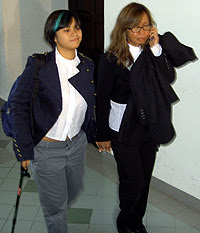 Why do these 3 men - Baginda, Azilah and Sirul - hold so much 'power'? Who or what is protecting them?

Why haven't the real "killers" opted to throw these three men to the gallows and in this way forever keep their secrets hidden? Is it because the trio has made sure that in the event the worst happened to them, 'information would leak out'.
It would be Baginda's 'information' that would be the most damaging, of course. No surprises, the French investigators would put him top on their list of witnesses. But will he go?

It is anyone's guess what Baginda will do. If he does decide to travel to Paris, what will he tell French? Would the link to Najib and all its ramifications finally come to light? Will Baginda tell the whole truth and nothing but the truth?

Or will he choose to continue riding on his current and extremely comfortable lifestyle - secure in the knowledge that what he knows puts him out of the reach of the powers that be in Malaysia? Sad to say, that may eventually prove to be his fatal mistake. - Maclean Patrick, Wong Choon Mei

Good day! I was interested to know if setting up a web site such
your own: http://www.blogger.com/comment.g?blogID=1624275106440922314&postID=4001029068719314099 is hard to do for unskilled people?
I've been wanting to create my own website for a while now but have been turned off mainly because I've always believed it
demanded tons of work. What do you think? Many thanks

Write more, thats all I have to say. Literally, it seems as though
you relied on the video to make your point. You definitely know what
youre talking about, why throw away your intelligence on just posting videos
to your blog when you could be giving us something informative to read?

I’m not that much of a internet reader to be honest but your sites really nice, keep it up!
I'll go ahead and bookmark your website to come back later on. Many thanks

my blog - stratum
Here is my web-site : aye

Today, I went to the beach front with my kids.
I found a sea shell and gave it to my 4 year old daughter and said "You can hear the ocean if you put this to your ear." She
placed the shell to her ear and screamed. There was a hermit crab inside and it pinched her ear.
She never wants to go back! LoL I know this is
totally off topic but I had to tell someone!

I like what you guys are usually up too. This sort of clever
work and coverage! Keep up the awesome works guys I've added you guys to blogroll.

Thanks on your marvelous posting! I quite enjoyed reading it, you're a great author.I will be sure to bookmark your blog and will eventually come back from now on. I want to encourage you continue your great writing, have a nice day!

Hey are using Wordpress for your blog platform?

I'm new to the blog world but I'm trying to get
started and create my own. Do you require any coding expertise to make your own blog?
Any help would be really appreciated!

Feel free to surf to my web blog Http://Sticky21.Portfoliobox.Me/Sticky21

Do you mind if I quote a couple of your articles as long
as I provide credit and sources back to your weblog? My blog is in the
very same niche as yours and my visitors would genuinely benefit from a lot of the information you provide here.
Please let me know if this alright with you.

Feel free to surf to my website ... shrub stumps
My page > removal products

Thanks on your marvelous posting! I really enjoyed reading it, you might be a great author.
I will ensure that I bookmark your blog and definitely will come back sometime soon.
I want to encourage continue your great job, have a nice morning!

Howdy! Would you mind if I share your blog with my myspace group?
There's a lot of people that I think would really enjoy your content. Please let me know. Thanks

Here is my webpage ... strec

Hello would you mind sharing which blog platform you're working with? I'm looking to start my own
blog soon but I'm having a hard time choosing between BlogEngine/Wordpress/B2evolution and Drupal. The reason I ask is because your layout seems different then most blogs and I'm looking for something completely unique.
P.S My apologies for getting off-topic but I had to ask!

Howdy would you mind sharing which blog platform you're using? I'm going to start my own blog in the near future but I'm having a difficult time selecting between BlogEngine/Wordpress/B2evolution and Drupal. The reason I ask is because your design and style seems different then most blogs and I'm looking for something completely unique.
P.S Apologies for being off-topic but I had to ask!