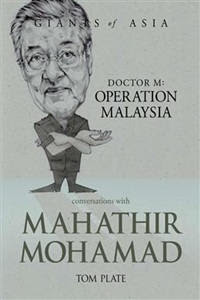 Dr Mahathir Mohamad had pointed at the direction of the police over Ops Lalang, which saw 106 people arrested including top political dissidents under the Internal Security Act in 1987. In the most recent book on Mahathir, 'Doctor M: Operation Malaysia - Conversations with Mahathir Mohamad', the former premier of 22 years revealed that he was furious over the mass crackdown.

"Well, I would have handled it differently, except that the police wanted to do these things because they say it is necessary...

"I actually met all of the opposition members (beforehand) and assured them that they would not be arrested. And you know what the police did? They arrested them. My credibility is gone," he said.

"You must have been furious!" retorted Tom Plate, the interviewer and author of the book.

"Yeah, but what can I do? You see, I have to accept that they are the people on the ground that makes a decision. I give general authority to them," continued Mahathir, who was known as a strongman who brook little dissent.

In the 1987 crackdown on Oct 27, over one hundred people - mostly opposition and a handful of MCA and Umno politicians - were arrested while the publishing permits for The Star and Sin Chew Jit Poh and Watan were revoked. The government had explained that the second largest ISA swoop since the May 13 racial riots were 'necessary' to contain rising 'racial tensions' from the protests over the appointment of non-Chinese educated principals to Chinese vernacular schools.

In response, Umno held a counter protest, where notably then Youth chief Najib Abdul Razak led a mammoth rally in Kampung Baru days prior to the arrests. Mahathir, who was the PM at that time, also said that in retrospect, he may have had some regrets over the clampdown.

"Yeah. Regrets ... I mean you have to trust the police, because you have to work with them. They are the people who have to look after security, and when they advise you that the tension is very high, that it might explode into racial riots, and they need to take this action, you can't tell them no.

"You don't, you see, because you know less than they do. See, and you have to trust the people who are the implementers. I have no means of verifying everything that they say," he said.

You don't argue with men with guns

Later on in the book, Mahathir betrays a hint of timidity with the police force. When Plate asked whether Mahathir's control over the police, even as a powerful prime minister, was not absolute, the elder statesman agreed.

"No, not absolute. You have to learn to live with the people with guns," he said. "But then, does that make you to some extent a hostage of the people who have guns?" asked Plate.

"To a certain extent... everybody is. You see, you have to give people the means to enforce, and then of course they are better equipped than you are. You have to accept the fact that when they tell you that certain things need to be done, you have to respect them.

"If you keep running them down - there have been instances where they were run down by the government as being incompetent, corrupt and all that - what happens then?" he asked, hinting that the police may in the end go on strike.