Mubarak is here to stay.... 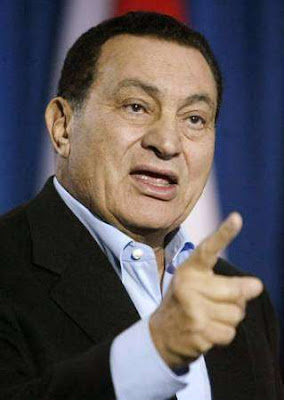 Hosni Mubarak has transferred all powers of presidency to his vice president, but remains Egypt’s “de jure head of state,” the Egyptian ambassador to Washington said yesterday.

Speaking after Mubarak stopped short of saying he was ending his 30-year rule in an address to Egyptians, Ambassador Sameh Shoukry told CNN: “President Mubarak has transferred all authority to the vice president.”

Asked if Mubarak remained the head of state, Shoukry said: “He remains the de jure head of state.” He said Vice President Omar Suleiman “is the de facto president”.

Suleiman, he said, was “now undertaking all the authority of the president under the constitution.”

Hundreds of thousands of demonstrators in a Cairo square calling for Mubarak’s ouster chanted “Leave! Leave!” after Mubarak’s speech, in which he said he was transferring powers to the vice president.

Nice work. I came across your blog while “blog surfing” using the Next Blog button on the blue Nav Bar located at the top of my blogger.com site. I frequently just travel around looking for other blogs which exist on the Internet, and the various, creative ways in which people express themselves. Thanks for sharing.