Isa Samad's appointment a big mistake for the market.... 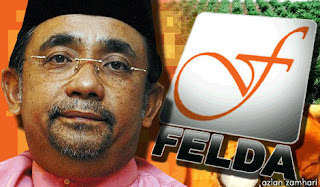 “There have been many GLCs that have ex-politicians appointed as chairpersons, but Felda is a rare case, where the market is concerned with such an appointment. It sends the wrong signals,” he said. Speaking at a forum in Kuala Lumpur today, Tengku Zafrul said a shrinking talent pool could be the reason why top posts in government-linked companies were required to be filled by a bumiputera.

While he was quite diplomatic in outlining reasons for the concern, fellow panelist and National Economic Advisory Council member Zainal Aznam Mohd Yusof put it very direct, saying Mohd Isa's track record of graft had raised alarm bells. The Umno disciplinary board in 2005 found Mohd Isa guilty of money politics during the party's elections. “It was a sad day when Isa was appointed chairperson of Felda,” said the economist, who played a major role in the preparation of the Second, Fourth and Fifth Malaysia Plans.

Zainal Aznam said real reform could be achieved if there was a blanket ban on the appointment of politicians to head GLCs. “Why not say politicians cannot be appointed, no matter which political divide you are from, or whether or not you are corrupt? “Power corrupts, so the basic assumption is that (politicians) are stigmatised as corrupt,” he said, adding that the appointment was a blow to Felda's solid reputation in the developing world.

Earlier, in his officiating address, former Tourism, Arts and Culture Minister Abdul Kadir Sheikh Fadzir lamented the state of the nation, particularly the rife corruption and cronyism. “If the founding fathers could see what is happening now, they will turn in their graves. Corruption is everywhere, you have to bribe people to get things done. Cronyism is everywhere. “There are beautiful statements (made), but they do not reflect the real state of affairs,” Abdul Kadir said.

One fine morning, Isa Samad called Najib and said,"Hey, Najib,I knew what you did in Port Dickson, so now 'lu tolong gua,gua tolong lu". It's history.