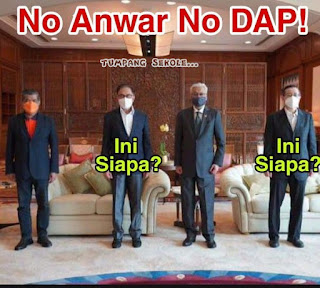 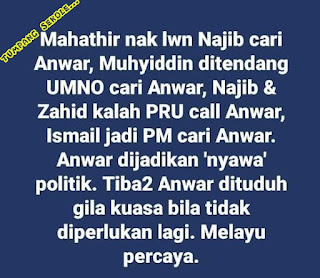 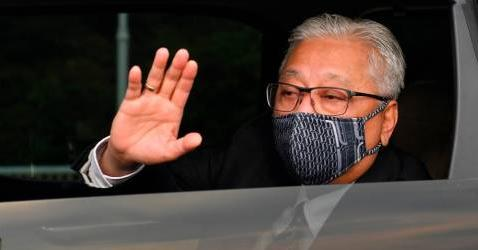 Prime Minister Ismail Sabri Yaakob will announce his Cabinet at 11.00 am today.The PM's Office (PMO) told the media that the ministers and their deputies will then be sworn in before the Yang di-Pertuan Agong on Monday from 2.30pm onwards. Kabinet buruk tu lambat nak umum pasai banyak kena repair... - dr.ts 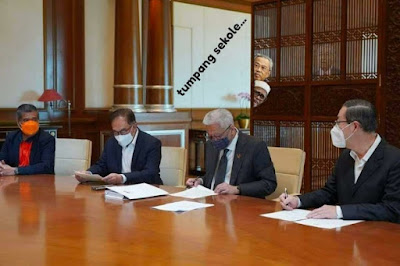 Neutralizing Azmin and Zahid - Consensus between PM Sabri and Pakatan Harapan...
Conveniently, newly installed Prime Minister Ismail Sabri met top leaders of Pakatan Harapan (the largest Opposition coalition) today (August 25). Accidentally, the meeting took place after Azmin Ali, armed with 10 MPs, threatened to withdraw support for the fragile government – unless he is made the Deputy Prime Minister. Coincidentally, Sabri and the Opposition struck a deal.
And suspiciously, UMNO president Zahid Hamidi has been hospitalized due to a fall at home last week, allowing him to avoid attending court hearings. It was a mystery that the crook hurt himself so badly on August 18, but still could attend an audience with Agong (King) the next day (August 19) and again present at the Istana Negara (national palace) for Sabri’s swearing-in ceremony on August 21.
In politics, nothing happens by accident or coincidence. If it happens, you can bet it was planned or designed that way. Azmin made his move to grab power after Sabri’s Cabinet list was deliberately leaked. And it was purposely leaked to test reactions from Sabri’s enemies in his own government, just before the final draft of the Cabinet is presented to King Sultan Abdullah for approval.
Zahid, on the other hand, was obviously faking his illness to test whether his “puppet” PM Sabri would close one eye, allowing the corrupt UMNO government to once again intimidate the judiciary to drop all the 87 charges related to money laundering, corruption and criminal breach of trust (CBT). It was already bad that PM Sabri’s balls were being squeezed each by Azmin and Zahid.
It will become worse if the prime minister loses power when former PM Muhyiddin, the biggest ally in the government, suddenly withdraws support if Azmin is not made a deputy prime minister. The issue is not merely about the tussle for the No. 2, but more about other new demands that Muhyiddin’s party Bersatu has in store for “turtle egg” Ismail Sabri.
The Deputy PM is just the appetizer. Muhyiddin, or at least the greedy Azmin, wants the crown jewel – Ministry of Finance – as well as other lucrative and strategic ministries from “proxy” PM Sabri. However, at the same time, Zahid and his influential mentor, former premier Najib Razak, also wanted the similar ministries to grow their power and influence in the UMNO party. 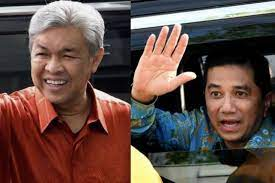 Zahid Hamidi and Azmin Ali.
Either way, Sabri is trapped between two power-hungry devils. Assuming he still has the support of 31 Barisan Nasional MPs when he tried to defend Muhyiddin’s administration during Zahid’s onslaught to topple Muhyiddin, he is still short of 80 votes in Parliament. At the last count, Zahid had managed to swing 15 UMNO MPs against Muhyiddin, leaving Sabri’s faction with only 27 MPs.
It means, at best, Ismail Sabri is extremely weak with support of 27 MPs. Muhyiddin has demonstrated that he has 35 MPs (31 Bersatu MPs and 4 independent MPs), in addition to 18 MPs from PAS Islamist party currently aligned to him. In total, Muhyiddin commands 53 MPs. Even though Zahid and Najib’s 15 MPs are small, they are sufficient to trigger a collapse of Sabri administration.
Sure, Zahid may not command the same 15 MPs anymore after UMNO is returned to power. It would be harder to justify the need to kick one of their own out. Still, UMNO vice-president Ismail, like his predecessor Muhyiddin, has a slim majority, as the government bench has only 114 MPs in the 222-member Parliament, where two seats are vacant after the death of 2 MPs.
Toppling the government is as easy as getting 4 MPs to withdraw support. Zahid and Najib certainly have more than 4 MPs on their side, if not 15 or 11 MPs. And coincidentally, on the other side, Opposition Pakatan Harapan has 88 MPs. Together, both PM Ismail Sabri and Pakatan Harapan have a total of 115 MPs, more than enough for a simple majority.
But why should the Opposition help Ismail Sabri? Has de-facto opposition leader Anwar Ibrahim gone mad for agreeing to work with the corrupt government? Have DAP secretary-general Lim Guan Eng and Amanah president Mohamad Sabu gone insane over the idea of propping up the clueless and incompetent prime minister? Haven’t they got sick and tired of being used by UMNO?
The short answer – they have a common enemy. The long answer – unless they work with the lesser of two evils, they could see Muhyiddin Yassin, Najib Razak or Zahid Hamidi return to power or even the most hated man, Azmin Ali, becoming prime minister. The enemy of my enemy is my friend, hence PM Ismail Sabri is Pakatan Harapan’s friend, at least temporarily. 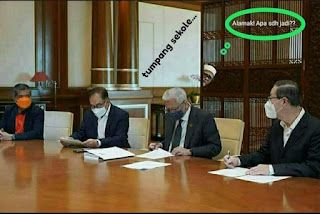 Bipartisan Consensus - PM Ismail, Anwar Ibrahim,
Mat Sabu, and Lim Guan Eng.
In reality, it’s more complicated than that. As much as Anwar hardcore supporters dislike the truth, it’s crystal clear that the PKR president does not have the numbers, no matter how much he recites the mantra that he has a “strong, convincing, formidable majority” to form a new government. Even with Mahathir’s support, Anwar only managed to get 105 MPs behind him.
On one hand, Anwar has been played by former protégé Zahid again and again. On the other hand, he could not convince Sarawak-based Gabungan Parti Sarawak (GPS) to support him. To make matters worse, none of PKR traitors wanted to return to the party, despite the collapse of Muhyiddin regime and the welcome carpet laid by PKR leaders.
With less than 2 years before the 15th General Election, Pakatan can either do nothing and wait for the election, or try the first baby steps towards working with UMNO – minus crooks like Zahid or Najib. The support from Pakatan’s 88 MPs would free Sabri from being held hostage by Bersatu and Zahid faction in UMNO. It would neutralize both Azmin and Zahid.
As much as Gabungan Parti Sarawak hates DAP for being a direct competitor in the state, Anwar isn’t popular in the rural Malay areas, the crucial vote bank delivered by Mahathir during the 2018 General Election, which ultimately led to the opposition’s stunning victory. Without Mahathir, Pakatan Harapan has no choice but to find an alternative Malay-based partner.
On paper, there are only three options – UMNO, Bersatu or PAS. Having been betrayed by Bersatu president Muhyiddin, who pulled out of the democratically elected Pakatan Harapan government and formed Perikatan Nasional backdoor government with enemies – UMNO and PAS – last year, it’s not possible for Pakatan and Bersatu (let alone PAS extremists) to work again.
The fact that PAS has chosen Bersatu, abandoning the previous cooperation between UMNO and PAS, which was glorified as “Muafakat Nasional” under the pretext of Malay-unity, has now provided more reason for UMNO to work with Pakatan Harapan. It’s worth mentioning that PAS president Hadi Awang is a bigger cheerleader of Muhyiddin than Ismail Sabri, let alone Zahid Hamidi. 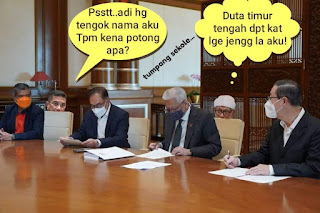 So, even without different factions in UMNO, the party has every strategic reason to explore potential cooperation with Pakatan Harapan. There will be more clashes and disagreements in terms of seats allocation and distribution for the coming election among UMNO, Bersatu and PAS than between UMNO and Pakatan. And the next election will see UMNO against Bersatu-PAS for Malay vote bank.
Based on the latest political landscape, it’s immature to say Pakatan Harapan is dumb to be used by PM Sabri to stay in power. To be fair, both sides are using each other. In the short term, Sabri is using Pakatan to ensure neither Azmin nor Zahid could threaten him. Pakatan, in return, will get reforms after a 90-minute discussion on confidence and supply agreement (CSA).
Although Anwar did not specifically mention a CSA, he said both parties have agreed today on several matters, including strengthening Parliament, ensuring judicial independence and institutional reforms in the country’s governance. Those jargons suggest that the reforms sought appear to be quite similar to those offered by Muhyiddin in his last attempt to cling to power.
But why didn’t the Opposition take Muhyiddin’s offer on August 14 then? First, it was not a sincere offer, but a dubious deal hastily hatched at the last minute to buy support. Second, Muhyiddin had betrayed Pakatan Harapan. Third, based on his track record, the former prime minister simply cannot be trusted to honour the reform deal.
Is Ismail Sabri trustworthy? Compared to Muhyiddin, Sabri is in a bigger trouble and weaker position. Naturally, the premier does not have as much leverage to play the Opposition because he has only 27 MPs, compared to Muhyiddin’s 100 MPs back then. It is understood from sources that Pakatan Harapan has asked for wider reforms beyond that offered by Muhyiddin.
The fact that UMNO vice-president Khaled Nordin and other leaders have welcomed the bipartisan consensus, and even said that there should no longer be any prejudice against the Opposition, is a strong indicator that long term cooperation could be cooking. It could provide the necessary “launch-pad” in case no party has the majority to form a new government after the 15th General Election.
Most importantly, not a single UMNO leader, including the outspoken Najib Razak, has condemned the latest bipartisan consensus, despite United Malays National Organisation’s previous chest-thumping declaration of “No Anwar, No DAP”. UMNO is more desperate, not to mention it has more to lose than Pakatan Harapan as they have to explain to the grassroots why PM Sabri is surrendering to their decade-old arch-enemy. - FT 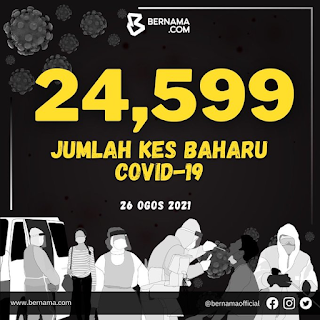