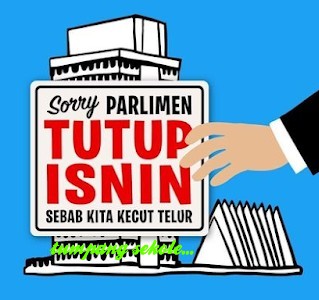 This is just the beginning, opposition MPs said despite failure to enter parliament to fulfill their duties as parliamentarians. Police meanwhile are probing protestors for breaching SOP and having gatherings despite lockdown.  111-107= 4 MPs... - melgoh 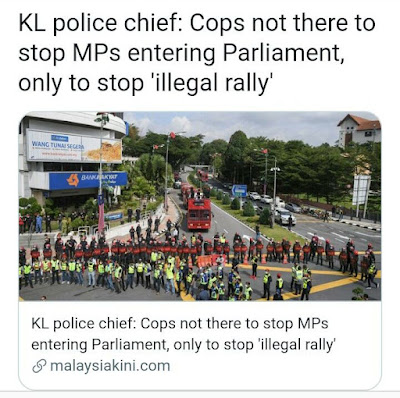 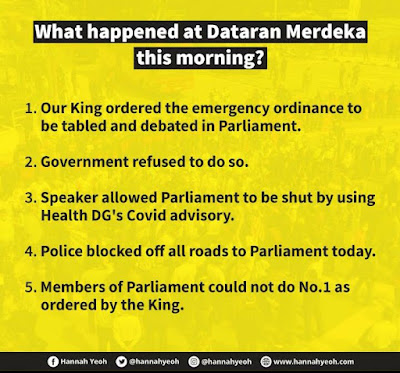 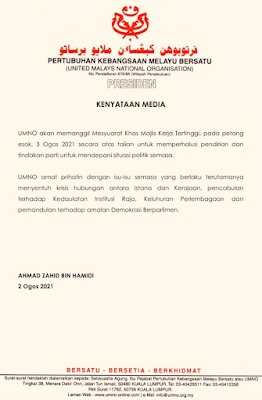 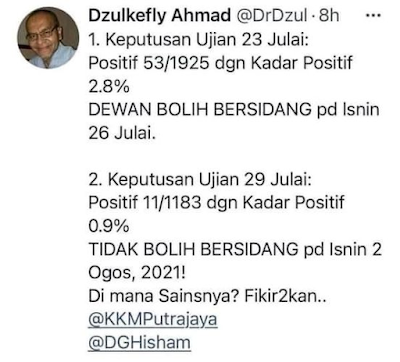 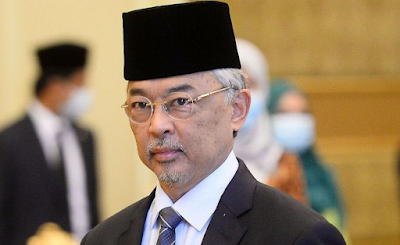 Agong has retaliated,here’s the new letter of decree for revocation of emergency to be debated...
As expected, the backdoor Prime Minister Muhyiddin Yassin has cowardly locked the Parliament again, ordering the final day of the five-day special parliamentary sitting scheduled for Monday (August 2) to be postponed indefinitely. And again, the acts of cowardice were carried out with the assistance of the over-rated Health Director-General Dr Noor Hisham Abdullah.
Under the pretext of some Covid-19 cases detected within the Parliament compound, the illegitimate chief executive has again run away from the August House. The joke on the street is that the “Malay first” PM Muhyiddin is more powerful than Thanos, but there’s only one thing he is extremely terrified of – a vote of confidence, or any vote, in the Parliament!
But why the country’s most powerful man is still so afraid of the Parliament when the State of Emergency will expire on Monday (August 2). The answer is because of a very damaging new letter from King Sultan Abdullah dated July 29, the same day the defiant Prime Minister Office (PMO) stubbornly and arrogantly issued a press statement to lecture the monarch.
On Thursday (July 29), the Agong (King) issued a royal statement, officially denied he had consented to the scrapping of emergency laws as claimed by de-facto Law Minister Takiyuddin Hassan. Worse, Sultan Abdullah said that he was “deeply disappointed” by Takiyuddin’s false statement in Parliament that the Emergency Ordinances had been revoked on July 21.
Sultan Abdullah said the government had “confused” Parliament, had “misled” Members of Parliament, had “rushed” to revoke the emergency ordinances, had “disrespected” the rule of law, and more crucially, that it had “undermined” the function and powers of the Agong as the head of state as per the Constitution. These alone are sufficient to prove that the regime has committed treason. 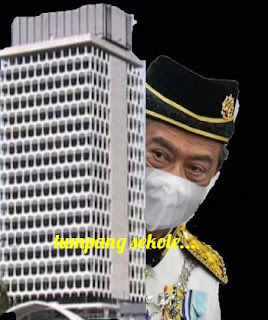 As the Parliament became chaotic over the stunning royal revelation of the regime’s treason and treachery, as well as attempts to usurp the powers of the Agong by faking the revocation of the emergency laws without the consent from the monarch, the Parliament building was suddenly put under lockdown. Cases of Covid-19 suddenly appear, forcing some lawmakers to undergo screening.
Hilariously, while the Opposition was locked in the Parliament, pro-Muhyiddin Cabinet members were allowed to travel to the prime minister’s mansion, where he has been hiding since Monday. As the scandal appeared too huge to fix, the parliament meeting on Thursday was adjourned multiple times till it was scrapped entirely for the day – under the pretext of Covid-19 cases.
The regime shamelessly and arrogantly digs in, refusing to either resign or test its legitimacy in the Parliament, even after the prime minister was caught with his pants down in a web of deceit and lies. Drunk with power, the Prime Minister Office went into spinning and twisting phase to save face, arguing that the Agong must obediently act on the advice of the prime minister, no matter what.
The PMO, shocked with the King’s stunning exposure, said in a press statement dated July 29 that Muhyiddin had written a letter to the Agong on July 23 advising the ruler to revoke the Emergency Ordinances, and again with an audience on July 27. Still, the burning question remains – why were the laws revoked as early as July 21 when the Agong only received the letter two days later (July 23)? 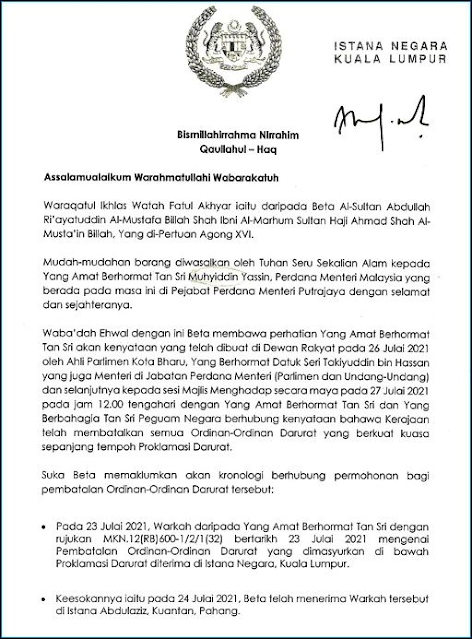 After the power-crazy Muhyiddin locked some poor MPs in the Parliament building, gathered his loyalists in his mansion and lectured King Sultan Abdullah, the next day, the prime minister wished the extremely angry monarch a “Happy Birthday”. But the damage was already done. On the same Thursday that Muhyiddin issued his press statement, the King has retaliated with his own letter of decree.
In his retaliation letter, Sultan Abdullah laid out the chronology. Apparently, the letter from Mahiaddin alias Muhyiddin dated July 23 was sent to the Istana Negara (Palace) in Kuala Lumpur. The King only received it the next day (July 24) at his palace in Kuantan, Pahang. After studying the letter, on the same day (July 24), the monarch ordered for a virtual meeting with Takiyuddin and AG Idrus Harun.
According to the four-page leaked letter, during the online meeting at about 4.30pm (July 24) with both de facto Law Minister Takiyuddin and Attorney General Idrus, the Agong had issued his decree in four areas of concerns, of which all of them had been ignored and rubbished by the government. Below are the four items of interest:
1. Agong had not consented to sign the application because it was done in a hurry – just two days before the sitting of Parliament, apart from the need for it to be gazetted.
2. Agong needed time to analyze the application in detail and subsequently to gain more opinions or insights from other (nine) Malay Rulers.
3. Agong wanted the Proclamation and the Emergency Ordinance to be tabled and debated in Parliament in accordance with Article 150 (3) of the Federal Constitution.
There are a number of questions that need further clarification, especially in relation to legal action or compound that has been issued under the Emergency Ordinances for the period between 21 and 25 July 2021. 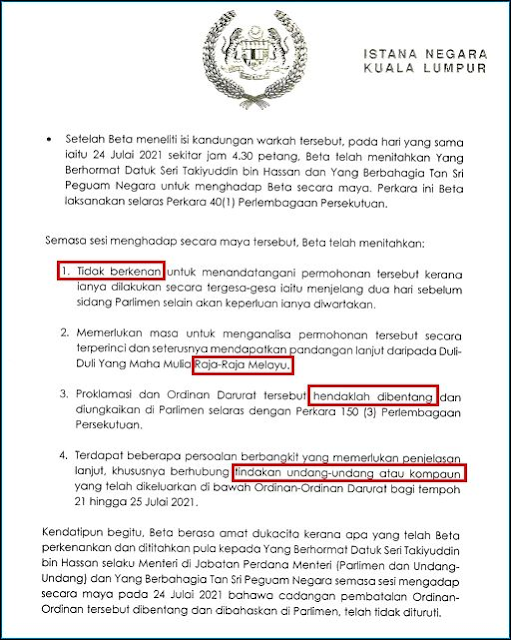 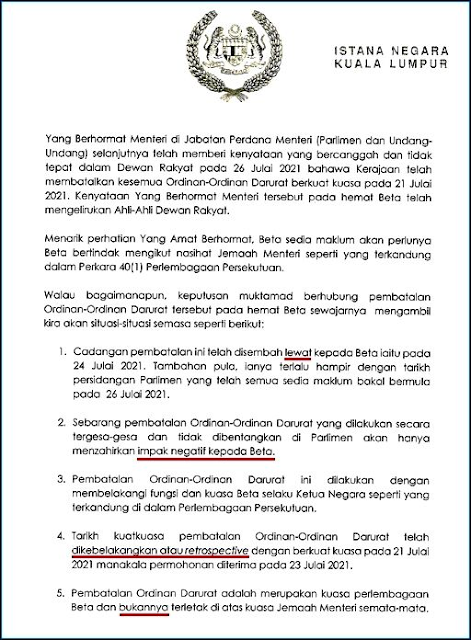 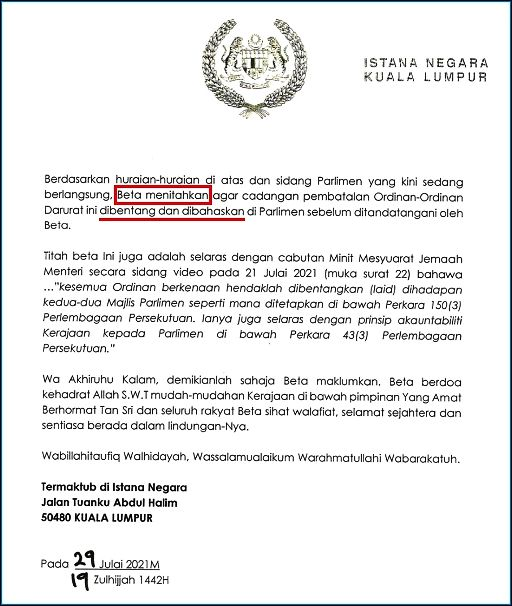 In conclusion, King Sultan Abdullah said in the letter – “I decree that the proposal to revoke the Emergency Ordinances must be tabled and debated in Parliament before the royal assent.” And that’s the reason why the panicked Muhyiddin regime has postponed indefinitely the last day of the parliamentary sitting next Monday. It still does not know how to fix the scandal.
The best part of the letter is that the monarch managed to take the opportunity to lecture the prime minister, reminding the government that all the ordinances must be tabled before both Houses of Parliament (which the Muhyiddin regime tried to avoid) as prescribed under Article 150(3) of the Federal Constitution. The King also said it must be in line with the principle of accountability under Article 43(3) of the Constitution.
Obviously, the King was smarter than Muhyiddin and his band of crooks and traitors think. The Malay Ruler did not want to sign on the dotted line because the whole scheme was illegal and unconstitutional from the beginning, and he refused to be dragged into the political game to save the backdoor prime minister as eventually, the monarch will get the blame from the people.
After previously tricked, conned, and insulted by the Perikatan Nasional government, the King also wanted to play safe by consulting his nine brother rulers, of which he was not able to because the illegitimate government of Muhyiddin wanted to rush the back door revocation in order to avoid a vote in Parliament. He finally realized that Mahiaddin just wanted to use him to do all the dirty works.
Not only the incompetent regime was late in submitting the proposal on July 24, the backdoor government had the cheek to backdate it to July 21 and wanted the Malay King to close one eye and play along with the evil conspiracy. Had the monarch blindly signed the proposal, Muhyiddin and his gang will pull similar tricks again in the future to their “puppet King”.
The fact that the King fought back, arguing that he too has the power to decide whether to give his consent or not to the revocation of the emergency laws appears to send a message to the prime minister – Agong is not a toothless tiger or an errand boy that the regime can order around. And he has presented nine compelling and legitimate reasons not to play ball. The ball is in Muhyiddin’s court now.
It’s not only Muhyiddin who knows how to dig in. Now, the King too has dug in his heels, issuing another new decree for the revocation to be tabled and debated in the Parliament, before he signs. The prime minister cannot accuse Sultan Abdullah of going against Article 40(1). The King is ready to sign, but not before all the procedures and rules are complied with, of which the regime had done none.
In the same breath, the letter of decree clearly demonstrates how the backdoor government usurps the powers of Agong with Takiyuddin’s fake claims that the revocation of the laws had been done on July 21 when in fact it could not even be gazetted because the King has disagreed. You insult the King at your own peril. Muhyiddin is toast. He is royally screwed. – FT 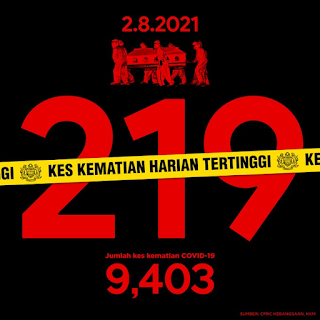