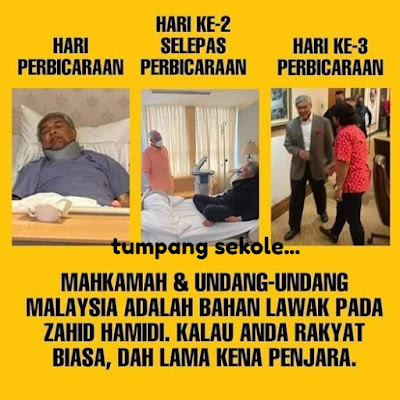 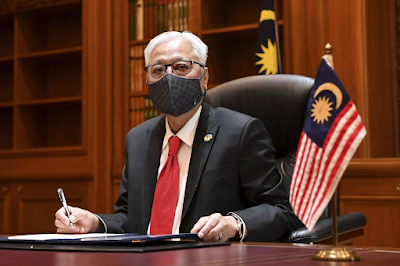 Ismail Sabri’s inane, recycled cabinet...
Looks like the main thing that bothered Prime Minister Datuk Seri Ismail Sabri Yaakob when he pondered the cabinet was who to make his deputy, given the threat hanging over him from Senior International Trade and Industry Minister Datuk Seri Mohamed Azmin Ali, who reportedly threatened to pull support if he was not given the position.
A puzzling new appointment to a recycled cabinet with hardly any new faces was that of – surprise, surprise – Datuk Seri Shahidan Kassim, a person who faced molestation charges against an underaged girl, who was made Federal Territories minister. More on that later. First, back to the issue of the deputy prime minister, or the lack of one.
If Ismail Sabri did not appoint anyone from Bersatu as deputy prime minister, then not just Azmin and his cohorts would pull out, but possibly, all Bersatu MPs, which would leave the prime minister high, dry and stranded. He was in quite a pickle for if he did not appoint anyone from Umno, offence would be taken from that quarter.
The only consolation and saving grace for that was main opposition coalition Pakatan Harapan had offered to support him in a confidence vote, which is a big thing because that amounts to 88 seats from PKR, DAP and Amanah, the three PH partners.
Even if Bersatu pulled out its 31 MPs, PH’s votes would pull him through. Why, even if part of Umno/Barisan Nasional with 42 seats withdrew, he could potentially swing it easily if PH supported him – and if Gabungan Parti Sarawak (GPS) with 18 stood by him. 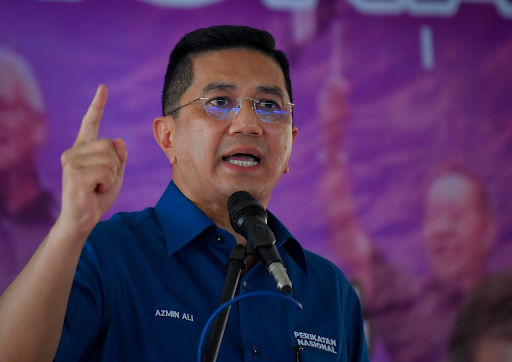 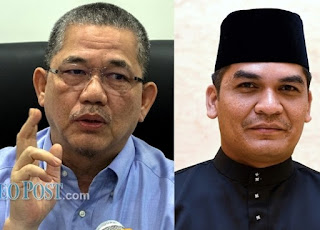 Datuk Seri Fadillah Yusof and Datuk Mohd Radzi Md Jidin
The other two senior ministers are GPS’ Datuk Seri Fadillah Yusof (works) and Bersatu’s Datuk Mohd Radzi Md Jidin (a senator, education). They do not really figure in the fight for the deputy prime minister’s post, not least because they are not from Umno.
If Datuk Seri Anwar Ibrahim was not destined to become prime minister after coming close twice, his one-time good friend who betrayed him and is now his sworn enemy, Azmin, is perhaps not destined to be deputy prime minister after being twice so close. How fate plays its cards!
But, the sum total is that Ismail Sabri is firmly ensconced in the prime minister’s seat. He was not in any danger given PH’s support for him, provided he focuses on fighting Covid-19, and ensures economic recovery, judicial independence and institutional reforms.
Perhaps, Ismail Sabri wanted more insurance, and was not comfortable with the hold that PH would have over him if he relied on the coalition for his survival as prime minister.
He could have been braver and gone for a greater cabinet mix, but a good politician seldom takes risks that he really does not have to take, which makes him less of a statesman, often – a detriment to the nation. But, survival is the name of the game when the numbers are poised delicately on the edge of a blade. Shahidan Kassim
It is a rather inane cabinet, with almost all ministers retained and some minor reshuffles. The one notable entry is a bad one: Shahidan Kassim into the powerful Federal Territories Ministry. In November 2018, he was charged in court with molesting a 15-year-old girl.
The report said he was charged under Section 14(a) of the Sexual Offences Against Children Act 2017 (physical sexual assault on a child by touching any part of the child’s body). If convicted, he faced a jail sentence of not more than 10 years and whipping.
However, in April 2019, the charges were dropped when the victim withdrew her complaint. Berita Harian reported that the decision by Kangar sessions court judge Ainul Shahrin Mohamad was made behind closed doors after hearing three witnesses, including the alleged victim.
“This case is over... There is no issue of appealing, and there were supposed to be six witnesses called in to give their statements,” the Arau MP’s lawyer Zamri Ibrahim was quoted as saying. Meanwhile, Shahidan refused to comment on the decision then, saying: “I am fasting, I am a Muslim, and I abide by the decision.”
Datuk Seri Ahmad Faizal Azumu aka Peja

An inane cabinet aside, Ismail Sabri has made his first major gaffe as prime minister – why, oh why does he have to appoint Shahidan as head of an influential ministry where there are plenty of opportunities to grant favours? This ministry needs to be led by someone who is known to be incorruptible and competent.
There is nothing else earth-shattering in the cabinet announcement. Some shuffling has taken place here and there, and another new arrival is Umno vice-president Datuk Seri Mahdzir Khalid as head of the Rural Development Ministry, which controls Majlis Amanah Rakyat. A former Kedah chief minister, he previously served in the cabinet of Datuk Seri Najib Razak.
As a concession to Muhyiddin, Ismail Sabri let in the former’s adviser with ministerial status (appointed only on August 6) Datuk Seri Ahmad Faizal Azumu as youth and sports minister, another puzzling appointment.
Overall, it is largely a cabinet of appeasement of all parties, which does not upset anyone’s apple (durian?) cart, and for that reason, it is not likely to be effective unless Ismail Sabri can shake and stir things up.That’s not his style. – P. Gunasegaram,The Vibes 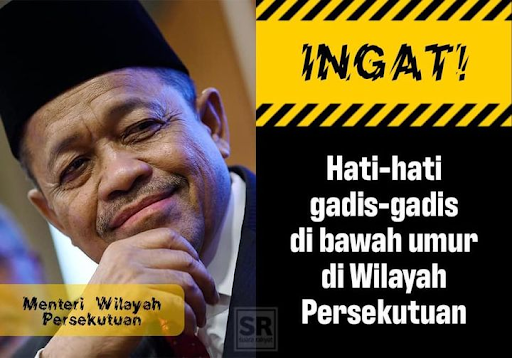 Shahidan Kassim and
Young Malay Girls...
In 2008, Datuk Seri Mohd Radzi Sheikh Ahmad was Secretary-General of Umno. Abang Lah was prime minister, and I was then in Kuala Lumpur.In early March I met with Radzi in his PWTC office to discuss Shahidan Kassim, who was then, the Perlis Menteri Besar. I informed the Sec Gen (who is also from Perlis) that there have been disturbing reports made by parties known to me, about Shahidan Kassims's sexual activities with young Malay ladies and I had been asked by these people to bring the matter to the attention of Abang Lah.
Radzi said that he was also aware of these reports and said that he personally knows of a Thai lady who has had a child out of wedlock with Shahidan Kassim and that he was in the process of getting a DNA test to prove paternity. Radzi also said that he was aware that on at least two occasions, Malay girls impregnated by Shahidan, have had abortions at the Perlis General Hospital. In fact, on that very day itself, he had brought the lady Doctor who had done the abortion, to KL, for the doctor to personally inform Abang Lah of the matter.
Long story short, a meeting was arranged between Abang Lah, Sec Gen Radzi and the lady Doctor at Abang Lah’s house a few days later and the matter of Shahidan having a child out of wedlock, the two abortions, and other unsavory sexual activities of Shahidan Kassim while he was Menteri Besar of Perlis, were brought to the attention of Abang Lah.
Unfortunately, for reasons best known to himself, Abang Lah choose not to dismiss Shahidan as MB of Perlis, and he instead decided to shoot the messenger. A few days later, I was again at Radzi’s office, this time to help him pack and clear his office as Abang Lah has asked him to step down as Umno’s Secretary General. 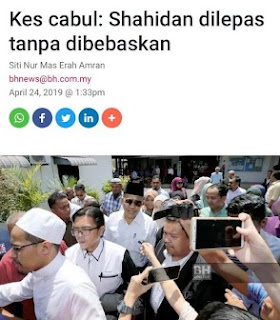 What of Shahidan Kassim?
There were other reports made of his philandering and his abuse of young Malay girls to satisfy his deviant sexual needs. A 15 year old Malay teenager from Arau, Perlis, made a police report in which she related how she was told by her teacher that Shahidan had wanted to see her after he saw her perform with a band at Stadium Tuanku Syed Putra. According to her, when she went to the Shahidan’s car, he invited her to play in Kuala Lumpur and offered her a RM4,000 fee. She alleged that during the discussion, he held her hand and caressed her shoulder without her consent. The student said she immediately ran out crying.
On 20 October 2018, a police report was made by the teenage girl, 15, alleging that Shahidan had molested her. The report was withdrawn by the victim’s family on the same day. It was speculated that the family has taken the decision due to bribery.
In 2021, Shahidan’s initial selection for the women, children, and social development affairs Parliamentary Special Select Committee (SSC) had to be rescinded and replaced by another MP after his appointment was widely condemned and objected as he is claimed to be ‘tainted’ with his child molestation case in 2019. And now, he was appointed Federal Territory Minister by Mail Bera. Enough said. - Hussein Abdul Hamid 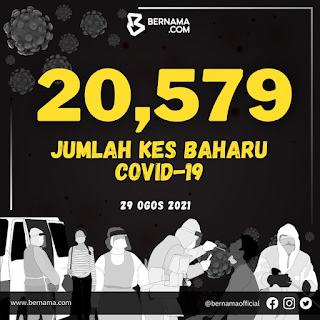