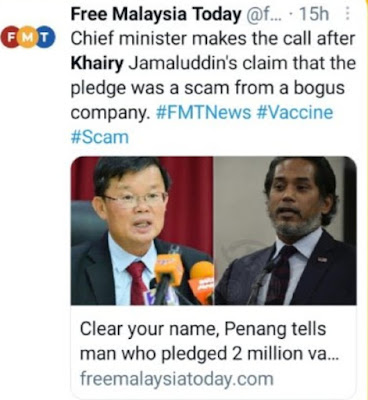 The whole nation is suffering and you have a politician who thinks playing politics is more important than saving lives...Scam??? or are U trying to squeeze something from the donor???
An employee of a Hong Kong-based private company that offered two million doses of the Sinovac vaccine to the Penang government said that it was a genuine offer.Yong Chee Kong, 58, said it was unfair for a federal minister to label the offer made by him and Xintai Enterprise Development Ltd, an investment company, a “scam”.
According to Yong, his Hong Kong-based employer had told him to write to the Penang government to offer the vaccines after their letter to the Sabah government was rejected by the health ministry last January. “That’s why I had to go to an opposition state,” he said, when contacted by FMT. Read full story here, here and here. 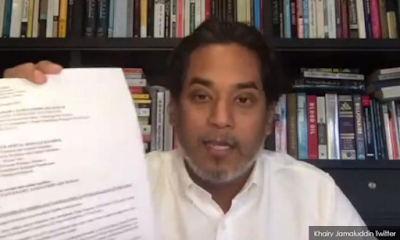 Let states procure vaccines on their own...
It is sheer stupidity for Khairy to demand proof of having ordered the vaccine when he himself has along refused permission for Penang to receive the donated vaccines. It is like putting the cart before the horse.  Shouldn’t the approval come before the order, and not after?
If Khairy is sincere and genuinely has the interests of the people at heart, shouldn’t he have just welcome and expressed gratitude for the donation and let the Penang state government handle the rest?
Lastly, is it reasonable for Khairy to ask for the donation to be made to the Federal government, and in cash? And I think donor Yong has made the right decision when he wisely said that he refused to pay to “a company in Kuala Lumpur” as he would procure the vaccines himself at much cheaper cost... - Kim Quek 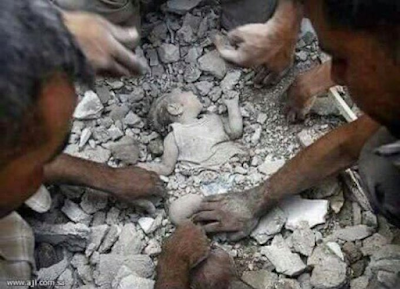 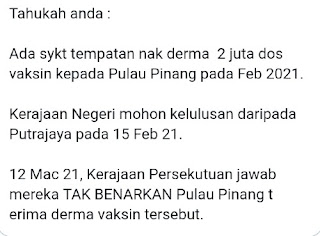 What is usually a calm atmosphere at the Penang chief minister’s press conference became tense today when DAP secretary-general Lim Guan Eng hurled criticism at the federal government for rejecting two million Covid-19 vaccine doses from a private company.
Lim, who was invited to today’s press conference, blurted “kepala otak dia” (what are they thinking) in reference to the Perikatan Nasional (PN) federal government’s move. He also described PN’s rejection of the vaccines as a crime.
“Political donations are allowed, vaccine donations are not allowed. Kepala otak dia! 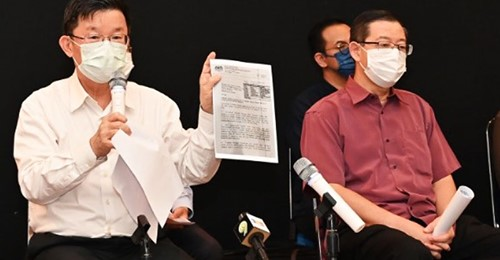 “I’m sorry, I’m very angry. How can this happen? If we receive two million doses of the vaccine, we can save many people,” Lim said in Komtar today.
Earlier, Chief Minister Chow Kon Yeow revealed that the Penang government had in February received a donation of two million vaccine doses from a private company as part of its corporate social responsibility (CSR) programme.
However, the state government’s application to accept the vaccine, which was made through an official letter to the secretary-general of the Health Ministry, was rejected on March 12. The rejection was made on the grounds that the government had already designed and implemented a nationwide Covid-19 immunisation programme. - theVibes
However, Lim felt that the state government should accept the free vaccines and deal with the consequences later.
“I want to propose to Chow, just take it. If they (Putrajaya) want to punish us, let them do it. What's wrong with this country? Rejecting free vaccines!” he thundered.
“I propose that the state government take it and let them (the authorities) confiscate it (the vaccines). I will leave it to Chow and the state government to handle this, but this is a crime,” he added. Lim, who noted that the people were furious over the issue, was unable to contain his own feeling of indignation on the matter. - mk 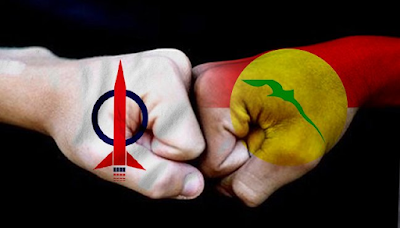 Who is afraid of UMNO and DAP
working together?...
The chance meeting between Wanita Umno chief Noraini Ahmad and Bangi MP Ong Kian Ming (below), characterised by some as some sort of “normalisation” of a possible political hook-up and denounced as fitnah by others, is the kind of immature politics that defines mainstream narratives in this country. The reality is that there are elements in the Malay political establishment that do not want to see any cooperation between the two biggest race-supported parties in this country.
Those who wish such support are compromised and, therefore, have to walk that fine line between trolling the current Perikatan Nasional (PN) government and establishing some sort of rapport till a possible post-election game-changer would necessitate an Umno/DAP hook-up.
The biggest stumbling block coming from the DAP - besides the often conflicted and confused rhetoric from political operatives - is that the DAP will not work with tainted leaders. This, of course, is complete horse manure. The DAP, by making its Faustian bargain and working with Bersatu, demonstrated that working with morally suspect and corruption-tainted politicians was not an impediment to “saving Malaysia”.
Indeed, when Pakatan Harapan briefly formed the federal government, and Bersatu was accepting Umno frogs, the DAP bent over backward attempting to justify why Bersatu accepting Umno members was part of the grand plan to save Malaysia.
Meanwhile, the Umno grassroots who for decades were fattened by the propaganda and resultant entitlements that came with demonising the DAP, have to be reoriented that working with the DAP was not the end of bangsa and agama. 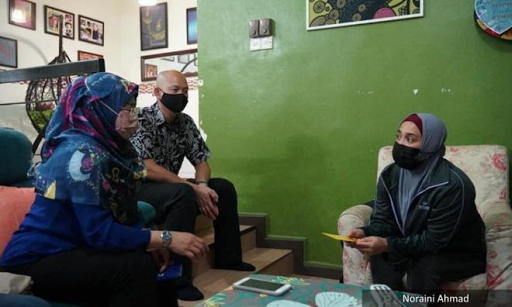 Wanita Umno chief Noraini Ahmad and Bangi DAP MP Ong Kian Ming
Honestly, I do not see this as much of a hurdle because as far as partisans are concerned, Harapan and Umno, it is much as how Orwell defined doublethink - “Doublethink means the power of holding two contradictory beliefs in one’s mind simultaneously, and accepting both of them.”
Any sort of cooperation, of course, would have to happen after the dust settles in the next general election - if we have one - as many strategists in Umno and the DAP have said. And, of course, any form of cooperation would be defined by how PKR positions itself as the only viable contender for the crown of Putrajaya.
What the DAP brings to any kind of coalition is the majority backing of a voting demographic and, hence, they can claim to be the “voice” of the community on secular and egalitarian issues. The fact that they have to downplay such aspirations proves how well they can play with weak factions of the Malay political establishment.
Now, imagine if they could do this with Umno, which is a vital part of the Malay power structure, and work on a reform agenda which many in Umno know needs to be carried out if Malaysia is to remain a viable democracy and not some sort of theocratic nightmare.
There are many in Harapan who believe that any sort of cooperation with Umno is untenable and what they wish to see is Umno continuing to implode and Harapan achieving some sort of landslide in the next GE, which could mean that Harapan (with its allies) are in a position to dictate terms or secure enough seats to reject any cooperation with Umno.
After decades of witnessing the power plays between two coalitions, I see no need to replicate the formula that brought us to this mess in the first place. And by formula I mean coalitions of "unequals" pretending to be unified in political ideology when there was no common framework beyond appeasement. 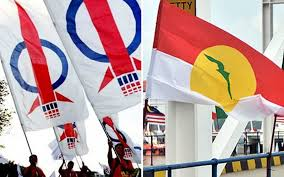 The fact that governments could collapse may seem like an unstable political and economic gambit but this is a far better proposition than what the previous stability brought us, which was the radicalisation of the majority and the polarisation of the minority.
An Umno elected official who falls neatly into the moderate camp but who is aligned with someone from the "court cluster", tells me that working with the DAP would be far better for Malaysia than working with theocratic PAS, even if it meant more “headaches”.
And therein lies the rub. These headaches are not really genuine policy issues but rather manufactured outrages, to demonstrate the superiority of race and religion through the political apparatus. All of this has to stop of course, because in these pandemic days, the economic and social reality of decades of political neglect is coming home to roost.
I welcome the aftermath of the next GE because it would force disparate political power groups to attempt to form a government and nobody will be secure in their positions. The Sheraton Move was an attempt to define what a Malay uber alles (above all) government could do, and what they have proved is that unity based on race and religion is not feasible, especially when it comes to the urban/rural dichotomy.
What is driving Malaysia apart is the fact that the illusory nature of political stability based on the “social contract” was broken by, first, the ouster of Anwar Ibrahim from Umno paradise and the gradual erosion of federal BN power, which culminated in the brief Harapan win the in the last election. Do not fear the political instability that comes, but rather fear the further fossilisation, if Umno and DAP never find common ground, however they define it.- S Thayaparan,mk 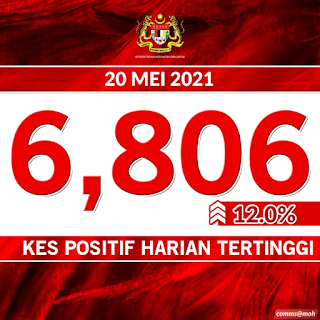 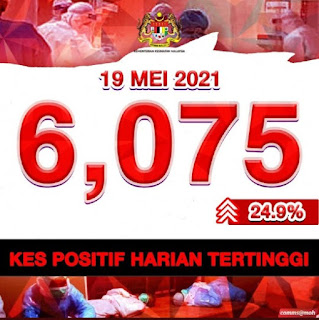