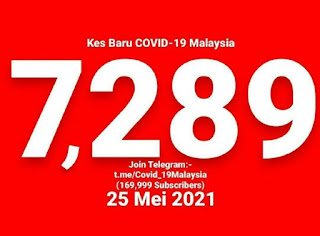 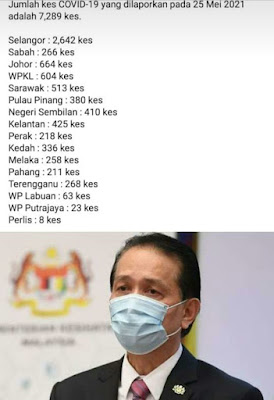 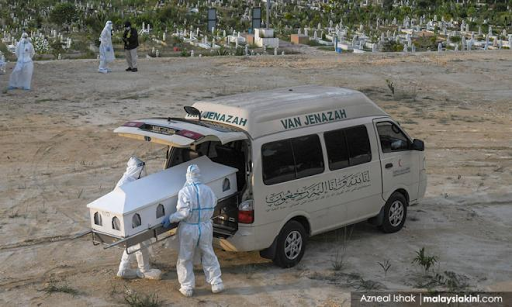 How come 2 fast moving trains in opposite directions
can be on the same track?...
The driver of the LRT train without passengers, had driven in the wrong direction, says transport minister Wee Ka Siong. At a press conference, Wee said preliminary investigations indicate that human error was to blame for the incident last night, which resulted in 47 passengers being seriously injured.
He said the Land Public Transport Agency’s (Apad) investigations found that the train driver, or hostler, of train number 40 failed to follow the correct orientation. “Initial findings have found that the accident was caused by negligence of the hostler who was driving TR40 in the wrong direction,” he said. The hostler, who was travelling northbound, instead of south, then collided with TR81. YB Menteri yang straightforward mengaku train driver punya silap... 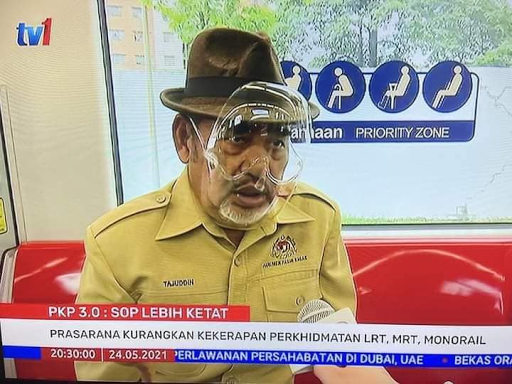 No point asking this guy coz he knows nothing... 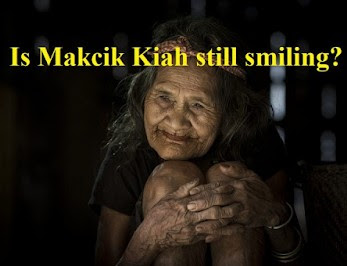 Is Makcik Kiah smiling, now?...
Just over a year ago, Muhyiddin Yassin presented the People’s Economic Stimulus Package (Prihatin), worth around RM250 billion to ease the burden of the rakyat. To illustrate the aid which the average Malaysian would receive from the government, he used a fictitious woman called “Makcik Kiah”, to show the cash support and savings she would accrue over a six month period.
In his speech in March 2020, Muhyiddin calculated that Makcik Kiah and her family would receive RM8,664 of aid over a six month period, or RM1,444 per month. He claimed that her total savings would be RM4.464. He proudly boasted, “Even Makcik Kiah can smile a little, after listening to my calculations.”
To remind readers, Muhyiddin’s Makcik Kiah sells banana fritters (goreng pisang) and lives in a government housing project. Her husband, a government pensioner, earns extra income as a Grab driver. Their daughter borrowed money from the government’s PTPTN student loan scheme. Their unmarried son lives with them.
In reality, Makcik Kiah is livid. She does not have any savings, nor does she have the money to pay off any of her commitments, such as her rent, car loan, her electricity bill or her daughter’s student loan.
In the Prihatin package, these payments were suspended for six months. They were not waived. So, what will happen when she is forced to resume making the payments? Makcik Kiah did not save RM4,464. Deferred payments cannot be called savings. She was misled.
During the lockdown, Makcik Kiah was unable to sell goreng pisang. She could not earn any money, her husband, a Grab driver was in a similar position. As she is unable to pay her bills, Makcik Kiah will end up deeper in debt. Petty traders like her, want to know if there is a stimulus package for Small to Medium sized Enterprises (SMEs), the backbone of the economy. 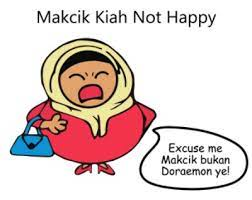 Despite not being able to trade as normal, businesses still had to pay rent and service charges. Many were forced to close down and make their staff redundant. The owners and employees have loans and family commitments, such as educational loans. What help is the Finance ministry offering these people?
It is not just petty traders who are angry. Green Identity Card holders and stateless people are ineligible for aid from the state. One green IC holder said, “As far as the government is concerned, we do not exist. So how can we apply for state aid?” Many of these people are illegitimate children or children of parents who are illiterate. They were unaware that the birth of their children had to be registered.
Friends who run soup kitchens have admitted that more people are utilising their services, so that they can at least get one decent meal a day. One attendee who joined the soup kitchen said, “Last year, I had a decent job, but when the Coronavirus pandemic worsened, my boss closed shop and fired his staff.
“I have no money to buy food and I cannot forget the photo on social media, of parliamentarians eating a meal of lobster, when outside parliament, people are starving. “Some friends get food parcels from NGOs to feed their families. We are suffering.”
The Makcik Kiahs of Malaysia are appalled by the double standards practised by the ministers. One man said, “We have the biggest cabinet in the history of Malaysia, but most are doing nothing (gaji buta) and do not deserve their exorbitant salaries. One month of their wages can ease the rakyat’s suffering”.
Ministers and civil servants have not been made redundant, and  receive special bonuses. Ordinary workers suffer pay cuts and despite the depressed business conditions, employers need money for their workers’ wages.
Another person said, “The ministers are free to travel overseas, to seek foreign investors. We can’t even travel from one district to another, like from Kuala Lumpur to Petaling Jaya, to earn a living. How fair is that?”
Double standards have angered the rakyat. Quarantine rules are relaxed for ministers. The SOP for the Coronavirus pandemic is ignored by politicians and celebrities. When they openly flout social distancing,  they were fined, only after a public outcry. 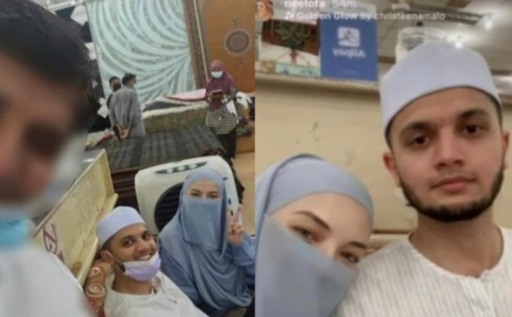 Actress Neelofa was fined RM60,000, a drop in the ocean for her, whereas a burger seller, who was cleaning the premises, after closing his stall, was told to pay a fine of RM50,000, a sum that he could ill afford.
Petty traders are also furious with the flip-flop about trading laws. After pressure from food hawkers, the government said that Ramadhan bazaars could open till 2am. The relaxation in lockdown rules after little consideration caused another spike in Coronavirus infections.
Food sellers were livid when the rules changed again and they were told they could not trade. Many demanded compensation for the food which was wasted. They said that the poor communication was both erratic and confusing. Lack of information and late announcements of school openings have angered many parents and teachers. In addition, Malaysians were appalled by the slow vaccination roll-out.
Others were angry at the lack of a concerted plan to manage the Coronavirus pandemic. The bad example set by ministers made people increasingly reluctant to observe the rules. As the disease has not been taken seriously, infections and deaths, have risen. Reports of refrigerated containers being used as temporary  morgues have caused alarm.
Unemployment, children’s futures being uncertain, and the more contagious variant of Coronavirus are all cause for concern. Makcik Kiah is not smiling, but what is the government doing to address her fears? - Mariam Mokhtar
There have been signs the Perikatan Nasional government will not impose another full lockdown like MCO 1.0. Finance minister Tengku Zafrul assured Malaysians in January that the country would not impose another lockdown no matter how bad it gets. As such, the government will not enforce a complete lockdown even though daily infection numbers soar above 10k because there is a very hefty political price to pay. How is PN going to win the election if unemployment rate soars and many in the B40 group have to go without food?
PN ministers have painted a sinister picture of another lockdown. Ismail Sabri has said lately that some household only had plain rice with salt for food during last year's MCO, while Tengku Zafrul says one million people could lose their jobs in the event of another lockdown, and that as many as 2.6 million EPF contributors have less than RM1,000 in their first account.
Meanwhile, PM Muhyiddin Yassin says the government may need another RM500 billion to help the people and revive the economy. The PN government simply cannot afford to take the risk. Now that a complete lockdown is out of question, the PN government urges the public to exercise self discipline to help contain the virus. 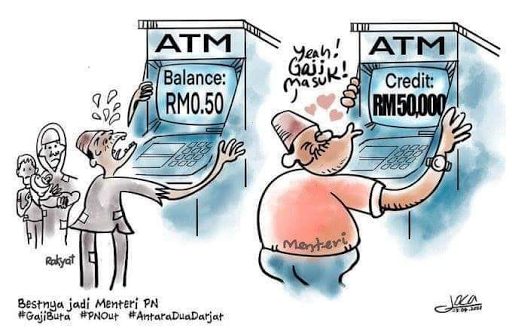 Health DG Noor Hisham Abdullah has asked Malaysians to conduct "self lockdown". That said, the public will only cooperate if the government has displayed strong leadership with effective anti-virus plans to win the trust of the people. Frequent SOP violation by VIPs proves that self discipline is much easier said than done.
If the enhanced version of MCO 3.0 works, and we can sustain until the end of the year when herd immunity is supposed to be achieved, then the people's livelihoods as well as the PN government can be saved. But if the vaccination progress remains sluggish and illegal migrant workers in hiding are not vaccinated, sparking an exlosive growth of infections, then it's game over for the PN government.
So far the PN government has already been tagged by many as a "failed government" (kerajaan gagal). Former health minister Dzulkefly Ahmad has highlighted, quoting statistics, that Malaysia's COVID-19 incidence rate has soared past badly hit countries like India and the United States to be among the top in the world. How are we going to lure investors and restore the country's economy if the PN government is unable to clear the country's name before the year ends? The government should not overlook this crisis, and its most pressing task now is to seek the advice of medical experts to help tame this powerful virus. - Lim Sue Goan, Sin Chew Daily 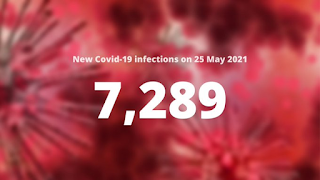