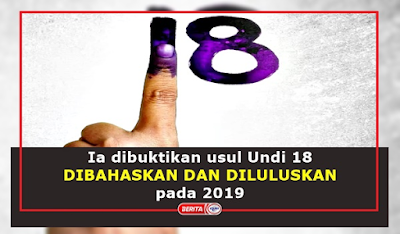 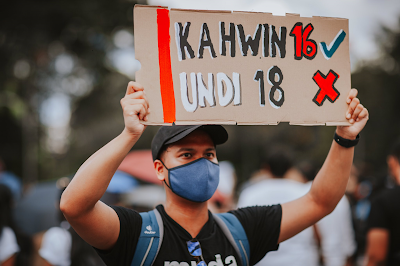 UMNO in self-destruction...
It’s now close to a week since Umno president Ahmad Zahid Hamidi proudly declared that the party will not work with opposition leader Anwar Ibrahim, Democratic Action Party (DAP) or Parti Pribumi Bersatu Malaysia (Bersatu or PPBM) in the next general election. But despite Umno’s thunderous decision to sever ties with PM Muhyiddin Yassin’s PPBM, its business as usual.
Java-immigrant Zahid is now trapped – and humiliated – after all the Umno ministers and deputy ministers refused to obey the motion passed by the party delegates at the Umno General Assembly 2020 last Sunday. None of the nine Umno ministers or eight deputy ministers have resigned. At best, they pretended there was no such motion. At worst, they have disrespected their own party.
Prime Minister Muhyiddin didn’t have to try very hard to convince the 17 Umno ministers and deputy ministers to remain in the backdoor Perikatan Nasional government. The power-hungry Umno warlords were more than willing to keep their cushy jobs. Again, under the excuse of fighting Coronavirus and serving the people, all the selfish and corrupt ministers decided to stay.
To be fair to the Umno Minister Cluster who shamelessly chose enemy PPBM over their own party, the weak and indecisive leadership of Zahid provided the convenient excuse for them not to resign. The Umno General Assembly agreed to give the party president and supreme council the mandate to determine when the party should withdraw its support for Perikatan Nasional.
Exactly why the Umno General Assembly could not decide that all Umno ministers and deputy ministers must resign “immediately” is beyond comprehension. To make matters worse, Zahid, a “jaguh kampung” (village champion), was too afraid to issue an ultimatum to all the Umno MPs to resign – creating a bigger question mark over when should the ministers resign.
Zahid only said – “Delegates have given me the mandate to withdraw at any time if Perikatan Nasional does not indicate a willingness to call elections soon. If we withdraw based on the party’s decision, the Supreme Council, especially those who are ministers, deputy ministers and GLC chairmen, as well as MPs, will adhere 100% to the directive. They will not hesitate to resign.” 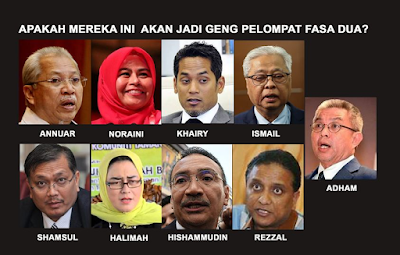 Was the half-baked statement from the Umno president supposed to spook the cunning backdoor prime minister and his band of traitors? How soon is soon, according to Zahid’s definition? What if Muhyiddin, together with his lieutenants – Senior Minister Azmin Ali and Home Minister Hamzah Zainudin – drag the Covid-19 pandemic until 2023 before calling for the 15th General Election?
What the backdoor prime minister needs to do is to just keep quiet and enjoy popcorn while watching Zahid Hamidi and Najib Razak squirm like a worm. It’s not hard to understand why the useless Umno president was afraid to issue the executive order. He knew very well from the beginning that none of the 17 Umno ministers and deputy ministers will resign, even if he tells them to do so.
That’s why outspoken Umno warlord Nazri Aziz has mocked and insulted his own president for lacking leadership. Zahid, well known for his thuggish behaviour, would look like a “paper tiger” if he instructed the Umno MPs to quit the Cabinet only to be ignored. Worse, it would open the door for his leadership to not only be questioned but also challenged and eventually overthrown.
The 68-year-old corrupt Zahid, whose place of birth was Ponorogo in Java, Indonesia, was not a leadership material to begin with. He was elected as the 8th Umno President in 2018 largely due to bribes. Yet, despite splashing a truckload of money to buy votes, the clown won only 99 electoral votes from 191 Umno divisions and captured only 42.4% of the popular vote.
Initially afraid to debate with opponents Khairy Jamaluddin and Tengku Razaleigh Hamzah on stage during the Umno presidency campaign, Zahid finally agreed to the debate challenge, but only to do so from his constituency behind the screen. Under his leadership, Umno saw its MPs leave in droves, forcing him to go on garden leave in Dec 2018, only to return six months later.
While disgraced Najib Razak faced a total of 42 criminal charges related to corruption, money laundering, and criminal breach of trust (CBT), the despicable Zahid was slapped with a record 87 charges for similar offences during the previous Pakatan Harapan coalition government. It’s highly likely Zahid will be convicted, after his former boss Najib was sentenced to 12 years in prison. 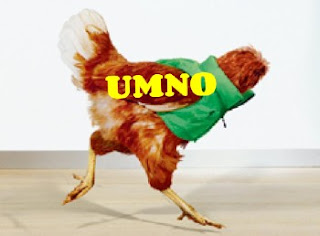 The once mighty and invincible Umno is running around like a headless chicken, with no clear direction. While its president has issued empty threats to pull Umno out of the Perikatan Nasional any time, the party adviser Tengku Razaleigh said Umno MPs should resign immediately. Umno deputy president Mohamad Hasan, on the other hand, said the party could quit in August.
Umno leaderships should make up their mind. Should the Umno MPs, ministers, deputy ministers, GLCs chairman and whatnot resign now or in August or wait for PM Muhyiddin to dissolve the Parliament or wait until 2023? Zahid was so clueless in leading the party that he may lose his job before Muhyiddin has to decide whether to call for a snap election or not.
Science, Technology and Innovation Minister Khairy Jamaluddin, who came in second with 61 votes in the 2018 Umno election, is pushing for the party to hold its internal elections this year in order to resolve its internal issues ahead of the next nationwide election Clearly, the Umno Minister Cluster is preparing to send Zahid into early retirement, even before the verdict of his corruption trials.
Zahid’s corruption, cowardice, and lack of leadership are just part of the problem. Umno today is in self-destruction mode largely because the party warlords are split between Minister Cluster and Court Cluster. And that’s because there is zero loyalty to the party, but only loyalty to power, positions and projects. It’s true that cash is king, the philosophy of former Umno president Najib Razak.
Unlike opposition parties such as PKR (People’s Justice Party), DAP (Democratic Action Party) and Amanah (National Trust Party), the warlords of Umno had enjoyed the good life as the ruling party since independence in 1957 – until its stunning defeat in the May 2018 General Election. Corruption, abuse of power and arrogance of power were part and parcel of Umno leaders for 60 years. 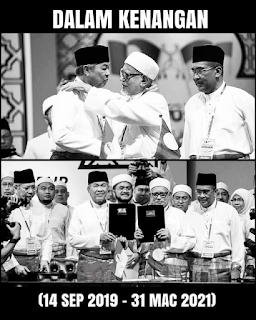 As admitted today by M Saravanan, deputy president of MIC, a component party of the Umno-led Barisan Nasional (BN) coalition, BN component parties had no experience in facing the general election as an opposition bloc. Yes, when even a running dog like MIC could not face the hardship of running an election campaign as the Opposition, what more a top dog like Umno.
The fact that minor component parties of BN – MCA (Malaysian Chinese Association) and MIC (Malaysian Indian Congress) – disagreed with Umno president Zahid Hamidi in cutting political ties with the ruling coalition government speaks volumes about addictions to money, power and positions. Do you really think warlords like Khairy or Hishammuddin Hussein are loyal to Umno?
When the BN lost its power for the first time in history in May 2018, Khairy, the son-in-law of former Prime Minister Abdullah Badawi, was nowhere to be seen. Hishammuddin, the cousin of crooked Najib, was the first to abandon Umno. Heck, the coward did not even bother to defend his post as vice-president of Umno, preferring to distance himself from the toxic party instead.
Despite his fake pledge to remain loyal to Umno for life, the disgraced Hishammuddin immediately began to apple polish then-Prime Minister Mahathir Mohamad. A close buddy of traitor Senior Minister Azmin, it would be a miracle already if Foreign Minister Hishammuddin does not entice Umno MPs to jump ship to PPBM during the current civil war within Umno.
It’s true that Umno Ministers are the real cowards who not only sabotaged their own party, but also are throwing a lifeline to Muhyiddin, the same man who had destroyed Umno in 2018. A political analyst, former Universiti Teknologi Malaysia lecturer Azmi Hassan, has a hilarious justification for Umno ministers and deputy ministers to remain in the backdoor government.
The lecturer said those Umno leaders have to stay to “prove their quality”. What type of grass did this UTM genius smoke? What happens to the “60 years of track record” mantra that Umno used to brag previously? Ministers like Khairy, Hishammuddin, “turtle egg” Ismail Sabri Yaakob, Annuar Musa and Noraini Ahmad are not greenhorns, but experienced politicians.
All the chest-thumping about how great Umno was is now being put to test. And it has failed spectacularly. Umno has bred a new crop of leaders who have no principles or ethics. All the screams to defend Malays and Islam are gimmicks meant to scam gullible Malay voters. The 60 years of corruption, abuse of power, and arrogance of power have come back to haunt Umno. Money talks, bullshit walks. – FT 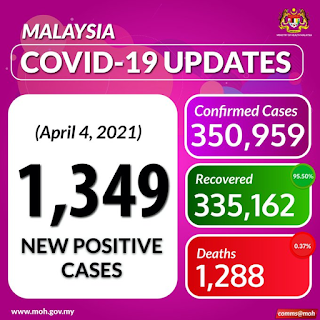