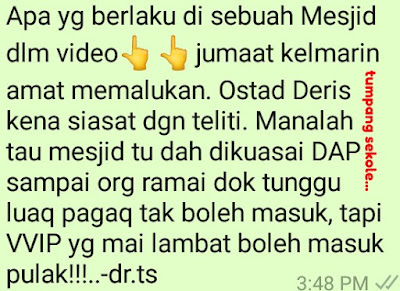 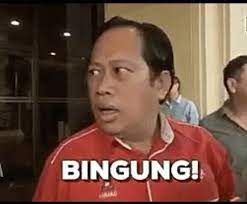 Deputy Speaker Maslan and
Economic Adviser Najib...
Until Ahmad Maslan was slapped with two charges of failing to declare RM2 million received from former Prime Minister Najib Razak and giving false statements to the Malaysian Anti-Corruption Commission (MACC), he was known as a man with many talents. One of Najib’s loudest cheerleaders, he was the biggest supporter of Goods and Services Tax (GST).
Mr Ahmad was the clown, who in his desperate attempts to convince Malaysians that Najib administration’s GST was the greatest invention since sliced bread, had posted a photo of himself cooking fried rice. He was trying to lecture university students, and the general public, to cook at home to avoid being burdened by GST. He even shared his secret recipe for fried rice using tax-free ingredients.
Of course, people were not impressed with his half-baked insulting gimmick. His daily mantra, promoting the highly unpopular new consumption tax, was so silly that even Maslan admitted himself that he was the “most hated person” in Malaysia. In response to critics who questioned his intelligence, he quickly bragged about his CGPA score of 3.85 to prove that he wasn’t stupid.
His solution for people who were struggling to make ends meet – get two jobs to solve the problem of the rising cost of living. He gave an incredible dumb example of himself having three jobs – as a Member of Parliament, Deputy Minister and UMNO information chief. In fact, the genius UMNO leader was the pioneer who started the propaganda, as early as 2013, that GST will lower prices of everything.
For two years – from 2013 till the introduction of GST in 2015 – UMNO propaganda machines had been brainwashing millions of gullible supporters that the prices of goods and services will fall. And Ahmad Maslan had even twisted and spun that the opposition rejected GST because when the prices fall, they won’t have anything else to attack the Najib government.
Maslan’s argument to scam ignorant people was quite simple – tax rate of the GST was 6%, compared to SST (Sales and Services Tax) that imposed 12%. When prices of goods suddenly skyrocketed after the implementation of the GST, which was expected, he quickly pointed the finger at the business community, accusing traders of raising prices to sabotage the country’s economy.
Of course, the Malay community, angered over rising prices of goods as a result of the GST, were ready to punish the arrogant and corrupt Najib government. In the May 2018 General Election, UMNO-led Barisan Nasional government was defeated for the first time in history since independence in 1957. Maslan was almost defeated, winning Pontian constituency with a majority of only 833 votes.
Now, even if “turtle egg” Prime Minister Ismail Sabri saw nothing wrong with Maslan’s past incompetence and stupidity, how could de-facto Prime Minister Muhyiddin Yassin accept a crook like Maslan as deputy House Speaker? Yes, it appears that former PM Muhyiddin is agreeable to the UMNO’s secretary-general’s latest nomination for the second most powerful position in Parliament. 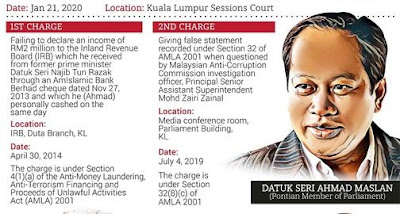 Maslan is facing charges of money laundering under Section 113(1)(a) of the Income Tax Act 1967 by not stating his real income on the RM2 million he received from Najib in the income tax return form for assessment year 2013. He personally cashed the cheque on the same day he received the money from crooked Najib Razak, believed to be proceeds of illegal activities linked to 1MDB scandal.
Hilariously, when UMNO president Ahmad Zahid Hamidi and Najib led 15 UMNO MPs to pull support for Muhyiddin, it was the same Muhyiddin, who told all and sundry that he will uphold his responsibility to not let the “kleptocrats” rule the country. When he was eventually forced to resign on August 16, Mr Muhyiddin again repeated his pledge – “I will never conspire with a kleptocratic group.”
In an emotional resignation speech, which saw Mahiaddin alias Muhyiddin almost burst into tears, the (former) prime minister claimed that he had stood by his principles and refused to give in to “kleptocrats”. He said in a live TV address that he could have taken the easy way out, but refused to compromise on the matter and interfere in the judiciary.
“Six years ago I was sacked as the deputy prime minister because I defended my principles by refusing to compromise over the 1MDB scandal. I struggled and made sacrifices, and in the end God rewarded my struggle and gave me the mandate to lead this country. But it is fated that today is my last day as prime minister, and I accept the will of God,” – claimed the drama queen Muhyiddin.
Exactly what is Muhyiddin’s definition of kleptocrats? When he blamed the kleptocratic group for plotting his downfall, he was obviously referring to Zahid and Najib, including Ahmad Maslan. So, why the so-called principled man is as quiet as a church mouse after the United Malays National Organization (UMNO) nominates crooked Maslan as the deputy Speaker to replace Azalina Othman?
Perhaps Muhyiddin was specifically referring to Najib Razak, his former boss who had sacked him for being critical during the peak of 1MDB scandal. Najib has been sentenced to 12 years in prison for abuse of power, and 10 years in jail for each of six counts of money laundering and breach of trust (CBT). Additionally, Najib was fined RM210 million, and will serve an additional 5 years if he fails to pay.
However, if Muhyiddin was only targeting those who are convicted, but not those who are facing criminal charges under the pretext of “innocent until proven guilty”, then Zahid Hamidi too should be given a position according to his seniority in the Ismail Sabri government. Muhyiddin would be seen as a “munafiq (hypocrite)” of the highest order for accepting Maslan, but not Zahid.
After all, didn’t Muhyiddin agree, or at least closed one eye, over the appointment of the notorious gangster and extremely corrupt Bung Moktar as Deputy Chief Minister of Sabah despite the fact that the former Felcra chairman Bung and wife Zizie Izette were facing charges of bribery in a RM150 million investment in Public Mutual unit trust products? 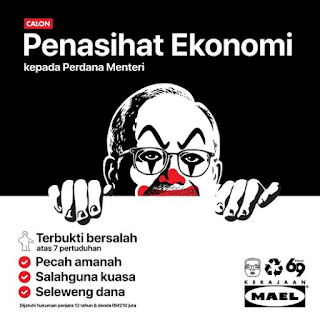 Ex-PM Najib Razak
To make matters worse, Najib Razak, arguably the world’s biggest crook, is slowly but surely making a comeback. Lame duck PM Sabri, in his attempts to please everyone, appears ready to appoint his former boss as “economic adviser”. Ismail Sabri wrote on his Facebook page that Najib was “committed to contributing his effort, time and ideas” as one team for the “Malaysian Family”.
Obviously, following an hour-long meeting with Najib at the Prime Minister Office (PMO), the clueless and incompetent prime minister was testing the water to gauge the reaction of Muhyiddin, now the biggest ally of the fragile Perikatan Nasional 2.0 regime. With his razor-thin 114 MPs in the 222-seat Parliament, by hook or by crook, Ismail is at the mercy of both Najib and Muhyiddin.
It was by design, not coincidence that Najib deliberately made public his meeting with PM Ismail, follows by Maslan’s nomination as deputy Speaker. It was a message to Muhyiddin that if he wanted to keep his lackey House Speaker Azhar Harun, then the Bersatu president has to accept Ahmad Maslan as Deputy Speaker. If Muhyiddin disagrees, UMNO will sack the despicable Harun (with help from the Opposition).
It was also a message to Muhyiddin that for the betterment of one big happy “Malaysian Family” of crooks and traitors, the ex-PM should not rock the boat. Instead, Muhyiddin, after being promoted as chairman of the National Recovery Council, should accept the idea of Najib as an economic adviser, probably with the same ministerial rank as Muhyiddin.
Yes, traitor Muhyiddin, crooked Najib and clueless Ismail are now in a Mexican standoff – a confrontation in which no solution exists that allows any party to achieve victory. Any party initiating aggression, or in this case a pull out of the government, might trigger its own demise or downfall like the collapse of Muhyiddin government, only for him to shamelessly work again with the same kleptocrats.
Nazri Aziz, another UMNO corrupt warlord, suddenly found an opportunity to return to politics after he reluctantly announced his retirement recently after betting on the wrong horse. Backing Najib as economic adviser, Nazri, who definitely would not be nominated by party chief Zahid, how hopes his act of apple-polishing would attract the attention of narcissist Najib.
If Najib succeeded in his political chess to get appointed as an economic adviser, it would mean not only Muhyiddin has lied about his refusal to work with crooks, but also a step closer to pressure the judiciary to reverse his conviction, which disqualifies Najib from contesting in the next 15th General Election. With nothing to lose, Najib is betting that Muhyiddin will not pull the trigger in the current Mexican standoff. - FT 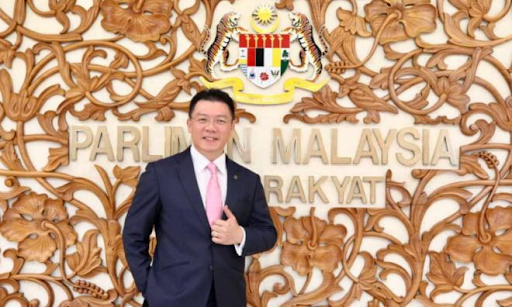 Meanwhile, Pakatan Harapan has nominated Teluk Intan MP Nga Kor Ming as its candidate for the position of Dewan Rakyat deputy speaker. When contacted, Nga (above) confirmed that he was the sole candidate named by the opposition and his nomination has been submitted to Parliament according to the Standing Orders of Dewan Rakyat.
Dewan Rakyat will hold the election of deputy speaker post next Tuesday as the government nominated Pontian MP Ahmad Maslan as its candidate for the position. In a statement today, Nga, who is also former deputy speaker, unveiled a 10-point plan for parliamentary reforms if he is given the mandate by the MPs next week.
Nga said he will advocate and work towards the 10-point plan to demonstrate the democratic spirit of Parliament if elected. He proposed for Parliament to gain financial independence, have its own parliamentary service, conduct periodic reviews of government bills, scrutinise the government’s budget and address local constituency problems.- mk
The boomerang is in session. Najib, Ahmad Zahidi, Ahmad Mazlan all set to return. The music is also being played in the Courts! Rakyat only salvation now is GE15. Wake up and march! - OrangeViper2887
No doubt one of the best candidate in PH - but in fact, any MPs in PH can easily outperform Mat Bingung. - YellowYuzu
If Nga Kor Ming gets elected by vote, PM is a gone case! It will clearly show, PM dont have the confidence of the house! - Knucklehead 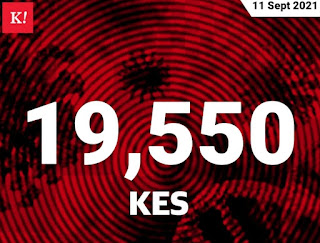