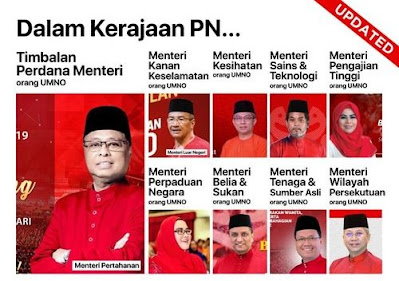 If UMNO  pulls out its support,Maeil's tenure as DPM
will be shortest in history...
Ismail Sabri is DPM - but Ismail does not have as much support in UMNO as Hishamuddin Hussein aka H2O. Although that situation can change. What is more interesting is that Ismail Sabri is no more in charge of the 'Kluster Keselamatan' (Covid 19)?
Instead H2O has been promoted to Senior Minister (Foreign Affairs) now in charge of Kluster Keselamatan, taking the job away from Ismail Sabri. What is even more significant is that H2O will also assist the PM (I think it is a takeover) in the Pelaksanaan Pelan Pemulihan Negara.
Ismail Sabri the new DPM is not in charge of either the Kluster Keselamatan nor the Pelan Pemulihan Negara. You can see clearly that although Ismail Sabri 'sudah naik pangkat' but it is H2O who now shoulders the lion's share of the responsibilities in running the government.
But the language is interesting :
1.  YAB PM telah melantik Ismail Sabri sebagai TPM
2. H2O telah dilantik sebagai Menteri Kanan
but
3.  YAB PM bersetuju supaya H2O membantu beliau dalam Pelan Pemulihan 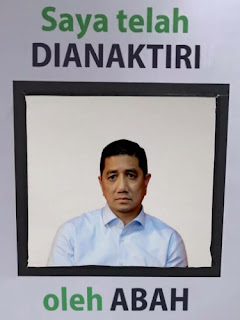 Azmin mesti frust menonggeng habis
bila dapat berita Pak Maeil jadi TPM...
Bersetuju? Bersetuju dengan siapa? Obviously the first two appointments are 'dilantik oleh YAB PM' but handing over the Pelan Pemulihan Negara is a "bersetuju" situation. Well,  it appears that there is some urgency considering the PM's health issues. Semoga kesihatan YAB Perdana Menteri akan sembuh dan pulih secepat mungkin.
I do see some inefficiencies and perhaps some trapdoors. Why not appoint H2O directly as the new DPM / Foreign Minister  with responsibility for Kluster Keselamatan as well as Pelan Pemulihan Negara?
Why make Ismail Sabri the DPM but remove him from being in charge of the Kluster Keselamatan and also not give him the responsibility for Pelan Pemulihan Negara? Will the people be impressed? Lets see what happens next. - Syed Akbar Ali
As for now Din has checkmate Zahid and Abang Non with this cunning move.By now all 38 UMNO MPs are with Bersatu except Zahid,Najib and none other the veteran Ku Li. Only time will tell... - ts
But...
Terlatest...
Resign now , Umno president Ahmad Zahid Hamidi told PM Muhyiddin Speaking in wee hours on Thursday, after chairing a virtual supreme council meeting, he announced the party’s decision to immediately cease support for PN government and call for interim pm to be appointed till GE15 - Melissa Goh 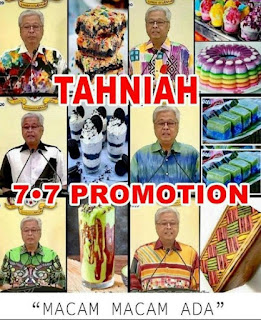 Ismail’s appointment won’t
appease Umno, says analyst...
Ismail Sabri Yaakob’s appointment as deputy prime minister will not appease Umno for long, according to an analyst who still expects Umno to quit the government.
Oh Ei Sun of the Singapore Institute of International Affairs said those who have been elected to the senior Umno leadership and its grassroots were more in favour of pulling the plug on its support for Prime Minister Muhyiddin Yassin.
He added that Ismail and Hishammuddin Hussein’s appointment probably did not get the supreme council’s blessing. “This sentiment of leaving which is very much supported by Umno grassroots will still be brewing. It’s just a matter of time, it could be tonight or in the future,” he told FMT.
Oh said Umno would never feel “all right” as long as Muhyiddin Yassin and Bersatu were at the helm, adding that party president Ahmad Zahid Hamidi still held strong support in the party and among some MPs to cause a collapse of the government. 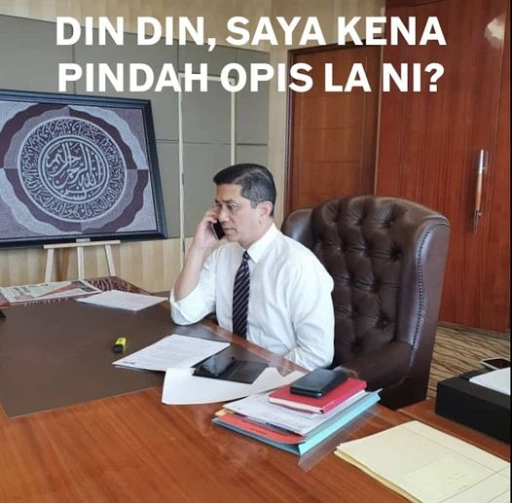 Sila keluaq ikut pintu belakang jamban ya?
Pak Maeil nak masuk...
Universiti Malaya’s Awang Azman Pawi said the question of whether Ismail and Hishammuddin’s appointments would stop Umno leaving the government depended on the supreme council, who are currently meeting virtually.
He said Ismail as deputy prime minister would affect Zahid’s position as party president as it seemed to be an attempt to stem his influence slowly and boost Ismail and Hishammuddin’s positions in the hierarchy.
“If Zahid doesn’t oppose this move he will become weaker and will be pressured into stepping down as president,” he said.
“There’s a possibility that Ismail’s appointment will be turned down because it was never discussed by the supreme council and at the Umno general assembly.” - fmt 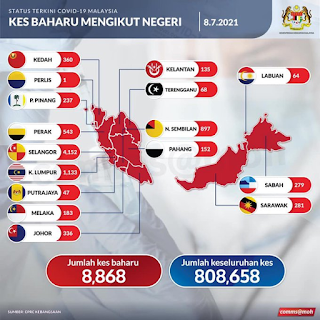