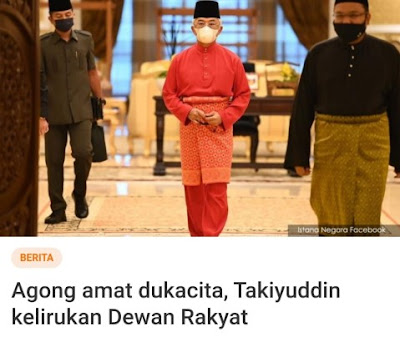 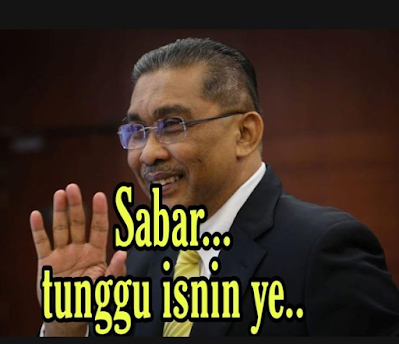 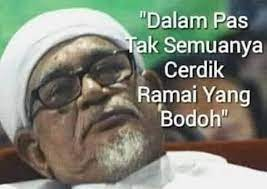 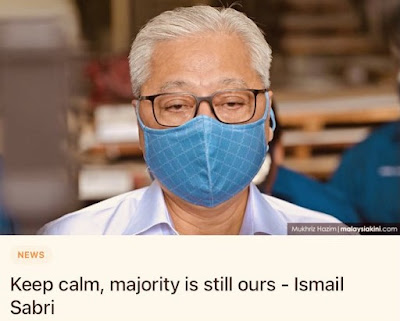 #KerajaanDerhaka trends after
royal reprimand against PN govt...
The hashtag #KerajaanDerhaka is trending on Twitter after Istana Negara reprimanded the Perikatan Nasional (PN) government for its handling of the emergency ordinances and unconstitutional conduct.
As of 6pm, almost 40,000 tweets were made using the hashtag as the public weighed into the political development that has triggered a cascade of events. The royal reprimand had sparked a flurry of meetings at Prime Minister Muhyiddin Yassin's residence in Kuala Lumpur.
In Parliament, the sitting was adjourned multiple times as it grappled with how to respond to the royal statement, which among others, criticised the government for misleading Parliament on the emergency ordinances.
Opposition leader Anwar Ibrahim also submitted a motion of no-confidence against Muhyiddin while Umno president Ahmad Zahid Hamidi called for his resignation. The government is facing accusations of treason (derhaka) for going against the Yang di-Pertuan Agong.
Istana Negara today said the Agong was deeply disappointed that the government had unilaterally revoked the emergency ordinances without his assent. He was also deeply disappointed that the government had refused to allow the emergency ordinances to be debated in line with the Federal Constitution.
The PN government is seen to be reluctant to allow any vote in Parliament amid its uncertain majority. 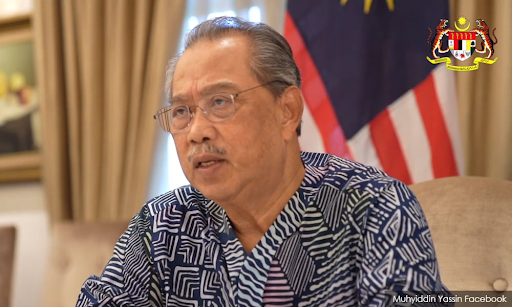 Meanwhile, Prime Minister Muhyiddin Yassin's office today defended his decision not to revoke the emergency ordinances through a vote in Parliament after Istana Negara reprimanded the Perikatan Nasional (PN) government for failing to act in line with the Federal Constitution.
The Prime Minister's Office (PMO), in a statement today, said Muhyiddin had advised the Yang di-Pertuan Agong to annul the emergency ordinances even before the special Parliament sitting convened on July 26.
The PMO added that the Agong is to act in accordance with the prime minister's advice under Article 40(1) of the Federal Constitution."The cabinet already decided to advise the Agong to revoke the emergency ordinances before the special Parliament sitting convened.
"The government is of the view that all actions taken were in line with the law and the Federal Constitution. "The prime minister emphasised that, in carrying out his duties, it is essential for him to act in accordance with the law and Federal Constitution," it said.
The PMO said it had on July 22 received the draft of the ordinance annulment which stated that all the ordinances assented by the Agong during the emergency which began on Jan 11 will be cancelled effective July 21. It explained that the prime minister then wrote to the Agong on July 23 to advise the king to annul the emergency ordinances. However, the PMO said the Agong on July 24 summoned de facto law minister Takiyuddin Hassan and Attorney-General Idrus Harun to explain the matter.
Istana Negara revealed earlier today that the ruler had asked Takiyuddin and Idrus to ensure that the emergency ordinances were revoked through a debate and subsequent vote in Parliament, something which the PN government refused to comply with. The PMO, in its statement this evening, reproduced the text of Article 40(1) which states that the ruler may request for more information but is to act on the advice of the cabinet and Article 40(1A) that states that the monarch must accept such advice. 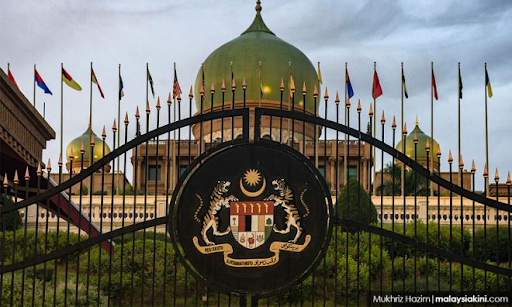 The PMO noted that this had raised questions, prompting Muhyiddin and Idrus to seek an audience with the ruler at noon on the same day. "During the audience, the prime minister again conveyed the cabinet's advice about the annulment of the emergency ordinances and clarified the confusion that the opposition tried to create during the Dewan Rakyat sitting.
"The prime minister conveyed the government's view that all of the emergency ordinances do not need to be annulled by Parliament as the cabinet had already advised the Yang di-Pertuan Agong to annul them," it said. Furthermore, the PMO said the special Parliament sitting's agenda did not include the annulment of the emergency ordinances.
Earlier today, Istana Negara in a statement said the Agong was "very disappointed" at the government's refusal to allow the emergency ordinances to be debated in accordance with Article 150(3).
The PMO maintained that it had fulfilled Article 150(3) by laying the emergency ordinances before Parliament. The article also allows Parliament to annul the emergency ordinances "if not sooner revoked".
However, Istana Negara said the government's declared revocation was never assented to by the king. It also criticised Takiyuddin for misleading Parliament. Istana Negara said that while the ruler acknowledges his constitutional obligation to act in accordance with the government's advice, it added that the ruler also has a duty to speak out if anyone had acted unconstitutionally. - mk
How can the Emergency Ordinances be revoked without the consent of the Agong and without publication of the revocation in the Gazette? The cabinet can advice the Agong but advice is not the same as consent. The government mislead the House when the Law Minister acting under the authority of cabinet announced in the House that the Ordinances had been revoked with effect from 21 July. Article 150 (3) of the Constitution is clear in that the revocation can only be done if the Ordinances are laid before Parliament, consented to by the Agong and published in the Gazette.
The PMO statement has not explained the misleading of the House by the Law Minister and the AG. If they had any dignity, the PM and cabinet would resign after the damning statement from the palace that effectively informed the nation of the rupture of the mutual trust and confidence between the Sovereign and the PM. The Speaker should also resign because he defended the Law Minister in the House on the premise that the revocation had been consented to by the Agong. The AG violated the Constitution when he disregarded the advice of the Agong who wanted the revocation of the Ordinances to be laid before Parliament and debated.
During an Emergency, executive authority is vested in the Agong and he acts on the advice of the cabinet unless otherwise stated. The Emergency Ordinance No. 1 of 2021 did not have a saving provision to the effect that Article 40 of the Constitution would continue to apply to the exercise of executive powers by the Agong during the Emergency. Even if this is disputed, the Agong cannot condone unconstitutional conduct by the government that violates the rule of law. How can a government function in a democracy by avoiding any votes in Parliament? Such an action by the executive violates the basic structure of the Constitution. - Gerard Lourdesamy 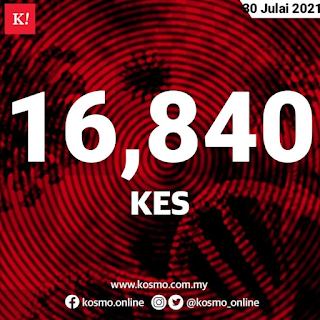