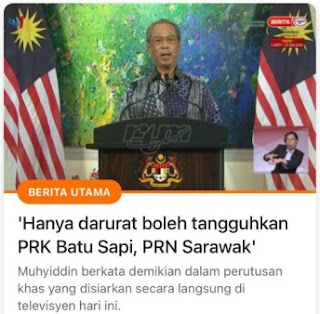 Oppose the budget Yes or No?...
Some of my constituents are asking should the opposition support the budget? The answer is both a yes, and a no.  To contain the Covid-19 pandemic situation, we have a duty to ensure that the civil service has all the financial resources it needs for 2021. But should this budget vote support from the opposition, be used to prop up this ineffective cabinet, to enable them to continue to govern us through the Covid-19 pandemic? After the Sabah election fiasco and the Emergency Move, the answer to that is a clear no.
In this posting, I will contextualize the issues regarding the budget vote and make some suggestions on how to move forward on the matter. I would suggest that the PH leadership consider using the budget vote to trade for much needed democratic reforms.
First, let us look at the political context. Not less than 3 days ago, the same prime minister had attempted to shackle Parliament with the Emergency Move. Fortunately, the rulers in their collective wisdom rejected the move and saved democracy. So isn’t it just a little bit bonkers to rush to offer a budget vote olive branch to the same prime minister immediately after his failed Emergency Move? People are rightly confused by these knee jerk reactions of politicians. Moreover, yesterday UMNO has chosen to continue to support the prime minister, therefore restoring PN’s slim majority to pass the budget. If UMNO is true to their words, PN no longer need opposition votes for the budget.
But then, Malaysian politics is full of surprises and deceits. Maybe UMNO will retract their support next week? Maybe there are many wolves in sheep’s clothing in the opposition side too? The fact of the matter is the prime minister’s tenure is extremely weakened after the royal rebuke, and those rushing to support him are finally showing their true cards. People are watching with disbelief and confusion.
Now let’s move to the legal and constitutional context of the budget vote. Parliamentary convention demands that if a government is defeated in a money bill, it has no choice but to resign. The budget vote is the mother of all money bills. If the prime minister loses this vote, he has to resign and his government will collapse. According to the current Speaker (most of us disagree with his legal interpretation), a no confidence vote can only happen in Parliament with the support of the law minister from the government! The chance of it snowing in KL is higher than getting support of the law minister to topple his own government.
So the budget vote then becomes the one and only silver bullet the opposition has to test the legitimacy of government. Therefore, we can’t simply surrender this silver bullet to the prime minister for free. Instead, we must consider using this as an all important bargaining chip, to obtain some much needed reforms to save democracy.
Now, let us consider the issue of timing. Is there sufficient time to negotiate? The budget will only be tabled on the 6th of November and the very first policy stage vote on the budget will only take place in the 23rd of November. Subsequently committee votes will take place for each and every ministry until the 10th of December. So there is ample time of more than one month, for us to make demands and for the prime minister to fulfill these demands, before the final budget vote on the 10th of December. 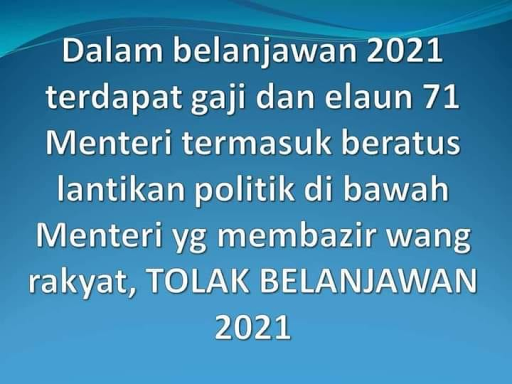 Lastly, what are the reforms that we should bargain for?
On the very top of my list of democratic reforms is to give an unfettered right to the opposition to table a vote of no confidence motion in Parliament. I am sure most reform minded UMNO MPs, like YB Tengku Razaleigh will be most supportive of such a demand. This reform will allow Parliament to check the legitimacy of the prime minister and to prevent a dictatorship.
Second is a signed undertaking by the cabinet to pass the Parliamentary Services Act in the March 2021 session to make Parliament financially and administratively independent from executive control.
There are hundreds of things that need reform, but I urge the PH leadership to start negotiating with these two basic democratic terms.
Bottomline, can we continue to trust this hapless cabinet to continue to manage the Covid-19 pandemic?  Using words such as “reconciliation”, “engagement”, “depoliticise”, means nothing if the government is not sincere about democratic reforms. And after the failed Emergency Move, the agenda for democratic reforms become even more urgent than ever.
As an opening gambit to demonstrate sincerity on the part of the government, I urge the cabinet to present a full budget briefing to all opposition MPs on the 2nd of November when Parliament resumes. After that, let the budget vote for reform negotiations start , for the sake of the people, democracy and the nation. - Wong Chen,MP Subang
Rupanya Din nak pakai  duit KWSP buat bajet 2021.
Tuu duit simpanan rakyat bukan duit mak bapak kau...
Will Budget 2021 be passed?...
Would any MP dare to not support Budget 2021? Yes, said James Chin, who is director of the Asia Institute, University of Tasmania, Australia. “An MP can vote against the budget by casting an absentee vote or by simply not being in the hall when the budget is being passed, ” he pointed out.
However, Chin is confident the budget Bill will not be defeated in Parliament. “There’s no way that (a majority of) the MPs will bring the budget down. People forget that between the first and final reading of the budget, the government can make changes to it, ” he said.
“So if there are any blocs of MPs or individual MPs who are unhappy with certain parts of the budget, the government can fine-tune it or provide an additional fund to meet the requirement of the MPs. So the budget will be passed.”
Political analyst Azmi Hassan doesn’t doubt that the budget will be passed – “Lest those who oppose the Bill are labelled as self-serving MPs who put party agenda above the rakyat’s needs, ” he said. Azmi foresees that Budget 2021 will be voted on along partisan lines. Most probably, he said, the opposition would abstain from voting as an implicit signal of no confidence in Prime Minister Tan Sri Muhyiddin Yassin.
“By convention, the opposition usually will vote against the Bill. But it is a special time so the warring parties will want to demonstrate that they have the rakyat as the priority, ” he said.
As for Umno, Azmi said the party’s statement, issued after its supreme council met on Thursday night, put to rest that some of their MPs might not support the Bill. Umno declared that it would ensure that Budget 2021 was passed.
“But on a personal note, I wish the MPs would debate the Bill’s contents and not use the time simply to show displeasure for Muhyiddin. Debate to make the Bill better for the rakyat, ” he said.
Tomorrow, Parliament convenes and Budget 2021 will be tabled on Friday. It will see debates and ministerial replies at the policy stage followed by voting by MPs on Nov 23. If a majority of MPs vote for it, it goes to the committee stage where MPs will vote on the specific measures in the budget. For the record, the government has 113 MPs and the opposition 108 MPs. There are rumblings that some government MPs could turn rogue and not support the Bill.
On Oct 28, for the third time in five days, the King advised all MPs, regardless of party lines, to stop the political squabbling and support Budget 2021 for the well-being of the people at a time when the nation is facing various crises, including the Covid-19 pandemic and economic slowdown.
However, for some politicians, politicking is like breathing. There are those who are plotting to bring down Muhyiddin’s government so that they can have their choice of prime minister or form a unity government. 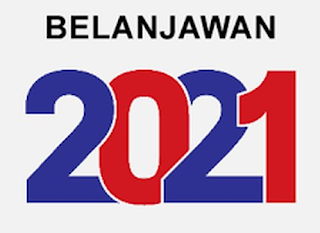 What are the consequences if Budget 2021 is not passed?
Azmi said all 2021 expenses, including the budget for civil servants’ emoluments and development, would be in limbo. The Bill, he said, no doubt would be enhanced compared to the previous Covid-19 pandemic packages.
“Without this budget, hands would be tied in confronting the effects of the pandemic, especially on our economy. This situation has never happened in our history and we will be going into uncharted territory, ” he said.
However, Azmi said he is “pretty sure our representatives will act more responsibly unlike their counterparts in the American Congress who used the (Covid-19) stimulus package as a means of political brinkmanship.”
If the budget Bill is defeated, Chin said it would be the “nuclear scenario”. The prime minister, according to Westminster convention, must resign, he said. “But remember this is not written down in law. It is a political convention. Some people say that Malaysia should not follow Westminster convention. But, generally speaking, the consensus among experts is this convention does apply to Malaysia because our Parliament is basically based on the British system, ” he said. 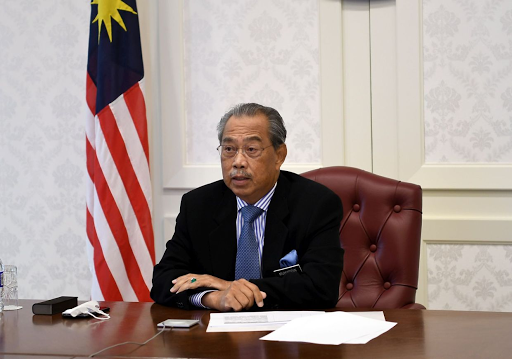 If Budget 2021 is passed, what are the political consequences?
Does it mean that Muhyiddin has “won”? Or will there be more politicking? Azmi said the opposition and Umno would want to demonstrate that their support of the Bill or that refraining from voting on it does not mean that they support the Prime Minister. This perception, he said, is critical to ensure that the legislation goes through. “I think not only Muhyiddin understands this but the rakyat too, ” he said.
Therefore, Azmi said, the political consequence would be that nothing much has changed about whether Muhyiddin has majority support. The status quo remains, with the opposition still on their quest for a new prime minister and Umno only supporting Muhyiddin till the next general election, he said.
“No doubt there will be more politicking, not immediately after the Bill is passed perhaps, but most probably after the Sabah pandemic issue is under control, ” he said. Umno, in its latest statement, has stated that GE15 should be held once the Covid-19 pandemic is under control. Passing Budget 2021 is just a ceasefire from politicking. A snap election seems inevitable.- Philips Golingai,Star 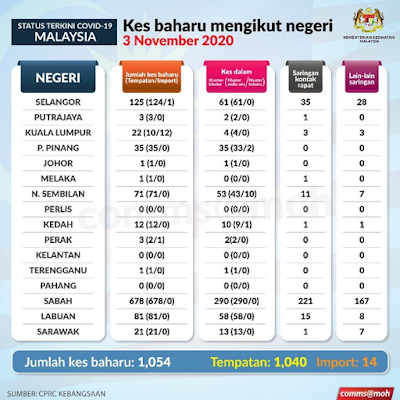 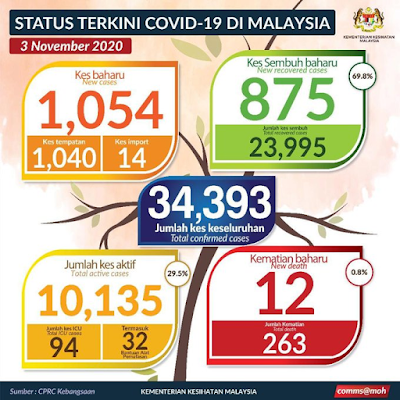