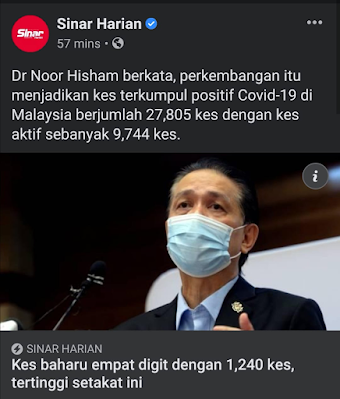 No end to political wrangling, a day after the rulers advice.All eyes on UMNO , if UMNO leave,the PN govt falls and if PM Din resigns,who’s gonna replace him? So many questions yet so few answers... 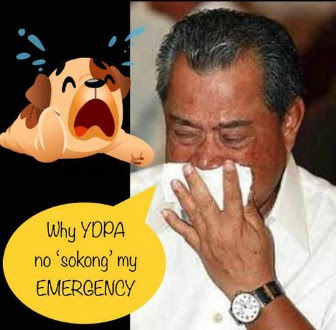 A Royal Vote Of No Confidence...
You know it was game over for Prime Minister Muhyiddin Yassin when Johor Crown Prince Tunku Ismail Sultan Ibrahim expressed his hope that Malaysia will be saved from threats of those who are greedy and power crazy for their personal interests. It was not a normal daily babbling as the remark was made on the same day eight Malay Rulers were about to convene a special meeting.
The crown prince’s father, Sultan Ibrahim of Johor, has great influence over the Malay Rulers. But on Sunday (Oct 25), there was no Conference of Rulers. Instead, it was just an informal get-together of the monarchy to discuss Muhyiddin government’s bizarre proposed declaration of Emergency. The Johor Crown Prince’s statement reflected his father’s opinion, and the result was predictable.
The Sultanate of Johor just needed to ask one simple question to fellow Malay Rulers in the meeting – why neighbouring Singapore, despite its populations of 6 times lesser than Malaysia, did not have to resort to an emergency rule, even though it has more than double of Malaysia’s Coronavirus cases?
In short, before the King Sultan Abdullah, also known as the Yang di-Pertuan Agong, announced the result of the Malay Rulers’ meeting of rejecting the backdoor PM Muhyiddin’s request for a Proclamation of Emergency, the writing was already on the wall. But the prime minister, blinded by his lust for power, was over-confident that he could arm-twist the monarch to give him his new toy.
In fact, Muhyiddin and his power-crazy gang of de-facto Deputy Prime Minister Azmin Ali and Home Minister Hamzah Zainudin were so confident of able to rule like Dictator Adolf Hitler that they had called for a meeting of all state leaders (presumably to brief them of the anticipated state of emergency), only to cancel it abruptly after the monarch denied the dubious request.
Just two days earlier on Friday (Oct 23), the disgraced Muhyiddin secretly and hastily repackaged a nuclear option – State of Emergency – but disguised as a nicely wrapped tool to fight Coronavirus. The real objective, however, was to grab absolute power and run the country without check and balance from the Legislative and Judiciary, two essential branches in democracy. 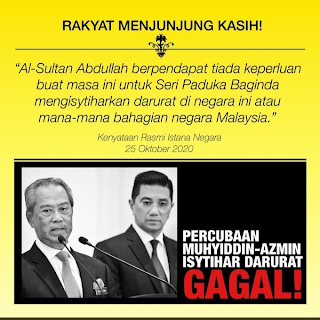 He wanted to suspend the Parliament before the Budget 2021 day, scheduled to be tabled from Nov 2-6, because he had absolutely no confidence of getting his budget passed. Hanging on a 2-seat-majority – just 113-seat in the 222-seat Parliament – the prime minister was advised that up to 90% chance he would lose the budget, and has to resign thereafter.
If the Parliament is suspended and Mr Muhyiddin is granted the emergency power, he could pass his own budget in his bed. Heck, he could even use the Emergency Ordinance under a Proclamation of Emergency to detain anybody whom he thinks is a threat to his iron throne for up to 60 days without an order of detention, and to be held up to 2 years upon a new order.
So on the same evening (Oct 23), Muhyiddin sped to meet the King with a powerful convoy of 25 high-performance cars on a 206-kilometres journey from Putrajaya to Kuantan, Pahang. The premier brought along top guns like Inspector-General of Police Abdul Hamid Bador and Armed Forces Chief General Affendi Buang – and even Health Director General Dr Noor Hisham Abdullah.
The audience with the Agong (King) was expected to produce quick and positive result on the spot, at least that was what the backdoor government thought. After all, the prime minister had brought along every single tool in his arsenal, including the kitchen sink, to hoodwink Sultan Abdullah that a declaration of emergency was absolutely necessary to combat Covid-19.
The powerful convoy arrived at the palace at 4:40pm and left at 7:10pm. To the backdoor prime minister’s shock and dismay, the Yang di-Pertuan Agong refused to grant his wish there and then. After more than 2 hours, the monarch sent the naughty boy back home – empty-handed. When it was confirmed there would be no press conference that night, it was bad news for Muhyiddin.
Still, some silly pro-Muhyiddin bloggers and propagandists managed to spin and twist that it was good news based on some photos that the convoy was served dinner by Sultan Abdullah. Even MCA propaganda news media – The Star – made U-turns in its news coverage, from “possible” state emergency, to an “expected” declaration of emergency, to “no” emergency that day. 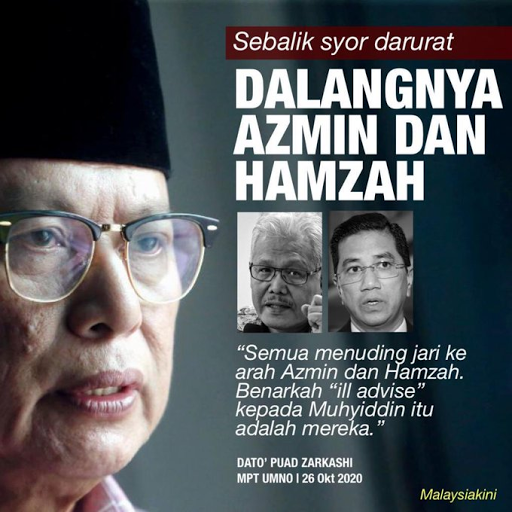 The monarch simply told Muhyiddin’s delegation that he needed to discuss with his royal brothers on Sunday (Oct 25). It was a polite way of rejecting the absurd proposal by passing the ball to the Malay Rulers to avoid dirty political blame game at a later stage. The King was not born yesterday. Muhyiddin’s real intention was so obvious that it was written all over his face.
From praising frontliners over world recognition in fighting Covid-19, to praising himself and his backdoor government for working hard in curbing the pandemic “without politicking”, how could the prime minister suddenly tell the monarch that they are loosing the battle? Exactly how could Muhyiddin say he needed a declaration of emergency now when the pandemic is under control?
More importantly, the government has not exhausted all the options to contain the pandemic that it deserves to deploy the nuclear option. That explains why King Sultan Abdullah said he felt there was no need to declare a state of emergency to help authorities fight Covid-19, arguing that Muhyiddin’s administration had so far done a good job of battling the deadly pandemic.
The royal statement was actually mocking the Muhyiddin government as well as lecturing the prime minister not to insult the monarch and people’s intelligence. Amusingly, the premier took it as a compliment at face value and expressed his thanks to the Yang di-Pertuan Agong for his confidence in the government’s ability to address the Covid-19 crisis.
Not only had been Muhyiddin politically ill-advised by his trusted lieutenants Azmin and Hamzah, he was also legally ill-advised by his handpicked Attorney General Idrus Harun. The PM thought it was a done deal because the incompetent Idrus thought the King must obediently act according to the Cabinet’s advice based on Article 40 and Article 150 of the Federal Constitution.
The clueless A.G. Idrus had no idea that there are 13 sub-articles built within Article 150 of the Federal Constitution to provide checks and balances, as lectured by former Attorney General Tommy Thomas. The Agong must satisfy that a “grave” emergency exists – whereby national security, economic life or public order is threatened – before the Article 150 can come into play. 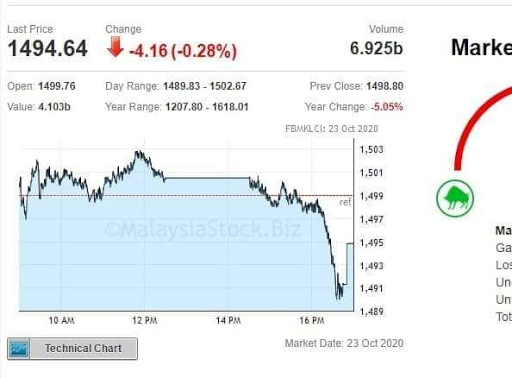 It seemed the King and the Malay Rulers fully agreed with Thomas that when it suits the Muhyiddin government, it would brag about how well they fought and controlled the Coronavirus, but when the same regime is on the brink of collapse – it would sing the apocalypse song. There was no compelling justification at all to declare a nationwide emergency.
Crucially, there were wide protests from the both sides of the political divide against giving an absolute power to the power-hungry regime. Supposedly ally UMNO lawmaker Tengku Razaleigh warned an emergency declaration may be the “final nail in the coffin” for the country’s economy, arguing he cannot see any honest basis for such a request but can only suspect non-honourable motives behind it.
Mahathir Mohamad, a twice prime minister, argued there was no justification for an emergency because there were no riots or violence, and no breakdown in law and order. Like Razaleigh, Mahathir said if Muhyiddin gets his wish, not only it cannot do more to stop the pandemic, but instead the stock market will collapse and investors will flee.
Among all, the Sultans were very worried about a collapse of business, economy, stock market and whatnot. The Malay Rulers understood very well that when things go south, which is almost a certainty, the Monarchy Institution will be blamed by 33-million angry people for recklessly and irresponsibly granting absolute power to the Perikatan Nasional regime.
The ongoing Thailand protests by young people against Prime Minister Prayut Chan-O-Cha and their own King have sent shivers down the spine of the Malay Rulers. The student-led mass demonstration had forced the Thai government, with tail between legs, revoked an earlier emergency decree. Why should the Agong protect Muhyiddin, whose request for the emergency is proof he had already lost majority support in the Parliament?
There was another perplexing problem – Muhyiddin’s gang bulldozed for the emergency powers, despite disagreement from ally UMNO. Naturally, whispers of an emergency rule had reached the King before even the prime minister’s powerful convoy started their journey. The Agong was well-prepared – Muhyiddin’s ill-conceived and evil plan was DOA (dead on arrival). - FT 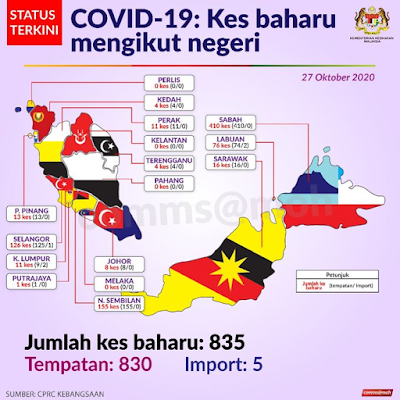 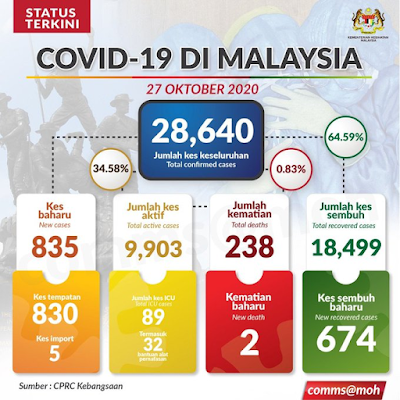