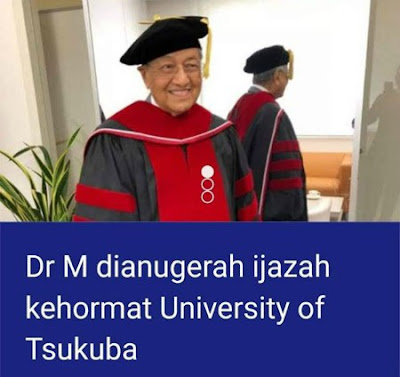 Utusan Makes A U-Turn,
Accusing Najib Of Being A Crook...

For as long as one can remember, Utusan Malaysia, the country’s oldest Malay newspaper had been an obedient propaganda machine of the Prime Minister of Malaysia, who happened to be the president of UMNO, the dominant political party calling the shot behind the Barisan Nasional coalition government. Everything turns upside-down after the May 9th general election.

Even until recently, the controversial newspaper which was founded as “Utusan Melayu” in 1939, way before the country’s independence in 1957, was protecting its biggest stakeholder UMNO (which owns 49.77%) and refused to bad-mouth its former boss – former PM Najib Razak. But after the recent Sungai Kandis, Seri Setia and Balakong by-elections, the writing is on the wall.

It’s one thing that ethnic Chinese and Indians despise the UMNO Malay nationalist party. It’s another thing altogether that ethnic Malays despise the same party which claims to represent their interest. As the mouthpiece of UMNO, Utusan played an important role as the biggest influencer in shaping the mindset of the Malay community, especially the rural or village folks.

Just one day after the 2013 general elections, in which the ruling Barisan Nasional (BN) coalition suffered its worst-ever results, Utusan published a highly racist feature article with the headline “Apa lagi Cina mahu?” (“What else do the Chinese want?”). It accused ethnic-Chinese of trying to overthrow the Malay-dominated government – calling them “ungrateful”.

Make no mistake about it. In spite of their financial meltdown due to the collapse of paymaster UMNO, Utusan has chosen to continue spewing extreme, racist and hatred news against the new Pakatan Harapan government, while sing songs of praise for UMNO. Its circulation of 112,050 copies during the period of July – Dec 2017 continued to shape the bigoted thinking of conservative Malays.

Utusan’s stock is today worth only RM0.125, a plunge of 40% since the last time we wrote about it 3 months ago in August, when it was trading at RM0.21 a share. The news media has offered Voluntary Separation Scheme (VSS) to 800 of its 1,500 employees in September, attracting insults that its owner – UMNO – could not even protect its Malay employees despite championing the cause of the race. 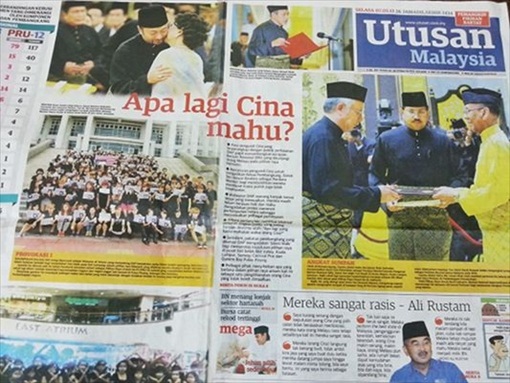 Surprisingly, over the weekend, the same news media which had been supporting the scandal-plagued Najib Razak made an unbelievable decision. The UMNO mouthpiece decided that enough is enough as it could not stomach any of the crook’s cock and bull story. Yes, when even Najib’s biggest propaganda machine finds it hard to twist and spin his stories anymore, the ex-premier is in deep trouble.

Utusan has demanded Najib to apologise to all UMNO members with regards to the money found in his personal bank account. It said – “Najib’s revelation that he does not know the real source of the money deposited into his account has made Malaysians, especially UMNO members, feel cheated as they had accepted his claim that the money was a donation from the Saudi Arabia government.”

People read in disbelief when the news media boldly attacked Najib – “Finally, his (Najib’s) lies all this while was exposed during his interview with Mary Ann Jolley in an interview with Al Jazeera recently. Najib must apologise to all UMNO members for this lie which caused the people to lose confidence in the BN leadership, resulting its component parties losing power.”

The notorious editorial, using the same pen name “Awang Selamat” to stir up racial and religion sentiments previously, said it made no sense that Najib was unaware of where such a huge sum of money is from. It wrote – “What makes less sense was Najib did not take the initiative to thank the Saudi Arabia government or the King, if the money was indeed from them.”

The best part was when the editorial wrote – “Awang is reminded of an old story which said that not all thieves are liars, but all liars will always steal.” That statement alone speaks volumes that Utusan can actually become a responsible news media if it chooses to. Unfortunately, it’s too little too late for the media. It should apologise to all Malaysians for playing dirty propaganda on behalf of UMNO.

Effectively, Najib Razak can kiss his future goodbye, if he still thinks he could make a political comeback after serving his jail time. His last chunk of support remained with Utusan readers, who amazingly refused to believe he had stolen any money. Now that Utusan is telling its readers that Najib was a crook after all, the gullible Najib supporters would be fabulously heart-broken.

Still, Utusan’s telling Najib to fly kite doesn’t mean the news media has finally regretted and repented over its past sins of promoting hatred among the multiracial and multi-religious community in the country. After the visiting Saudi Foreign Minister Adel Ahmed Al-Jubeir declared that the RM2.6 billion donation had nothing to do with the kingdom, all hell breaks loose in Najib’s camp.

The U-turn made by Najib during an hour-grilling with Al-Jazeera’s reporter Mary Ann Jolley in an exclusive interview on Oct 26 was the last nail confirming the ex-prime minister was both a crook and a serial liar. His back-pedalling, that he actually did not verify the source of the RM2.6 billion or who owns the funds but merely based on “assumption”, was indefensible even by Utusan’s standard.

So, Utusan, most likely having secured endorsement and approval from UMNO leadership, decided to throw Najib under the bus. It wasn’t a coincidence that a day after UMNO Deputy President Mohamad Hasan said it was “unfair, unreasonable and illogical” for anyone to continue blaming UMNO for 1MDB scandal, Utusan conveniently ran an article whacking Najib until the kingdom comes.

Heck, UMNO was so pathetically panicked and disarray that the UMNO No. 2 was reduced to begging for continuous support, saying – “To the Malays, UMNO does not ask for much. Just act rationally and fairly. Give space for this charity movement to continue its journey and its contribution to the race, religion and country.”

Of course, Mr. Hasan was just shedding crocodile tears. None of UMNO warlords cared about the 33-million people when they happily pocketed RM400 million stolen from 1MDB funds. And they hadn’t lifted a finger when the disgraced Najib forced the GST into peoples’ throat. Until today, UMNO has not openly condemned Najib’s thievery. Instead, they used Utusan to wash their hands off the 1MDB scandal. - FT