"It was as an inducement for Rosmah to help the company (Jepak Holdings) to secure the Hybrid Photovoltaic Solar System Integrated Project and Maintenance and Operation of Genset/Diesel for 369 rural schools in Sarawak, worth RM1.25 billion through direct negotiation from the Education Ministry."
Story kat SINI SINI dan SINI

After Malaysia’s 14th general election on May 9, 2018, the joke at coffee shops has been that the easiest way to spot and catch a corrupt politician from the previous Barisan Nasional government is to look at how fat they are. Their level of obesity is the measurement of how much the corrupt officials had stolen and plundered the national treasure.

Still, one indisputable warlord stands out as proud as a peacock – Tengku Adnan Tengku Mansor. Like self-proclaimed Bugis warrior Najib Razak and Java-migrant Zahid Hamidi, the fake “Tengku” Adnan had proudly proclaimed himself an Aceh warrior. Hmm, does that qualify most of the crooked UMNO leaders as Indonesian immigrants?

Yes, not only Mr. Adnan is the UMNO warlord with two “Tengku” to his name (a title even his colleagues in UMNO laughed at), he also claimed that it was his ancestors who brought Islam to Malaysia. Like his boss Najib, Adnan shamelessly told all and sundry that he possessed the same fighting spirit blood of an Aceh warrior who bravely fought the Dutch hundreds of years ago.

However, Mr. Adnan is now in deep trouble after being arrested by the Malaysian Anti-Corruption Commission (MACC) today. He needs more than Aceh warrior blood to prove his innocence over dubious land deals involving Kuala Lumpur City Hall (DBKL). He is to be charged tomorrow (Nov 15) for his involvement in the 97 land deals worth RM5.63 billion – covering 273.27-ha (675.27 acres) of DBKL land.

Formerly Federal Territories Minister, Mr. Adnan will be jointly charged with his partner-in-crime – real estate developer Tan Eng Boon, the chairman of ceramic products company Goh Ban Huat Bhd (GBH). Prior to his arrest today, Adnan had admitted to being called in by MACC at least 12 times, and grilled over the 97 doubtful transactions during his tenure as the minister. 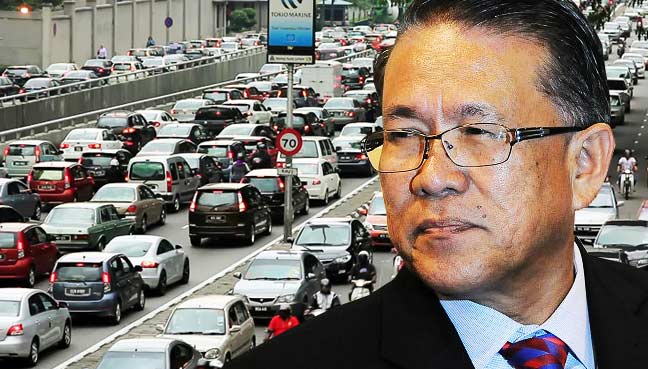 Interestingly, the fishy deals were only exposed after the collapse of Barisan Nasional government, suggesting that the land deals were deliberately hidden. Apparently the land purchases took place with the former Kuala Lumpur Mayor (presumably the corrupt Mohd Amin Nordin Abd Aziz whose service ended on Sept 30) listed as the buyer.

Upon the purchase, the ownership of the lands was transferred to Yayasan Wilayah Persekutuan, a foundation chaired by the scumbag Tengku Adnan. Under the pretense of the purchases made by the DBKL mayor, the plots of premium lands were subsequently sold to developers (Tan Eng Boon being one of them) at a price significantly lower than the market value.

In September, the new Federal Territories Ministry has cleared 43 of the 97 questionable land deals reported to the MACC. So far, 14 deals have been terminated while another 15 were renegotiated. Still, with dozens of dubious land deals on the table, Mr. Adnan may break the record of being slapped with the most number of charges tomorrow – more than Zahid’s 45 charges.

The hanky-panky business deals allegedly had been going on since 2013, the same year Tengku Adnan was appointed by then-PM Najib Razak as the Federal Territories Minister, until the downfall of Barisan Nasional government this year. Mr. Adnan has since claimed that he had handed over land matters to the Prime Minister’s Department, hence he was innocent.

But if Mr. Adnan is innocent, then Paris Hilton and Rosmah Mansor must be a virgin. His “Tengku” title isn’t the only thing he has been faking. A well-known fear monger, he was the same irresponsible UMNO racist who had spread fake news that Christians were using churches to spread lies against the then-Najib government – just before the Barisan Nasional downfall.

Last year, the gluttonous Adnan proudly tweeted a Guinness World Records certificate recognising the achievement of what was supposed to be the “world largest gathering of chefs”. Turns out, the certificate was a fake one. Not only did Adnan fake the certificate, it was also tainted with multiple spelling errors – “achived” when it should be achieved and “Guiness” instead of Guinness. 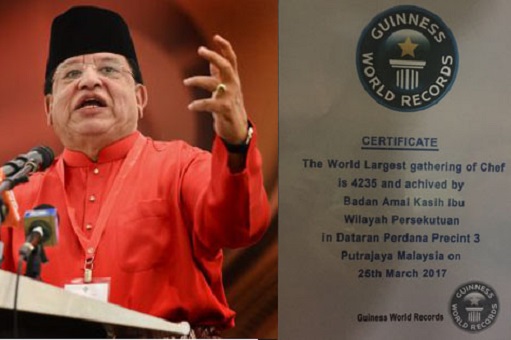 Notorious for his moronic statements, Adnan infamously mocked and insulted the women in 2007 when he said – “All bloggers are liars, they cheat people using all kinds of methods. From my understanding, out of 10,000 unemployed bloggers, 8,000 are women.” A year later, under the clueless Abdullah Badawi leadership, the arrogant Barisan Nasional lost its two-thirds supermajority in the Parliament.

Adnan, arguably the most corrupt Federal Territories Minister during the previous administration, has a laughable excuse not to declare his assets. He argued that he will not declare his assets to the public due to fears he and his family will be targeted by criminals, the clearest sign that he possesses astronomical unexplainable wealth.

Days before the polling day on May 9th, Adnan went ballistic after Mahathir Mohamad revealed the Federal Territories Minister was a thief and had amassed huge number of contracts. In his attempt to whitewash the corruption allegation against him, the crooked Adnan claimed he had been declared as one of the richest people in Malaysia in 1992.

Adnan was also the same guy, as revealed by a Royal Commission of Inquiry, who fixed the appointment of judges after his role in conspiring with Lingam was exposed. Amusingly, the dumb Tengku Adnan screwed up while urging students to appreciate Najib government, when he cited that even “slow learners” had a place to pursue their studies at UiTM.

Of course, Adnan was a strong supporter of Najib Razak. To prove that he was the best lootlicker money can buy, he had claimed 1MDB issue was solved and it was merely a perception that the opposition (now government) had created. Do you know that Tengku Adnan and Najib Razak are neighbours? Perhaps fate will put both individuals next to each other in the Sungai Buloh Prison soon. - FT