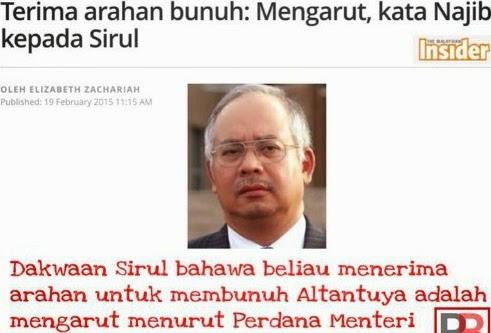 
Gobind: Has PM checkmated himself...

This is the question posed by DAP lawmaker Gobind Singh Deo in response to the prime minister dismissing the former police commando's claim of acting under orders as such.

"How does he know this? This pins him down to that question.

"If Sirul's claim isn't true, then what is? Najib may have just check-mated himself with that answer," he said. - mk

Shylock, o Shylock!...
Shylock may be a fictional character in one of Shakespeare’s sixteenth century play, but the same despicable character, whose vengeful acts finally led to his own downfall, is ‘on stage’ time and again in modern history.


To refresh our memory, ‘The Merchant of Venice’ was about Antonio, a merchant, who had to borrow money from this Venetian moneylender, Shylock. When Antonio defaulted on his loans, his life was literally at the mercy of Shylock, who then demanded the pound of Antonio’s flesh as revenge.

Antonio had given Shylock this surety at a pound of his own flesh from next to his heart, something which Shylock was all game for, the moment Antonio was brought before the judge and the court ruled in favour of Shylock, and gave the mean Shylock his wish.

However, a young and intelligent Portia finally came to the rescue of poor Antonio from Shylock’s knife.

With a sharp legal mind, she told Shylock that he must cut precisely one pound of flesh, no more, no less; hence, came forth these famous words of hers: “So take your penalty of a pound of flesh, but if you shed one drop of blood when you cut it, the state of Venice shall confiscate your land and property.”

Although I have read the ‘Merchant of Venice’ as a schoolboy, the play is still vivid on my mind. Sometimes, I have the tendency to draw similarities between Shakespeare’s characters to modern-day ‘real life’ stage actors.

For example, after the apex court had sentenced former deputy prime minister Anwar Ibrahim to five years’ jail, I find it amusing that even though Anwar is now physically in prison, there are people who would still go all out to carry out character assassination against him.

It is like the Malay proverbial saying, ‘Sudah jatuh, ditimpa tangga pula’ (Having fallen off the ladder he is crushed by it). Anwar, who claimed that his jailing was the result of a political conspiracy, is now being further ‘crushed’ by his political foes; and I pray that he will remain strong to fight the injustice.

The Shylock’s character sprang to life again, when I watched ‘hired’ deputy public prosecutor, Muhammad Shafee Abdullah on video verbally attacking Anwar, although the latter has no way to defend himself. This, in my opinion, is simply unacceptable watching it as a fellow Malaysian.

If such things are allowed to go on, Umno cannot blame others when the moral values of the younger generation of Malaysians are eroded when the prosecutor-for-hire himself, who is often linked to Umno, described in detail during an Umno meeting what Anwar’s accuser, Mohd Saiful Bukhari Azlan had said.

As pointed out by one particular Malaysiakini reader, for someone of sound mind, such descriptions should “normally be confined to the privacy of our own homes, whether fabricated or true.”

In the first place, the ‘in camera’ account was only meant for the courts and for Shafee to now reveal it clearly shows his own lack of professionalism as a lawyer. Let us see what happens after this, especially since Shafee has revealed some lurid details that were not supposed to be revealed in public.

I wonder if this is not contempt of court, since the witness’ own testimony was never meant to be revealed in public!

It also taints the good name of the Attorney-General’s Office. Shafee appears to be going on an ego-trip now.

Even former attorney-general Abu Talib Othman (left) said that Shafee appears to be good at ‘advertising' himself, despite the Bar Council prohibiting its members from advertising themselves.

Urging for debate, no more backstabbing

In my humble opinion, Shafee has carried out the most bizarre attack on Anwar that, even an ordinary street Joe like me finds it hard to understand why Shafee had done so at a politically charged meeting.

I can only think of two reasons. Could it be a personal vendetta against Anwar, or was it to just kill him off politically that jailing him was not enough and now Shafee and Umno have to go on a roadshow to carry out what I see as merely character assassination, with Anwar unable to defend himself?

Umno Youth chief, Khairy Jamaluddin should join force with Shafee to enter into a ‘live’ telecast debate with those claiming Anwar is a prisoner of conscience, so that both sides could present their case instead of going on a personal attack against Anwar.

The DPP has no business going around to speak to a political party unless he, too, has political motive. Isn’t the DPP supposed to remain neutral and carry out his task as a public servant? Even if he was invited to give a talk, should he not stick to the facts and refrain himself from revealing things that were not meant to be told in public?

Now, like it or not, Shafee’s actions have also reinforced the impression that Sodomy II was a conspiracy to finish Anwar off politically, after Sodomy I failed.

What the world thinks matters

This is, in fact, the impression that many have chosen to voice out. When Anwar was sentenced to five years jail, news flashed across the globe, mostly critical of the apex court’s decision as well as the government’s involvement.

Both political leaders and non-governmental organisations have issued press statements that had expressed concern about the jail sentence. Eyebrows were raised at the lightning speed that the otherwise elegantly silent Prime Minister’s Office issued a press statement, less than 20 minutes after the judgment was read out.

An open petition created by former ambassador to Malaysia, John Malott (right) has already drawn over 52,000 signatures within just one week, urging the US Government to secure the release of Anwar Ibrahim, whom Malott describes as a “political prisoner”. It is the trying to hit 100,000 by March 12, in order to capture President Barack Obama’s attention.

We are like a stage. What someone like Shafee has done is not good for the nation, because the world is watching as the drama continues. If someone like me could immediately think of Shylock in ‘The Merchant of Venice’ as Shafee’s role, I wonder what others would think of him.- mk 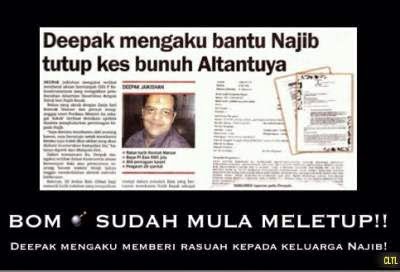 Too Much Partying By Najib’s PR Guru Paul Stadlen...