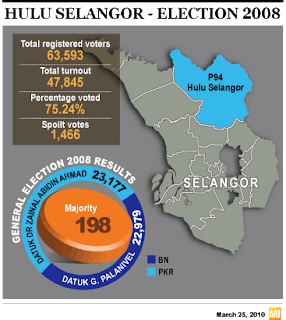 A five percent voter swing is expected at the Hulu Selangor by-election as BN has been gaining political mileage in the area, said a local MIC source.

"Palanivel has been working very hard to secure the area for almost six months now," said the source.

According to him, Palanivel - who held the seat for two team - has programmes and activities every two weeks in remote locations of Hulu Selangor, including the former colonial town of Kuala Kubu Bharu. However, if BN decides not to cast candidates who had formerly lost their seats, it could go to a younger candidate within MIC, he projected.

Hulu Selangor is a semi-urban mixed seat of 63,539 voters of whom 53.9 percent are Malay, Chinese (26.7 percent) and Indians (19 precent). BN has a good chance of winning back the seat as it won all three state seats under the Hulu Selangor constituencies in 2008 - Kuala Kubu Bharu (MCA), Batang Kali (Umno) and Hulu Bernam (Umno).

Evasive on the chances for an Umno candidate to be fielded as Prime Minister Najib Abdul Razak only recently had promised to dedicate RM15 million for public flats repair works in the constituency, the source stressed that the Indian vote was the trump card.

"If it's not Palanivel (right), there is a likelihood that (MIC) information chief P Kamalanathan to be next best option," he said.The Indian minority in the area has been rather dissatisfied with the Pakatan government, said the source, dismissing speculation that PKR could retain its seat.

Zainal Abidin formerly held the Dusun Tua state seat, under the Hulu Langat parliamentary constituency, on the Barisan Nasional ticket three consecutive times - in 1990, 1995 and 1999. He had been Cheras Umno chief and had also headed Hulu Langat Umno for several terms.

Zainal Abidin joined PKR in 2005 after a fray with Umno.

This will be the country's 10th by-election since the 2008 general elections.

PKR got to work extremely hard if it wants to retain Hulu Selangor. A traditional UMNO stronghold,but the seat was given to MIC during the past elections. PKR victory in 2008 was a wafer thin 198 vote's margin. In fact the spoilt votes exceeded the majority obtained by 9 to 1. Gues the spoilt were from UMNO hardcore members who refused to either vote the BN or PKR candidate.

However, with the strong support of the rakyat and fellow Pakatan leaders, hopefully PKR will be victorious.