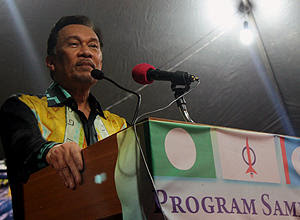 The more the powers-that-be appear to harass him, the bigger the crowds that come to hear his version of political reality. Clearly, pressure on their man whets his supporters' appetite for what may well be dubbed the 'Anwar Ibrahim 360' show: the PKR supremo's overall take, delivered in windmill fashion, on what is happening to the politics, economy, religion, and people of Malaysia.

On Tuesday night, a crowd of about 10,000 had braved pouring rain in Rasah, Negri Sembilan, to hear Anwar and DAP's Lim Kit Siang lambast the Umno-led BN for its high-intensity campaign to induce defections from Pakatan Rakyat's ranks and for alleged unleashing the police force and the anti-corruption body, MACC, against the opposition's elected representatives.

Earlier in the week, police had dispersed a crowd at the Sultan Sulaiman Club in Kampong Baru, Kuala Lumpur. The crowd gathered to celebrate the second anniversary of the political tsunami that had gained for the opposition control of four states and enhanced standing in one.

There followed a gathering at an indoor stadium in Shah Alam which also drew sizeable support but the exhibition of popular sentiment at Rasah, in inclement conditions, was the surest indicator that Pakatan's taking public their case against undue BN harassment was catching on compellingly. The 20,000 crowd that turned up at the Tapak Expo in Seberang Jaya last night waited patiently until 11pm for Anwar to appear.

Earlier it had listened with applause, polite and intermittent, to supporting speakers, which included PAS president Abdul Hadi Awang, Penang deputy chief ministers P Ramasamy and Mansor Othman, Chief Minister Lim Guan Eng and Karpal Singh. Abdul Hadi's disclosure that a motor accident causing the deaths of some ardent supporters back home in Marang, Terengganu, explained his hastened turn at the lectern which he used to moving effect by saying that Anwar's caliber and present privations made it imperative that Pakatan continue to support him for the role of parliamentary opposition leader.

Justification for that position is tenuous now that defections have dropped Anwar's party, PKR, to second place in the tally of opposition MPs. The post normally goes to the leader of the party with the highest number of seats. 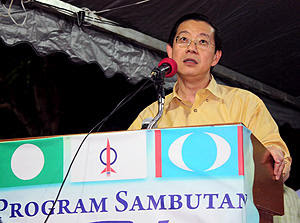 At last night's gathering, the fact that a shower had cooled the heat of the earlier part of the evening helped reduce the people's discomfort at standing for long among concretions of parked cars, motorcycles and human beings. There was relief when the main attraction appeared about 15 minutes later than he usually does – 10.45pm is Anwar's usual turn at the lectern. He had rushed to the place after addressing a gathering at Sungai Chenaam in Nibong Tebal. The crowd at this Malay hamlet, composed mainly of fishermen and farmers, was about 5,000.

Lim Guan Eng, who had preceded him at Sungai Chenaam and exited earlier to warm-up the crowd at Seberang Jaya, was speaking when Anwar arrived, pausing to allow the emcee to hail the PKR leader as 'wira negara' (nation's hero). Anwar spoke after DAP's wheelchair-bound chairman Karpal had done his rousing little bit to assure the people that his lack of locomotion was no impediment to his fervour in legal espousal of Anwar and determination to see Pakatan emplaced in Putrajaya.

Anwar's now much-delayed turn at the podium meant he had to race through his speech, but not at the expense of his singular ability at mixing high flown speculation with street vernacular. This saw him quote the Malay thinker Za'aba, fetching a counsel of this reformist intellectual uttered in 1920 no less, and dovetailing it with the necessity for imperative reform to Malaysia's political culture.

Anwar's ability to mix high and low on issues to do with religion and secular concerns, culture and politics, and also of his interactions with foreign and domestic leaders, was all on evidence in a fast-paced speech of about 45 minutes' duration. He made it all sound he had a good grasp of the whole diorama of Malaysian history and that his lyrical grace under repressive pressure – he said the cops were waiting to question him on the morrow - was a thing the people could always count on. 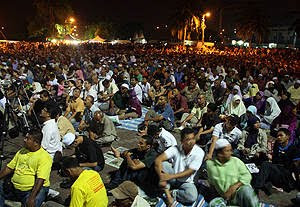 That appeared to be what the crowd wanted to see from him, for many did not wait until the end to depart. Having cooled their heels until his late arrival and been sufficiently gratified, they, near to midnight, began to straggle out of the sprawling grounds only to find people leaning on the guard rails in the distant periphery, still intent on the speaker's content, audible through strategically dispersed speakers.

The lure of Anwar's rhetorical magic is a thing of surprise, even to frequent listeners. -terence netto

The use of the police, judiciary, MACC and the rest of the civil service to harass PRR will only add more nails into UMNO's coffin........