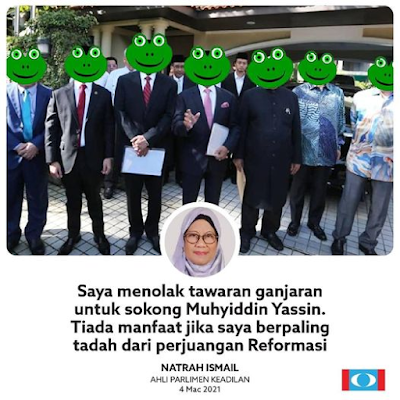 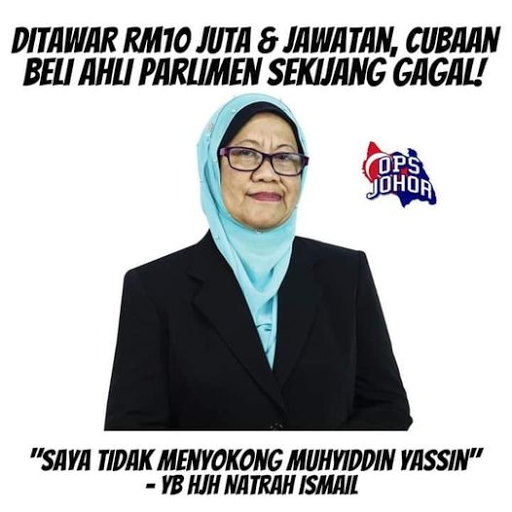 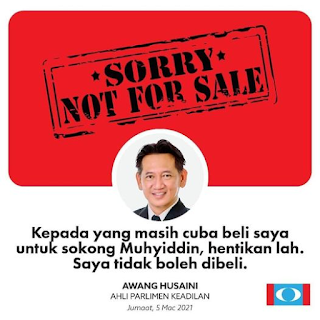 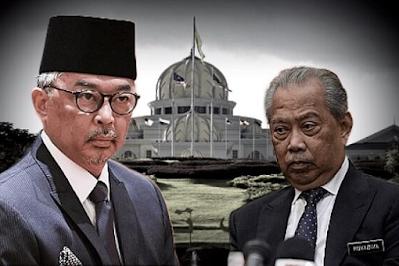 Muhyiddin vs Agong - Takiyuddin Rejects
Royal Decree For Parliament Session...
De facto Law Minister Takiyuddin Hassan appears to have committed sedition with his latest remarks. If it were the opposition lawmakers who said what he had said today, you can bet your last penny that thousands of police reports would be lodged for sedition. Days after the King said Parliament can convene during the current State of Emergency, Takiyuddin has shot down the monarch’s decree.
Stunningly, Takiyuddin now rudely said the Cabinet has advised the Yang di-Pertuan Agong (King) that the Parliament sitting will not be held during the Emergency until August 1. He argued today (March 3) that the statement made by the Palace last week (February 24) was to explain that there will be no Parliament sitting, and any decision to do otherwise must be made by the Cabinet.
Not only the MP from PAS Islamist party tried to insult the people’s intelligence, but also has delivered a slap in the face of King Sultan Abdullah. If the real intention of the Palace was to tell all and sundry that Parliament will remain closed, exactly why did the monarch have to foolishly waste time explaining that despite the emergency rule, Parliament session can be reconvened?
Would it not be wise for the King to just say he has no power to say when the Parliament institution can be “unlocked” because the only man who can decide is Prime Minister Muhyiddin Yassin – the most powerful man in the country, even more powerful than the King and nine Malay Rulers in Malaysia? Heck, better still, the King should just keep his mouth shut.
That’s right, if the plan is to maintain the status quo, as suggested by the genius Takiyuddin, the Palace did not have to make any announcement or clarification in the first place on Feb 24. Imagine a restaurant is ordered to be closed by the prime minister, but the King suddenly said the restaurant’s food stalls can still sell “Wonton Noodle”, only to be told by the PM’s minions that no food can be sold.
The burning question is, why did Agong mention the magic words – “Parliament sessions can be held” – if indeed there was no intention whatsoever by the backdoor Perikatan Nasional government to conduct any meetings at all? One explanation is that the King has finally woken up and realized the mistake he had made in agreeing to the request for an Emergency Proclamation.
Therefore, the King expressed his displeasure for being ill-advised, to put it mildly, and wanted the democracy to be restored. He was also not impressed with the public perception that the monarch had been scammed or hoodwinked. The stubborn high number of Covid-19 new cases, despite MCO lockdown and Parliament shutdown from Jan 12 to Feb 24 did not help the situation either. 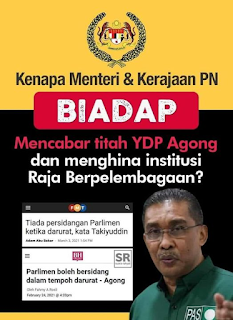 Takiyuddin Hassan - PAS Secretary-General
The prime minister reluctantly agreed to reconvene the Parliament, which was shut down to enable him to cling to power and had nothing to do with fighting Coronavirus pandemic. But the regime did not expect the Palace to pre-emptively make a public announcement suggesting that Parliament sessions can and will be held very soon, even during the State of Emergency.
Another explanation is that between February 24 and March 3, a substantial number of lawmakers aligned to PM Muhyiddin have agreed to betray him when the Parliament is reopened for business. And the premier has received the tips just in time to instruct Takiyuddin to make the spectacular announcement today to reverse the monarch’s decree.
The day the prime minister shamefully suspended the Parliament on Jan 12 was also the same day UMNO MP Nazri Aziz withdrew his support, reducing Muhyiddin with only 109 seats in the 222-seat Parliament, of which two seats are currently vacant. That means the PM no longer had the majority to pass legislation without obtaining support from the Opposition.
However, the premier has regained his simple majority 3 days ago when two opposition lawmakers – Larry Sng Wei Shien and Steven Choong Shiau Yoon – were reportedly bribed with tens of millions of Ringgit to leave Parti Keadilan Rakyat (PKR) and pledged support for the illegitimate backdoor government. But even with 111 MPs, it is too close for comfort.
Fierce critics like former PM Najib Razak, UMNO president Zahid Hamidi and MP Ahmad Maslan are waiting for the strategic moment to withdraw their support for the prime minister. It’s everyone’s guess how many lawmakers among Najib and Zahid’s circles would follow suit once an order is given to cross the Rubicon – a point of no return.
Coincidentally, on Feb 26, just two days after the King gave hope that the Parliament would be reopened soon, UMNO sent a letter to the prime minister. Apparently, the premier was informed that as a result of UMNO Supreme Council’s meeting, UMNO would only work with the government until Parliament is dissolved, hence would not cooperate with Muhyiddin’s party PPBM in the next general election. 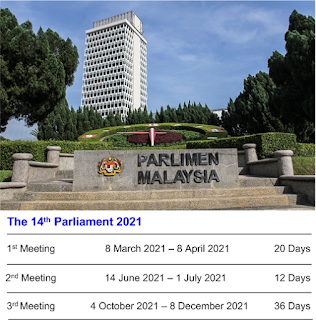 Malaysia 14th Parliament Session Dates and Timetable 2021
To justify the government’s refusal to reopen the Parliament, contrary to the King’s decree, Mr Takiyuddin comically said there was no need for Parliament to meet because the King is able to enact laws through the Emergency Ordinance. Again, if it’s true that Sultan Abdullah was interested to create laws in such undemocratic manner, why did he recklessly say Parliament meetings can be held?
But the biggest joke was when the PAS warlord claimed the decision not to convene the Parliament sitting was made based on science and data. Takiyuddin argued that Members of Parliament are at risk of becoming infected with Covid-19, based on their age – 77 MPs are aged between 61 and 69, while another 19 MPs are between 70 and 79 of age, as well as 4 MPs who are aged 80 and above.
Did not Malaysia just receive two batches of Pfizer-BioNTech vaccine already – first batch of 312,390 doses on Feb 21 and a second batch of 182,520 doses on Feb 23? The country also has received 300,000 doses of Sinovac vaccine on Feb 27. Does the brilliant government need a rocket scientist to tell them how to vaccinate the 220 MPs with the vaccine before reopen the Parliament?
Even before any of the vaccines were invented last year, not a single MP was infected during the 55 days of Parliament sessions. If SOPs (standard operating procedures) was what it took to effectively prevent infections last year, what are the chances of getting infected now that Pfizer-BioNTech and Sinovac vaccines are already secured in the backyard?
With the lifting of MCO (movement control order) lockdown effective this Friday (March 5), the worst is over under the “excellent leadership” of Muhyiddin Yassin. It’s both amusing and jaw-dropping  that when casinos, 4D and jackpot shops, cinemas, schools and even spas and reflexology as well as pedicure and manicure centres are allowed to reopen, Parliament remains closed indefinitely.
Besides admitting its own illegitimacy, it seems the backdoor government is shooting its own foot with its latest dramatic twists and spins. Foreign investors and powers would be left wondering why the Parliament of Malaysia appears to be haunted and dangerous, so much so that it must be blacklisted as if it attracts special attention of Coronavirus.
In fact, the government is considering the idea of reopening the country to foreign business travellers. Are Malaysian MPs more dangerous than foreigners, who might bring along more infectious variants of Covid-19? The backdoor government is running out of excuses to continue lock down Parliament. And in the process contradicts and disrespects the King, making him look like a clueless fool. - FT 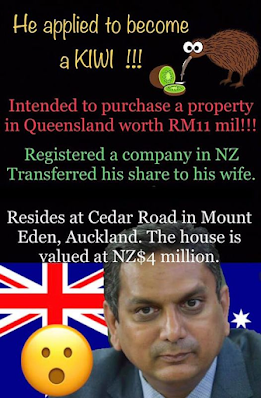 New Zealand is his 1st home..
Segamat is f**k all shit...
Santhara has more than just kin in NZ, even applied for PR, govt docs show...
1. Santhara and his wife had initially planned to purchase a house and sought to emigrate there some time before 2011
2. Santhara intended to purchase property in “sensitive land” at Lakes Hayes, Queenstown, as a lifestyle block for NZ$3.8 million (RM11.1 million today).
3. New Zealand’s Companies Register found that V3S Trustee Ltd was incorporated on September 27, 2019, with Santhara and his wife at the helm as directors. They held a 20% and 80% stake, respectively.
4. Santhara subsequently disposed of his shares and position in the company to D’Cruz on October 2, 2019, giving her full ownership of the firm.
5. The company filings also records that the couple currently reside at Cedar Road in Mount Eden, Auckland. The house is valued at NZ$4 million. - David Govind 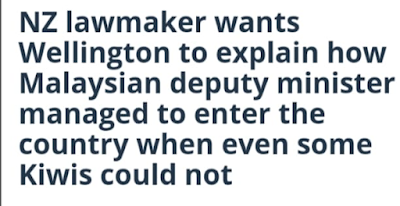 Questions are being raised in New Zealand over how Datuk Seri Edmund Santhara Kumar secured a place in the country’s managed isolation and quarantine (MIQ) system when many New Zealanders are unable to return home.
According to Kiwi news portal Stuff, National party Covid-19 Response spokesman Chris Bishop has called on the government to explain the details behind the Malaysian deputy Federal Territories minister’s entry into the country to visit his family. He was quoted as saying that many New Zealanders have been trying to get back, including circumstances where they have been trying to return to see dying loved ones.
“The real questions are around how he got into MIQ, there are a highly limited number of spaces, and so people will be pretty concerned if there is special treatment given to him, and the government needs to be up front about that.”
The Stuff report said it is not clear whether Santhara, who is also Segamat MP, travelled on a personal or diplomatic passport, noting that diplomats are exempt from paying MIQ fees. It also reported that the New Zealand government is refusing to confirm key details behind Santhara’s arrival in the country and isolation on Christmas Eve last year for 16 days. It said Kiwis wanting to return home from overseas have to likely wait months if they have not booked for the isolation. 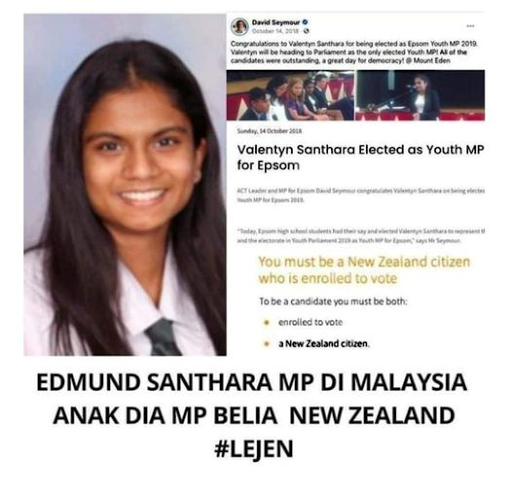 The report added that Air New Zealand was ordered by the government to freeze international bookings as Kiwis were flocking home for Christmas. The Business, Innovation and Employment Ministry, which oversees MIQ facilities, and Immigration New Zealand both cited privacy in saying they are unable to disclose the information requested.
On March 2, The Vibes reported that Santhara was a director of a New Zealand-based company, called V3S Trustees, and held a 20% share for a mere five days before the stake was transferred to his wife, Carline D’Cruz.
According to a document on the Land Information New Zealand portal, Santhara and his wife had initially planned to purchase a house and sought to emigrate to the Pacific country some time before 2011, with the purpose of educating and bringing up their family.
The filing stated that they applied to the New Zealand Immigration Department for permanent residency before “a change in circumstances” led them to reverse their intention. A Stuff representative, who enquired at a home in Auckland’s Epsom area listed as being owned by Carline, was told by a woman at the address: “We’re not interested in talking about it.” – The Vibes 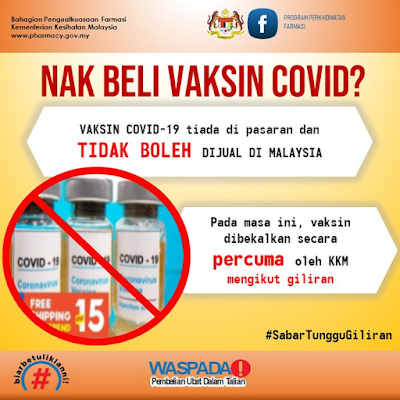 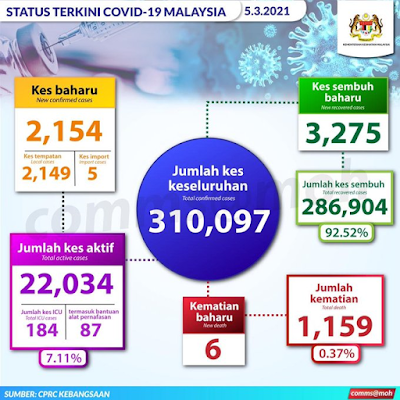