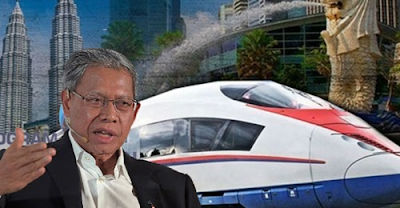 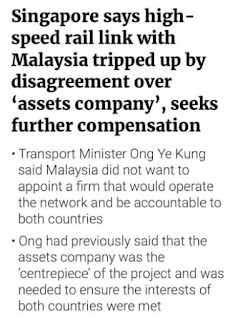 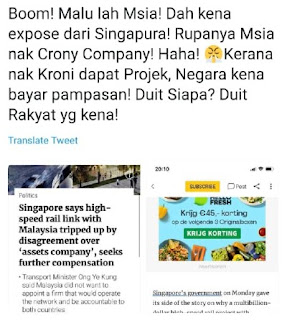 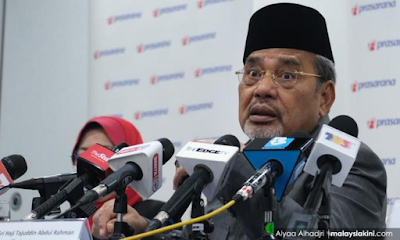 Tajuddin rebuffs advice not to interfere,
says LRT3 should back bumi firms...
Prasarana Malaysia Berhad chairperson Tajuddin Abdul Rahman, who is in a tussle with MRCB-George Kent, the turnkey contractor of the LRT3 project, said they should follow national policies by supporting bumiputera firms.
He added that a "topmost" Prasarana officer was of the view that the project owner should not interfere in MRCB-George Kent's choice of sub-contractors, but Tajuddin said he disagreed. He also disagreed with the term "interference", stating that Prasarana was "being in the know" (ambil tahu) and it was the project owner's right to do so.
"We need to support the government's policy and give priority to local contractors. "One more thing, we should also support the government's policy by encouraging the participation of bumiputera contractors. "As project owner - at least for me, I don't know about past chairpersons who may not care about this - but I care. The participation of bumiputera contractors is important to me. It is a policy which we need to support," he said.  Tajuddin revealed that a "topmost" Prasarana official had opposed to the approach but did not name him.
Earlier, Tajuddin confirmed that Prasarana president and chief executive officer Muhammad Nizam Alias had been suspended for "insubordination". "We are taking the initiative to be in the know, but there is a topmost officer whose name I don't want to mention - you can guess - who said that since they (MRCB-George Kent) have been appointed as the turnkey contractor, we should not interfere in what they are doing. "They can do as they wish. For me, that is not right. As the project owner, we need to be in the know. Being in the know is not interference. "It is not being a busybody, it is our right," he said.
On Dec 31, MRCB-George Kent, along with 16 of its subcontractors, complained to the government that Prasarana was withholding RM700 million in payments for their work done on the LRT3 project. Sources told Malaysiakini that Tajuddin had wanted certain subcontractors to be appointed for the project.
Addressing the LRT3 contractor's claim that he was withholding RM700 million in payment to them, he said: "For your information, we have paid MRCB-George Kent a sum of RM3.468 billion." He insisted that the last payment was made to MRCB-George Kent in October last year for work done until the end of the month, contrary to reports quoting sources who claimed the outstanding payment comprises work completed from July onwards.
"Where is the delay (in payment) of up to six months?  "They said we withheld payments, it is not fair. They (MRCB-George Kent) are a big contractor," he said. 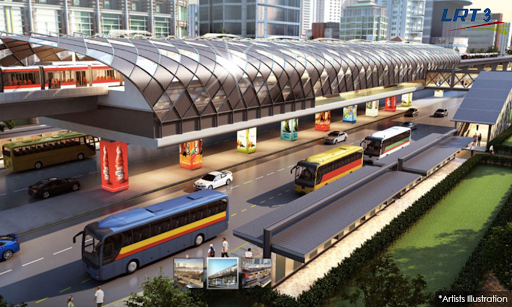 Tajuddin, however, declined to confirm or deny reported claims that the October payment said to amount to RM280 million was only for work done between February and June. Given MRCB-George Kent's status as the project's turnkey contractor, Tajuddin said Prasarana had an expectation that the company would have enough funds to pay its subcontractors.
"They don't have the money and they asked all their contractors to complain. "They should have had enough capital," said Tajuddin who was initially reluctant to speak on MRCB-George Kent's finances. "But when the game is played in such a way as if we are doing unfair things to them. "I want to tell you we have paid," he said.
Tajuddin also claimed he had received complaints over MRCB-George Kent's alleged delays in signing new agreements with the subcontractors after their appointment as the turnkey contractor. He further claimed that some of the new agreements were signed at a value lower than what was previously agreed upon with Prasarana.
On Prasarana's current finances, Tajuddin revealed that the company is operating on a shortfall of RM236 million a month, an amount covered by its current available funds of approximately RM2 billion.
After taking into account Prasarana's monthly operating and capital expenditures, Tajuddin said the company is left with slightly over RM800 million while waiting for a capital injection of around RM1.5 billion from the government which was recently approved in Parliament.
"(We are) left with RM844 million... that is what we have now. "If we pay MRCB-George Kent everything (we have), we are done for (habislah) Where is the money to run the show?" he said.
Overall, Tajuddin insisted he had merely advised Prasarana's management and board based on his observations of the situation. The LRT3 project started in August 2015 with an initial budget of RM10 billion to serve some 2 million people along the Bandar Utama-Johan Setia route but the costs tripled to a whopping RM31.65 billion. It was among several mega infrastructure projects reviewed by the federal government after Pakatan Harapan came into power in May 2018. - mk
No need to spin kononnya nak support Bumiputera. You also a bumi, supporting you means supporting bumi lah tu. Cakaplah nak lobi untuk syarikat anak dan kroni.- Fuuyo
You're a non-executive Chairman of the Board. You're not the CEO. When something goes wrong, he'll say there's the Board of Directors (to take the blame). Like MO1 tried to blame the Board of 1MDB. - Onlyme 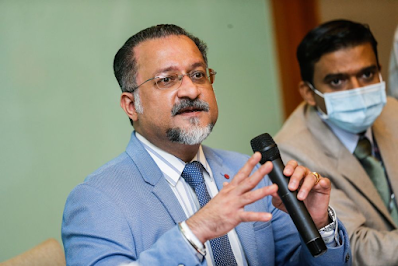 Private clinics in Penang to offer
free Covid-19 vaccination services...
About 100 private clinics under the Penang Medical Practitioners’ Society (PMPS) are ready to offer free Covid-19 vaccination services to the people in Penang. State Housing, Local Government, Town and Country Planning Committee chairperson Jagdeep Singh Deo (above) said the state government and PMPS reached the agreement as preliminary preparations to increase capacity and expedite vaccinations after the vaccine arrives in Malaysia.
He said the vaccines will be distributed by the Health Ministry (MOH) to each state which will later distribute it to hospitals, as well as public and selected private clinics to provide vaccinations to the Penang residents. “So far, 100 private clinics have agreed to provide free vaccination services to the entire population of Penang. I understand that 50 clinics in Seberang Perai, as well as 50 clinics on the island, have agreed to help the MOH increase the capacity of the vaccination process. 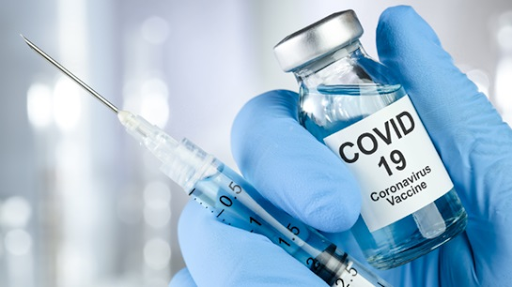 “We are looking at the issue of whether the existing clinics are capable of accommodating such capacity. What will happen when the vaccine arrives? We have 1.8 million people who need to be vaccinated. Can you imagine what is going to happen?” he said to reporters in George Town today.  The Covid-19 vaccine is expected to arrive in Malaysia next month.
Speaking on the question of capacity, Jagdeep said the federal government should increase the number of panel clinics that do Covid-19 screenings for foreign workers due to concerns of the spread of Covid-19. He said recently the Social Security Organisation (Socso) revealed that only 8.5 percent of foreign workers in the country had been screened. He described this figure as too small.
“So far, the government has allowed 3,000 screenings per day in each state. For me, the capacity can be increased so that we can do screenings and take quick action,” Jagdeep said. He added that in Penang, only 51 clinics were authorised to conduct Covid-19 screening tests on a total of 180,000 foreign workers there. - Bernama 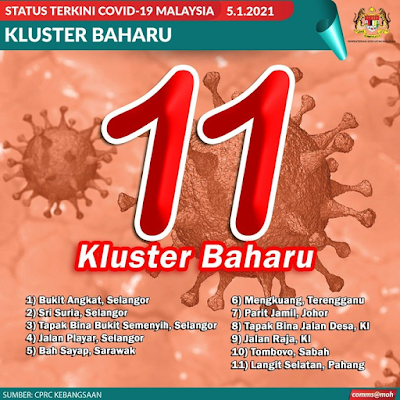 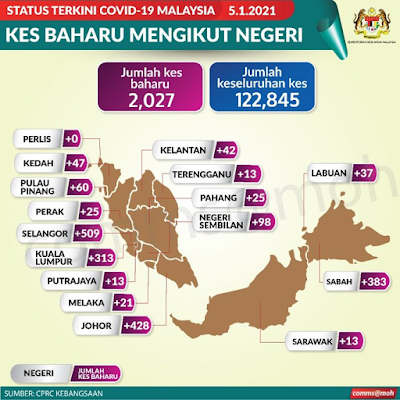 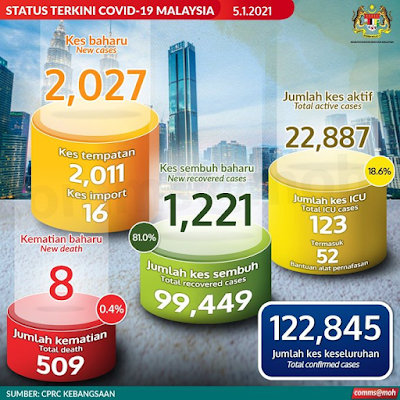