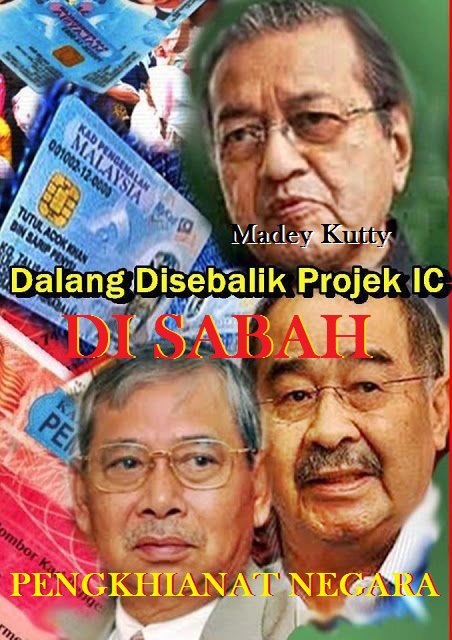 What Are The Lessons Learned from Sabah Invasion...

Malaysian superior and mighty security forces has flushed out the Sulu Sultanate armed invaders – BRAVO to our brave and courageous boys. It was reported 52 of the intruders, together with their general were killed. Although there’re still leftover from the 100 – 500 who came and try to invade Sabah, Malaysian military should have sufficient firepower to neutralize them, once and for all. The best news – none of our security forces personnel was injured since the “Operation Daulat” started with an airstrike by jet fighters of the Royal Malaysian Air Forces. For once, it gets you thinking – what were these intruders thinking – that they could defeat 100,000 Malaysian military forces with their 100 – 500 Rambos? 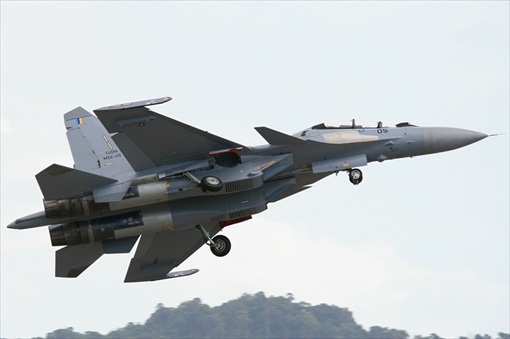 However, there were confusions and doubts as to the effectiveness of the airstrike as the “mopping up” operations couldn’t find any bodies, according to Agence France Presse. On the other hand, spokesman for sultan Jamalul Kiram III claimed the bomb exploded  as far as 1 km away from his men’s location. It would be a magnificent scenario, with intruders watching the fireworks while devouring their barbeque chicken wing 1km away. They even claimed that the airstrike had actually hit Malaysian own soldiers who moved in to the camp left by the intruders.

While every Malaysian is celebrating the victory, the self-proclaimed sultan Jamalul Kiram III is now proposing an exchange of hostages. It seems conflicting reports are making everyone frustrated. Malaysian authorities should be transparent as to the claims made by the intruders. Like it or not, this Sabah invasion issue will not disappear so soon. Nevertheless, what can we learn from this crisis and the weaknesses exposed? The country has lost 8 lives and most importantly the permanent lost-love which is irreplaceable, even with promotions and millions of dollars in assistance funds. 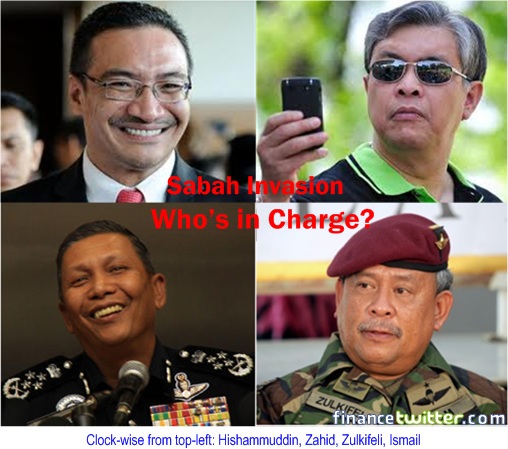 The most sparkling question - can the 8 fallen heroes be avoided, or at least minimized? Based on the ultimate airstrike and ground attack decision which saw no casualties from Malaysian securities forces so far, the answer is obvious. The 8 families could still enjoy their father and husband’s loves, if a clear chain of command and a competent leader was in order in the first place. You do not negotiate with terrorists, let alone sending KFC and Tropicana orange juices to them (*grin*), to the tune of 2 weeks before recognize they’re dangerous. If Cuba were to do the same to Florida, US military would have finished them within hours, the most – mission accomplished.

If there’s one thing that PM Najib should do after this crisis, it is to transfer Home Minister Hishammuddin Hussein, his cousin, to probably Ministry of Youth and Sports. This man’s incompetence is beyond anyone’s imaginations. In fact, there’s no difference if you put Hishammuddin or Ng Yen Yen in charge of the Sabah invasion crisis management. Both would screw up big time since they tend to use their mouth instead of brains to do the thinking. Regardless of their religion, a terrorist is still a terrorist and you do not negotiate when your sovereignty has been breached. You do not call for a time-out to negotiate for 2-weeks when you’re being raped, do you (*tongue-in-cheek*)?

To make things worse, the chain of command was not visible at all. People do not know if the Home Minister or the IGP (Inspector General of Police) Ismail Omar was in charge initially. Their statements contradicted each other so much so the terrorists were having lots of fun and time exploring their newly invaded land as if they were tourists. Thereafter you’ve Defence Minister Zahid Hamidi and Armed Forces chief Gen Zulkifeli joining the party, and yet there was no clear sign of who was actually in charge of the operation. Once, IGP claimed the airstrike killed 12 Filipino gunmen but later the Armed Forces chief clarified that the 9 bodies of Sulu militants discovered were of those killed in last Friday’s shootout, and not by the air strikes.

Maybe Malaysia has been enjoying too long a peaceful period that the distance instance of war was not considered into the national security SOP. A clear chain of command should be drafted (if there’s none) for such crisis, and if there’s already one, why wasn’t it followed? If their intention was to be front-paged in newspaper as if they’re war hero, politicians should be thrown out from the command centre’s windows. Let the real man do the job. 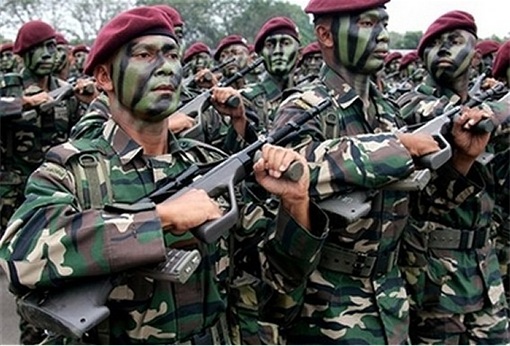 The Defence Ministry got RM15.2 billion and RM13.7 billion in their 2013 and 2012 annual budget respectively. While the country has a total of 44 fighter aircraft ranging from Sukhoi Su-30, F/A-18 Hornet, MiG-29, Tiger and Hawk, there seems to be a serious lack of military transport aircraft. The country has 16 units of Lockheed C-130 Hercules with capacity of 92 troops each. Considering you need to transport military hardware into the warzone, there’s hardly any decent transportation means to deliver soldiers to the battleline. This was the reason why  the request for AirAsia Berhad’s (KLSE: AIRASIA, stock-code 5099) commercial flights to transport more army into Sabah warzone.

Perhaps PM Najib failed his geography or he didn’t know that Peninsula Malaysia and the East Malaysia is separated by South China Sea. If the country can afford a US$75 million Boeing 737-700 for his VIP usage, surely a decent number of military transport aircraft should be in the inventory to transport personnels between Peninsula Malaysia and the East Malaysia, no? As former defence minister, PM Najib should know the importance of such basic necessity. Wouldn’t that be more important than 2 units of Scorpene submarines purchased at the cost of RM3.4 billion? Heck, the money spent on submarines alone can be used to purchase 10 units of Boeing 737-700 with lots of loose change left.

Sure, you may argue that even US military utilizes commercial flights to transport their army. But in the case of US, they only activate such plan during a major operation involving hundreds of thousands of soldiers and tons of hardware equipments. They used it when they need transportation far away, such as in the Middle East. Do you think the US army would be made to check-in at commercial airports before being transported if their own country is invaded? US would be reduced to the size of Singapore if they need 2-weeks to transport army when attacked by Cuba (*grin*). 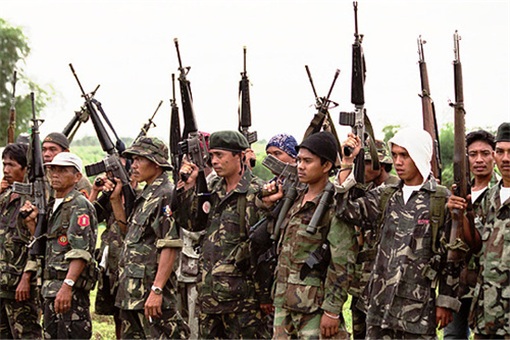 Admit it – Sabah and Sarawak are sitting ducks waiting to be invaded anytime by anyone. During the Sabah invasion crisis, up to 7 battalions (about 7,000 soldiers) from Peninsula Malaysia were sent to Sabah. Does that means Sabah alone cannot defend itself from 200 terrorists, since the state does not even have 7,000 soldiers, out of the country’s 100,000 strong army? If Sabah has the numbers, why wasn’t it used instead? Even if Sabah doesn’t have 7,000 soldiers, couldn’t some be sent from Sarawak instead? AirAsia operates between Sabah and Sarawak right?

While Sabah has a long coastline to defend, you do not have to be a genius to figure out where the pirates’ favourite landing points are. Unless they come in using submarine or aircraft carrier, chances are they would be using the same routes as how they migrate illegally into Sabah and subsequently given their “ICs” by former premier Mahathir. If you think the military intelligence does not have this information, then you’re insulting one of the best intelligence units in the world. Furthermore, it’s not as if only Malaysia has coastline on the planet.

Now that Sabah has been breached easily by a mere 200 terrorists, there’s a need to restudy the existing national security scope and coverage. If the Sulu Sultanate managed to invade Sabah about a month ago, chances are they would be able to do it again in the future. They must be stopped at all cost, unless you want to grant more “ICs” to them in exchange for their votes. 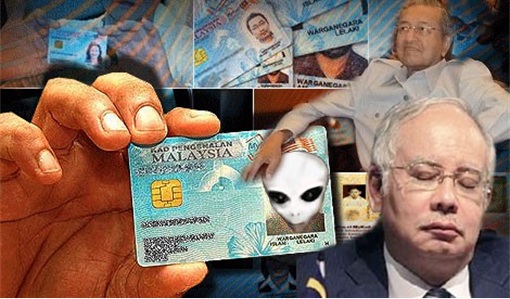 The allegations about Malaysia being training camps for terrorists can be googled on the internet. And it’s a known fact that Malaysia trained many of the MNLF (Moro National Liberation Front) commanders during their war against the Philippine government. Hadji Acmad Bayam, former chief propagandist of the MNLF, revealed to the Manila Bulletin that these MNLF forces may have at their disposal a huge arsenal, which they hid deep in Sabah’s rugged terrain when they returned to the Philippines after their rigid training. He claimed among the firearms are Belgian-made G1 and FAL, which the late Libya leader Colonel Gaddafi supplied through Malaysia.

To add insult to injury, Bayam said he was confident the Malaysian authorities will not able to find the hidden MNLF firearms because they were kept very well by the MNLF commanders who stayed behind in Sabah. Now, before the Malaysian government rubbish such claims, Najib administration should confront his mentor Mahathir about this extremely dangerous allegation, unless he wants to keep a time-bomb behind his backyard. If this is true, Sulu Sultanate followers or any Filipino Malaysians can stage another havoc within Sabah itself, whenever they feel like doing so. The sight of these people who can appear to be an innocent citizen and yet can change to a terrorist with a blink of an eye is absolutely scary.

As of now, it’s still too early to declare a complete victory over the crisis. The Sabah invasion has opened up a new chapter or wound that may not heal as fast as it started. The war is not over yet. But there’re already 8 families who have lost their father’s and husband’s love forever, thanks to politicians’ incompetence and arrogance.- financetwitter@financetwitter.com 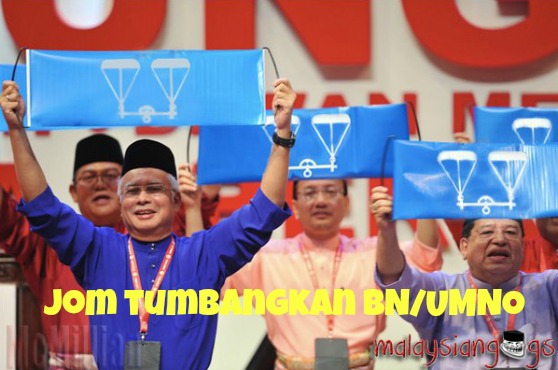