Anwar: PH did explore Dr M option,
but he doesn't have numbers either...

Pakatan Harapan did discuss Dr Mahathir Mohamad as a second option for prime minister, said PKR president Anwar Ibrahim. He said this was suggested in order to secure the numbers to take over Putrajaya.

However, Anwar said that Mahathir does not have the numbers at the moment either. Addressing his supporters via Facebook live, Anwar said DAP and Amanah had never strayed from supporting him to become prime minister.

"But what is clear now is that we don't have the numbers. So our friends (DAP and Amanah) said, 'In that case Anwar, can we think of a second option, that is to give room to Mahathir?

"Some believe that Mahathir can get the numbers, but to this day it has not materialised," he added. Anwar, however, did not say whether PKR or Harapan as a group agreed to this second option during the meeting.

He did say that PKR could not agree with making Mahathir the prime minister, and that there was apprehension due to past experiences in dealing with the nonagenarian. Anwar also said the fact that conditions were set to make sure Mahathir resigned in six months showed that DAP and Amanah also did not fully trust him. 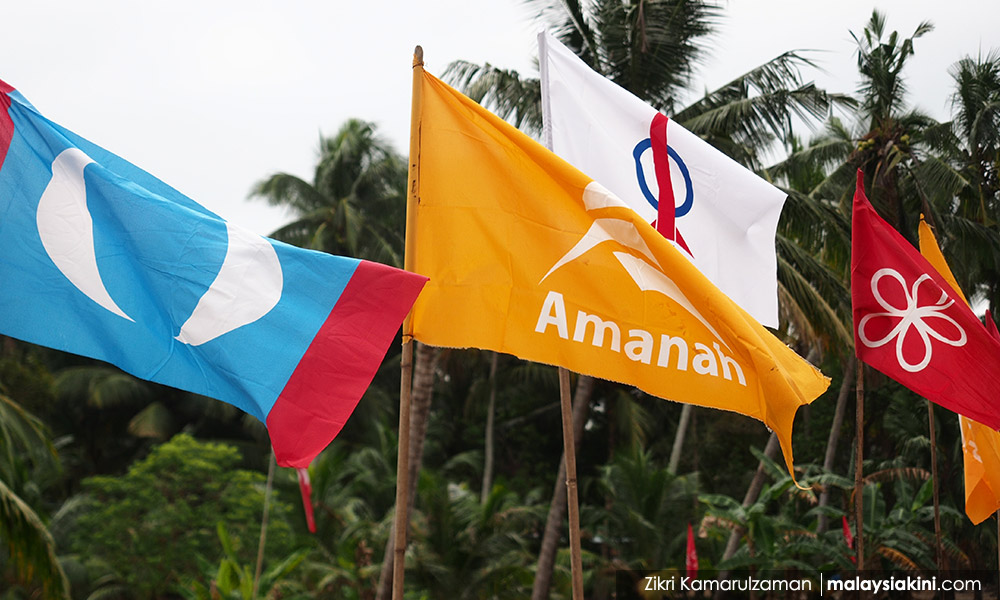 Previously DAP and Amanah said the Harapan presidential council had endorsed Anwar as prime minister during the May 30 meeting. They added it was also agreed that the fallback was for Mahathir to become prime minister if Anwar couldn't get the numbers to form the government.

Part of the reason cited was that the PKR chief had failed in a bid to secure GPS support.  Anwar tonight said he was in Sarawak on Tuesday to meet "old friends" who had invited him to the state. He did not say who those old friends were and refused to comment on whether GPS had rejected him as was reported by The Malaysian Insight.

"People say GPS rejected Anwar, I leave that to GPS, they are an independent party representing the people of Sarawak who should be free to determine their stance.

"I don't want to say more on that, other than to say that our efforts are ongoing," he added.

Anwar said PKR has not given up on wanting to retake power from PN, but that they would not resort to buying or threatening MPs.

"We hope to attract the interest of our MP friends, from all sides, to save the country and economy," he said. 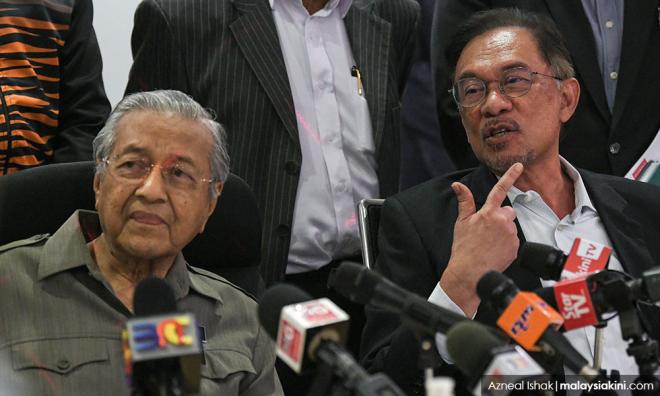 So much hot air for days over on who should be the candidate for the prime minister post in the event of a Pakatan Harapan government, and for the moment - the fissures in the coalition still can’t be plastered over.

Some clarification comes with PKR digging in their heels and saying its party president, Anwar Ibrahim, is the man for the job, suggesting a role for Dr Mahathir Mohamad in the government is open for discussion. A case of once bitten, twice still not shy, but to be bitten a third time would give the impression they were hopeless idiots incapable of learning.

Possibly in apropos, I thought of Goldfinger explaining to a captive James Bond how his cover was blown: “Mr Bond, they have a saying in Chicago: 'Once is happenstance. Twice is coincidence. The third time, it's enemy action'.”

The picture turns surreal when one factors in the reality that for the moment Mahathir and his supporters are no longer members of Bersatu. Their lawyers have filed an ad-interim order to note that they had not enough time to submit an actual interim injunction challenging the nullification of their party membership. 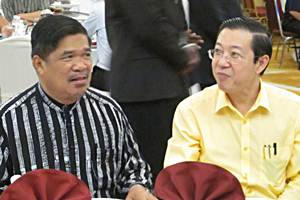 We are in for a long legal haul here (is there any other?) – two interims at the start, and we haven’t even come to the appeals and counter-appeals, medical leave, et cetera. In the meantime, Mahathir is party-less.

In a harmonious balance, he is not alone. Former PKR deputy president Azmin Ali and his gang of nine are still party-less too. Bersatu has counted them as members – except for the technical oversight of them still not having filled in and sent in their membership forms. Perhaps they are busy testing the comfort of their new seats of power and forgetting this mundane chore?

This clerical oversight spawned a rumour, quickly scotched, that Azmin and gang were forming a new political party. Hey, why not? We already have 37, what’s another one? For that matter, Mahathir could form another party – we can never have enough political parties defending the rights of the downtrodden, disadvantaged majority.

The realpolitik may be hard to swallow, but Mahathir’s assertion that a Malay party has to be part of Harapan Plus has weight. There are parts of society whose world view is through a racial/religious lens. But does it have to be the leading, governing party? Must balance the picture again, a symmetry of minorities, like Prime Minister Muhyiddin Yassin (below) feeling the pressure of numbers, with Umno breathing heavily at his shoulders?

Mahathir says he will use six months as prime minister to groom his successor in the ways of the office. Anwar in tuition class for six months, with homework? Cram in what wasn’t done in the two years when they had their hands on the levers of power? 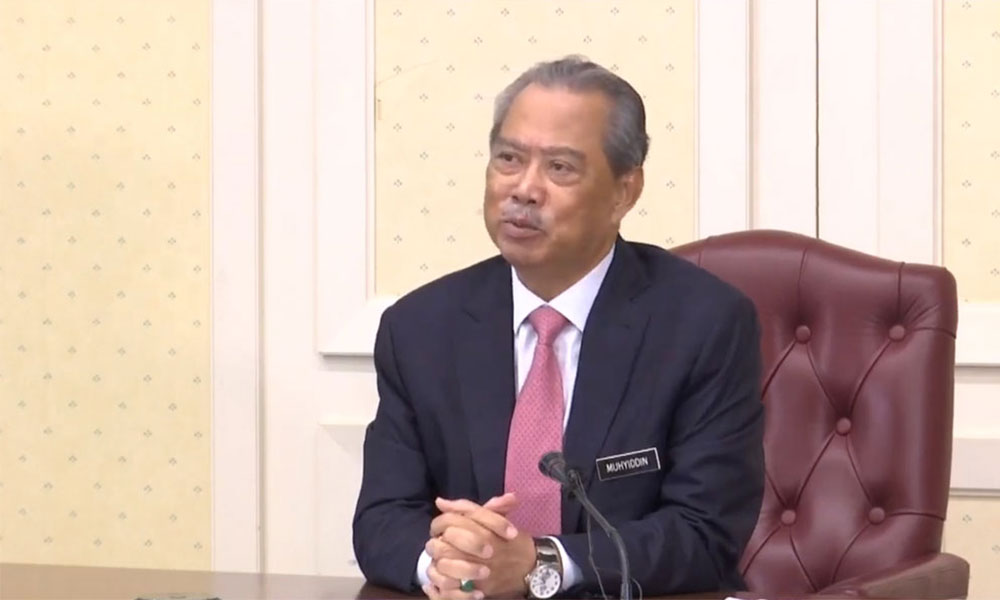 Assuming that’s the timeline (and PKR has relented), what will happen is that Anwar becomes prime minister, and will immediately chart his own course away from the shadow of Mahathir, showing he is his own man… at last.

I agree with Mahathir on one point: "So if we want to choose a prime minister, the candidate is not important. Winning (over) the majority (in Parliament) is what is important.”

That’s the crux of the matter. Leaving aside personal/political preference for prime minister, can either Mahathir or Anwar deliver enough bums to occupy a majority of seats in Parliament in July?

Who got how many? If one can claim a majority, fine. If both can’t count on a majority, this is a waste of time, with the cost of a souring of the coalition – sensitivities trampled on, prickly pride puffed up.

I end on a note to readers of Malaysiakini who have been injudicious in their comments, leading to editor-in-chief Steven Gan having to get all togged up in a suit to wear in court so people won’t think he’s there for stealing petai.

It’s just a matter of perspective, a matter of being positive about life. A recent court acquittal was evidence of a corruption-free society. Surely something to cheer, not jeer. - Thor Kah Hoong,mk