PAS refuses to give any seat to partner UMNO... 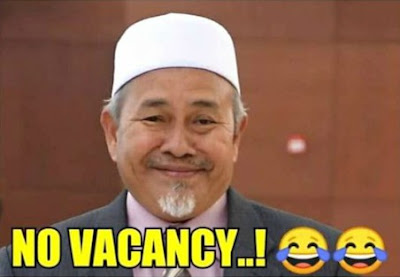 Despite Zahid’s apology and begging...

Malay unity is nothing but empty rhetoric trumpeted by Malay politicians desperate for gullible Malay votes, as did “Buy Muslim-made First (BMF)” campaign triggered by UMNO’s racism and extremism initiative to put Malays and non-Malays at loggerheads. Clever, moderate and right-thinking Malays do not believe in Malay unity, let alone a domestic trade war with non-Malays.

Smart Malays knew the so-called “Malay Unity” was a scam hatched by UMNO after the Malay nationalist party lost its power for the first time since the country’s independence 62 years ago. Prior to the May 2018 General Election, the arrogant and corrupt UMNO had never bothered about Malay unity otherwise former premier Najib would not have had been defeated.

Yes, had former UMNO president Najib Razak and PAS (Pan-Malaysian Islamic Party) president Hadi Awang joined forces against the Pakatan Harapan (PH) coalition, the crooked prime minister would not be looking at spending years in prison today. But Mr. Najib thought he was super-smart paying only RM90 million to PAS to engage in three-cornered fights with PH.

Mr. Najib had admitted that the strategy to go for three-cornered fights had resulted in the coalition losing the 14th general election. He had confessed that his strategy was to split non-UMNO votes between PAS and Pakatan Harapan so that UMNO would get the majority. But clearly the simplistic strategy had backfired spectacularly. And UMNO lost its shirt.

PAS states would not open up their exco positions
for UMNO despite their recent charter...

When PAS and UMNO, two largest Malay-based parties in the country, officially signed a political pact on September 14, the 94-year-old Mahathir Mohamad was incredibly panicked. He blinked. After all, the last time UMNO and PAS cooperated was during the 1974 General Election, when PAS candidates contested under the Barisan Nasional banner.

So the Malay Dignity Congress was hatched under the nose of Mahathir. The congress, which was jointly organised by Universiti Malaya (UM), Universiti Pendidikan Sultan Idris (UPSI), Universiti Putra Malaysia (UPM) and Universiti Teknologi MARA (UiTM), opened with a bang when the chief organiser – Zainal Kling – issued a warning to non-Malays about the suspension of their citizenship.

Today, it has proven again that PAS and UMNO, despite their less than 2-month marriage, don’t actually trust each other. It seems Mahathir has become a sucker. PAS deputy president Tuan Ibrahim Tuan Ibrahim has essentially told his new ally to fly kite when he announced that PAS administrations in Kelantan and Terengganu do not have space for UMNO lawmakers.

The No 2 strongman of PAS said – “The people have given us mandate in the 14th General Election and we agreed that PAS and UMNO will work as a team. They are not Opposition in the state, even if they are not directly involved in the running of the state. The “exco” (executive council) positions are full. Every quota is filled.” It seems UMNO has become a sucker too. 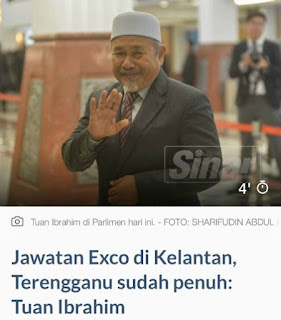 After the May 9 2018 general election, PAS won 37 seats while UMNO captured 7 seats in the 45-seat Kelantan State Legislative Assembly. PAS also won 23 seats while UMNO grabbed 10 seats in the 33-seat Terengganu State Legislative Assembly. So why can’t the stingy PAS give at least 1 seat in the executive council in both states to UMNO, its newly married partner?

More importantly, the refusal to include UMNO in the government Terengganu is a humiliating slap in the face of Ahmad Zahid Hamidi, the president of UMNO. Just 3 days ago (Oct 26), Mr. Zahid hinted at PAS to include his party’s lawmakers in the state government of Terengganu during his opening speech at UMNO Terengganu Convention.

Yes, not only did the Java-immigrant Zahid plead with a begging bowl to PAS Islamic party to be given some space in the administration of Terengganu, the former prime minister had also openly apologised – from head to toe – to PAS for “past deeds”. However, it appears Zahid’s sucking up to PAS leadership was seen as a sign of weakness – worse than a pariah beggar.

Interestingly, a day after both PAS and UMNO formed their grand political alliance on Sept 14, it was PAS president Hadi Awang who told all and sundry that his Islamist party planned to include bedfellow UMNO in the two states it currently rules, adding that they will make a public announcement in the near future. But nothing happened until Zahid begged three days ago.

So what had happened within a short span of 6 weeks since the fanfare signing ceremony of the UMNO-PAS charter at Putra World Trade Centre (PWTC), where thousands of their supporters attended and even cried at the historic cooperation? What type of nonsense is the Malay unity that PAS has been chest-thumping if it can’t even allows UMNO in the Terengganu government?

At best, the mistrust between PAS and UMNO finally rear its ugly head. Hadi Awang could be toying with Zahid Hamidi when he promised to include UMNO in the administration of Kelantan and Terengganu. Even if the PAS president wanted to, he probably realised how much the PAS grassroots members reject and despise the idea of sharing power with their once bitter enemy. 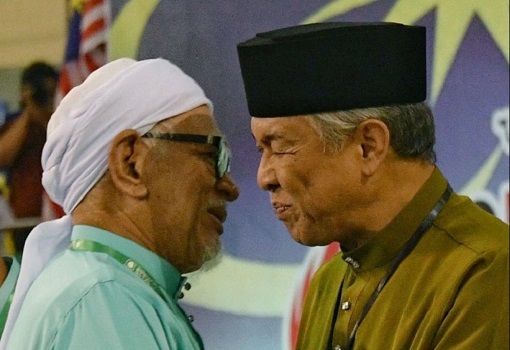 They can pretend to love each other...

At worst, PAS has started sabotaging ally UMNO to help PM Mahathir wins the coming Tanjung Piai by-election. Earlier on Oct 24, in order to stop prime minister-in-waiting Anwar Ibrahim from becoming the next premier, 18 MPs from PAS and 6 MPs from UMNO have expressed support for Mahathir to remain prime minister for the full electoral term of five years.

An embarrassing defeat in the Tanjung Piai by-election could be used as a referendum that Mahathir’s premiership and leadership are rejected, pressuring him to pass the baton to Anwar. PAS’ latest rejection of Zahid’s request to running the state of Terengganu together could be a signal to PAS Johor machinery not to take the by-election seriously.

If PAS can’t even agree to a small sacrifice like sharing one “exco seat” at the state level, exactly how could both PAS and UMNO agree to a bigger sacrifice at the national level – seat negotiations and allocations for the next 15th General Election? This is precisely the reason why smart Malays do not believe in this junk called Malay unity.

There are simply too many greedy and corrupt Malay leaders wanted to become the next prime minister. Do you really think Mahathir Mohamad, Anwar Ibrahim, Azmin Ali, Hadi Awang, Najib Razak, Zahid Hamidi, Hishammuddin Hussein, Khairy Jamaluddin and whatnot really care about the Malay welfare, let alone the Malay dignity, as screamed by that Professor Kling?

A Chinese idiom says, “One mountain cannot contain two tigers.” But in the case of Malaysia, there are at least eight Malay tigers fighting each other to enrich their families and cronies. Only a fool would think Mahathir, Hadi or Zahid genuinely desires Malay unity for the sake of the community. If they are genuine about it, UMNO, PAS and Bersatu would have been “merged” already.

Politics is the most lucrative business in Malaysia, especially for Malay elite politicians. Najib Razak provides the best example that a career in politics is the formula to become a multi-billionaire. What you need to do is to stir up racial and religious sentiments among the Malays that the Muslims and Malay Rulers have lost power to the “Chinese, Christians and Communists”. - FT 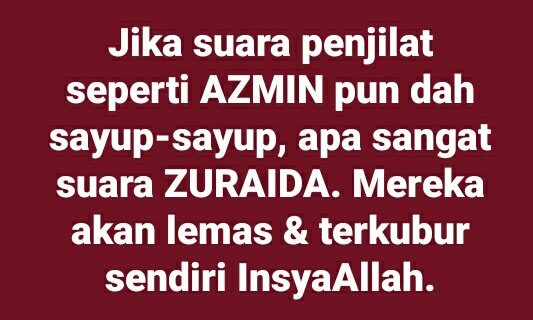 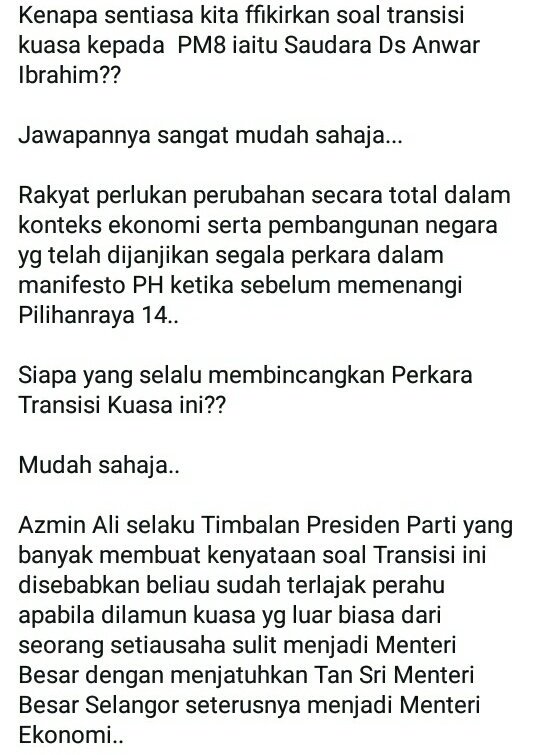 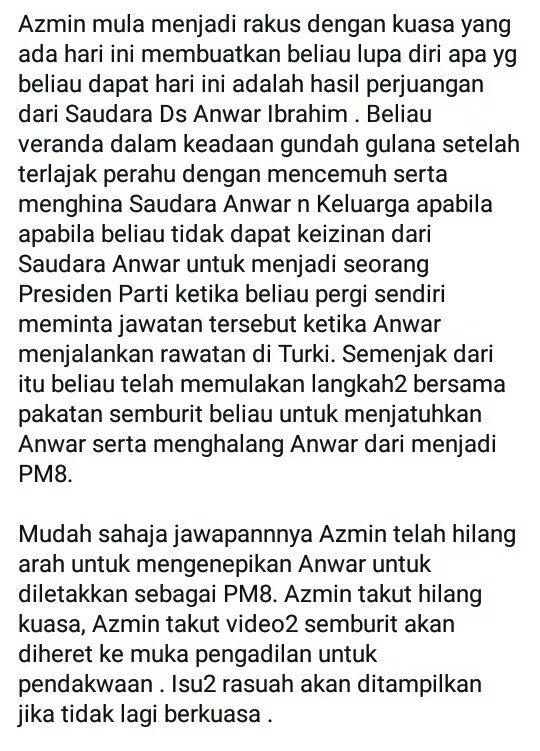 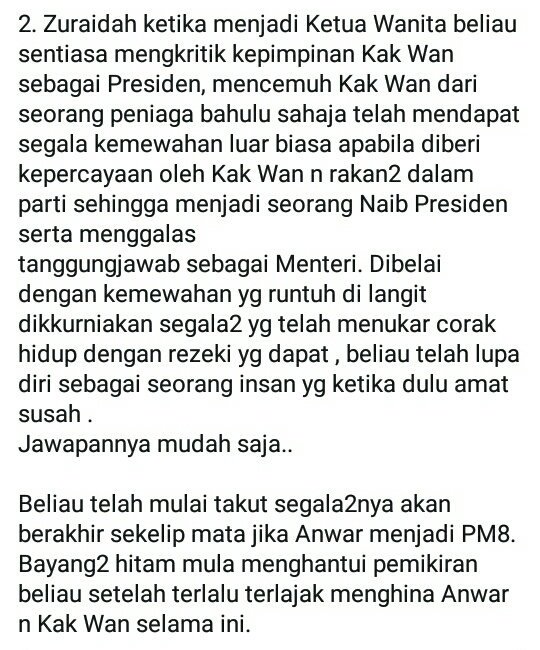 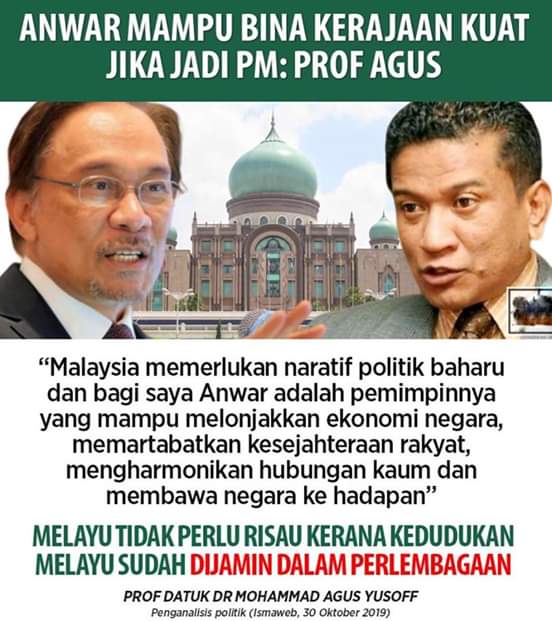 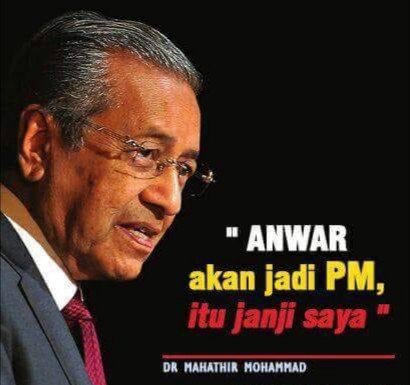