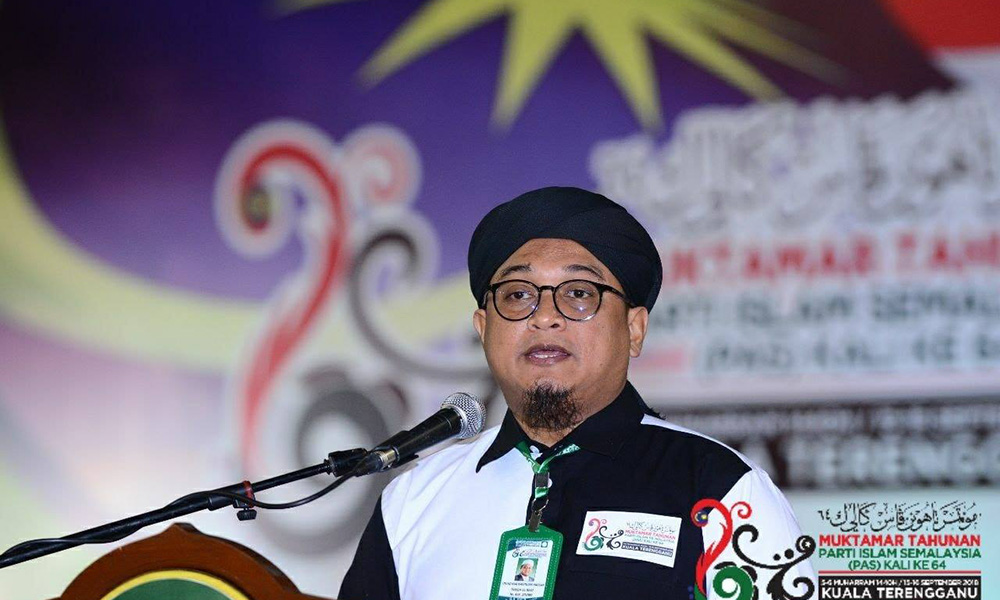 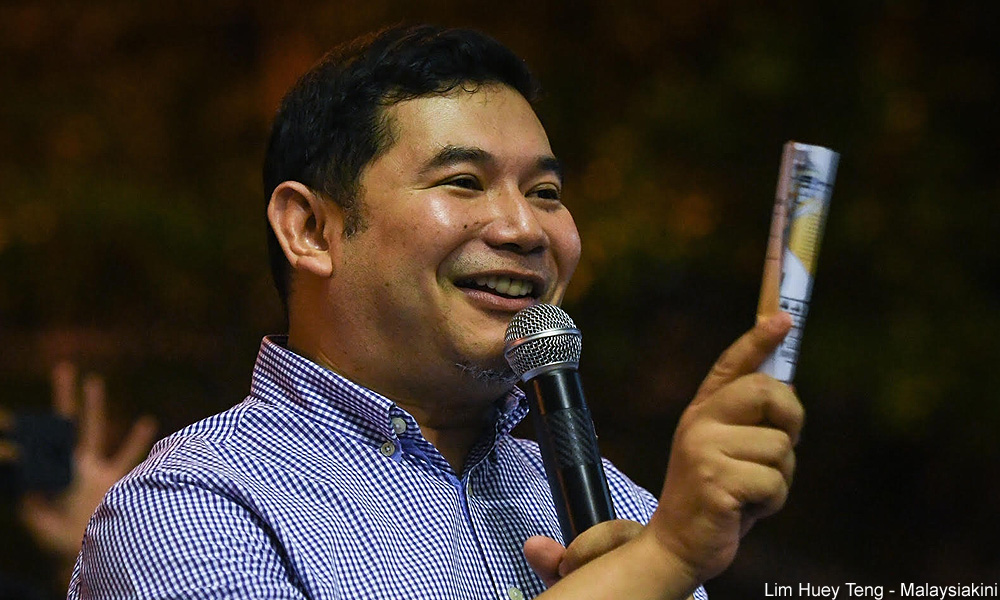 In a Facebook posting this afternoon, the PKR vice-president detailed how he had cracked the case. According to him, the 10-digit Bank Islam account number stated in a confidential letter published by Rewcastle-Brown this morning was part of a 14-digit account number.

The chartered accountant turned politician said he discovered the rest of the digits by making comparisons with the account numbers on other Bank Islam cheques. With the proper account number in hand, Rafizi claimed he successfully transferred RM10 to the account.

The PKR leader also named the account holder. Malaysiakini learned that the person heads a GLC. Malaysiakini is attempting to contact this individual, who is described as an old-time friend of PAS president Abdul Hadi Awang.

Earlier today, Rewcastle-Brown confirmed that Hadi had paid her RM1.4 million to settle his defamation suit against her, which was filed in London. Following this, PAS information chief Nasrudin Hasan claimed that the Bank Islam account used to purportedly transfer the RM1.4 million is fake.

"Some friends checked the account number which is being shared (on social media) by trying to transfer RM5 and RM1, and the account doesn't exist," he said on Facebook. Nasrudin also urged others to attempt transferring funds to PAS' authentic Bank Islam account.

However, Rewcastle-Brown's lawyer Americk Sidhu told Malaysiakini that the cheque was written in front of him and that it had cleared into the Sarawak Report editor's account.

Hadi had sued the London-based Rewcastle-Brown over an article published in Sarawak Report that PAS received RM90 million from Umno during the leadership of former premier Najib Abdul Razak in exchange for the Islamist party's support in the last general election.

Earlier last month, Hadi and Rewcastle-Brown agreed to settle the case out of court. Both PAS and Najib have denied the RM90 million allegation, which is now the subject of an MACC investigation. - mk Time To Clear The Air On The PAS Payment ...

PAS, Malaysian Islamic Party, thought they could play everyone and get away with it. But it appears 2019, the Year of the Pig according to the Chinese zodiac, could be a terrible and unfortunate year for the party. PAS President Abdul Hadi Awang has essentially opened the floodgates of hell when he agreed to an out-of-court settlement for his defamation suit against Sarawak Report.

The settlement, first offered by Mr. Hadi and agreeable by UK-based Sarawak Report editor Clare Rewcastle Brown, was struck just days before the Chinese celebrate the Chinese New Year. Since then, one misfortune after another hit the political party, known for spewing hatred among Malay-Muslims that Chinese, Christians and Communists have taken over the country.

The out-of-court settlement is widely seen as an admission that under the supposedly God-fearing Islamist party, they had taken bribes. Abdul Hadi Awang has been rambling and babbling – fictitiously – about Muslims and Islam under attacks to divert attention. He is trapped in his own greed, as the RM90 million bribes he received from former Prime Minister Najib Razak spread like wildfire.

Of course, all hell breaks loose when Mahathir told all and sundry about the PAS trio’s bizarre commitment. The revelation of the Islamist party’s pledge – in writing – to support the prime minister has caught the three musketeers off guard as the agreement was supposed to be kept secret. Hence, PAS has been forced to create more lies to cover their old lies. 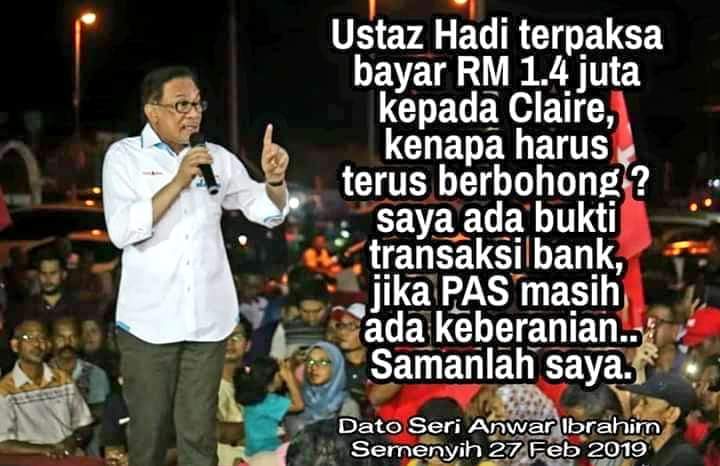 At first, PAS denied that it signed any letter agreeing not to support UMNO in the Semenyih by-election. Then they said the level of support to be given to UMNO will be different from the one it had accorded to the party in the recent Cameron Highlands parliamentary by-election. It was absolutely hilarious how they split their support, as if they were tangible and countable, between UMNO and Mahathir.

Hadi’s grand plan was for PAS, like a prostitute, to sleep with UMNO and Mahathir. While Takiyuddin and some leaders continue supporting UMNO, Hadi and certain top leaders would hide themselves to give an impression they don’t support UMNO. But Mahathir, despite his advanced age, got tired with the boring game and said he doesn’t need PAS’ support to remain as premier.

Yet, the Islamist party came running like a lapdog, insisting they will still support him, come rain or shine. Has PAS no shame at all? The old man had told Hadi and his minions to go fly kite and screw themselves. Instead of walking away with what seems to be very little dignity left, PAS leaders stubbornly and annoyingly rolled over and begged to be given the chance to support Mahathir.

Hadi Awang’s plan to split the Pakatan Harapan coalition government by spreading fake news that component party PKR and DAP were planning to move a no-confidence motion against PM Mahathir fails spectacularly. In fact, their half-baked evil plan has backfired. Had they forgotten who’s the master strategist specialising in “divide and conquer” game?

After Mahathir rejected PAS’ insincere support, the PM-in-waiting and PKR President Anwar Ibrahim has unleashed a ballistic missile on the Islamist party. Mr. Anwar said he has in his possession the bank statements to prove that PAS paid RM1.4 million to Sarawak Report editor Clare Rewcastle-Brown to end their legal suit. 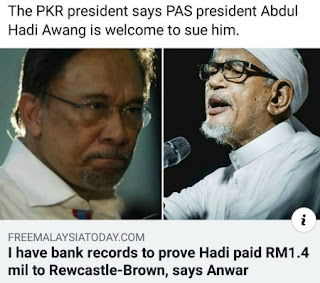 It was a naughty and clever plan to trap the serial liar PAS into committing more lies. Hadi’s lieutenant, PAS secretary-general Takiyuddin Hassan yesterday insisted that no payment was made to Rewcastle-Brown to settle the case out of court. But now Anwar has announced that  PAS had transferred RM1.422 million to the British journalist on Feb 19.

Yes, badass Anwar had deliberately tricked the Islamist party by questioning whether they had paid Sarawak Report to agree to an out-of-court settlement. And the silly Takiyuddin swallowed the hook, line and sinker. Perhaps PAS leaders really believe their lies are “Shariah-compliant” and permissible hence the God will protect them.

Trapped without the support of Mahathir and having offended Anwar for accusing him of plotting to overthrow the premier, Hadi Awang has no choice but to sue Anwar in order to clear his name. The alternative is to pretend nothing had happened and hope the scandal will be forgotten. Either way, the fake holy man is screwed.

Amusingly, pro-PAS cybertroopers, propagandists and bloggers have challenged Anwar to show those bank statements. But why should the PM-in-waiting deny the people the fun of watching Hadi, Takiyuddin and other fake Islam defenders squirming? In front of hundreds of audience, Mr. Anwar has openly accused PAS of paying RM1.4 million to settle the lawsuit.

Hadi’s refusal to sue Anwar will prove – again – that not only PAS had taken dirty money to the tune of RM90 million from UMNO, but also that the Islamist party had paid RM1.4 million to stop the trial in London from exposing more dirty laundry. Hadi’s cowardice – twice – in his lawsuit against Sarawak Report and now Anwar Ibrahim will make PAS a pariah party.

Blind supporters of Abdul Hadi Awang have also claimed that either Anwar has no such documents or those bank statements were illegally procured in violation of banking secrecy laws. Well, if that was the case, should not Hadi Awang proceed to bring Anwar Ibrahim to the court and expose, once and for all, that the PM-in-waiting is a conman? So, what is PAS waiting for? - FT