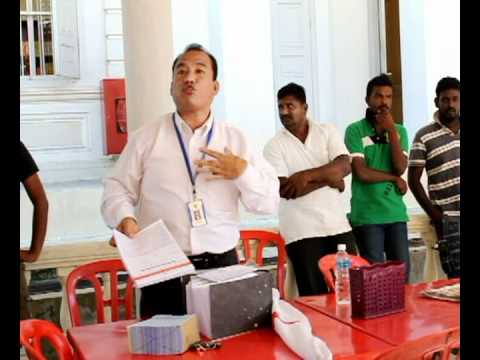 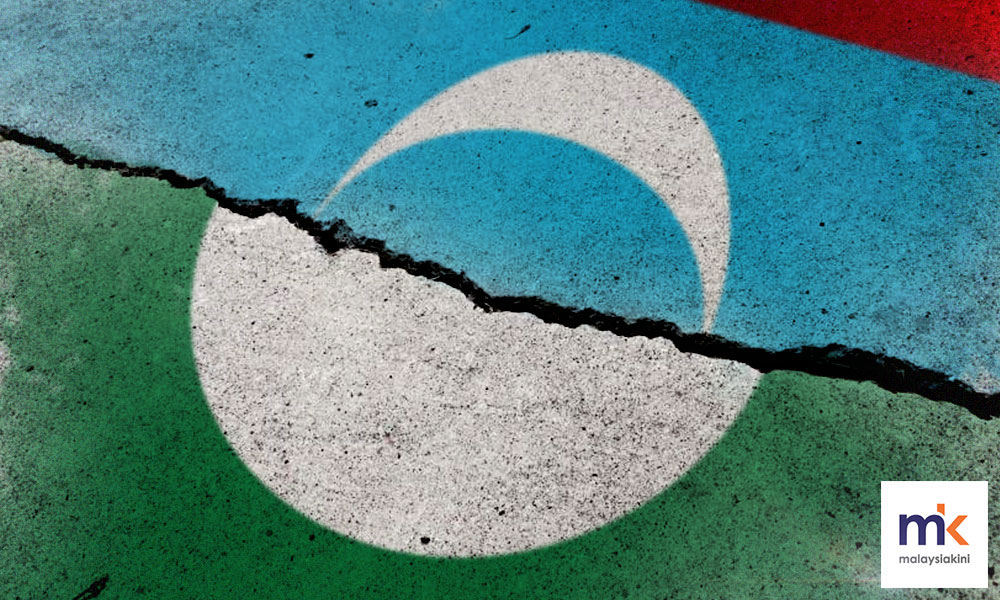 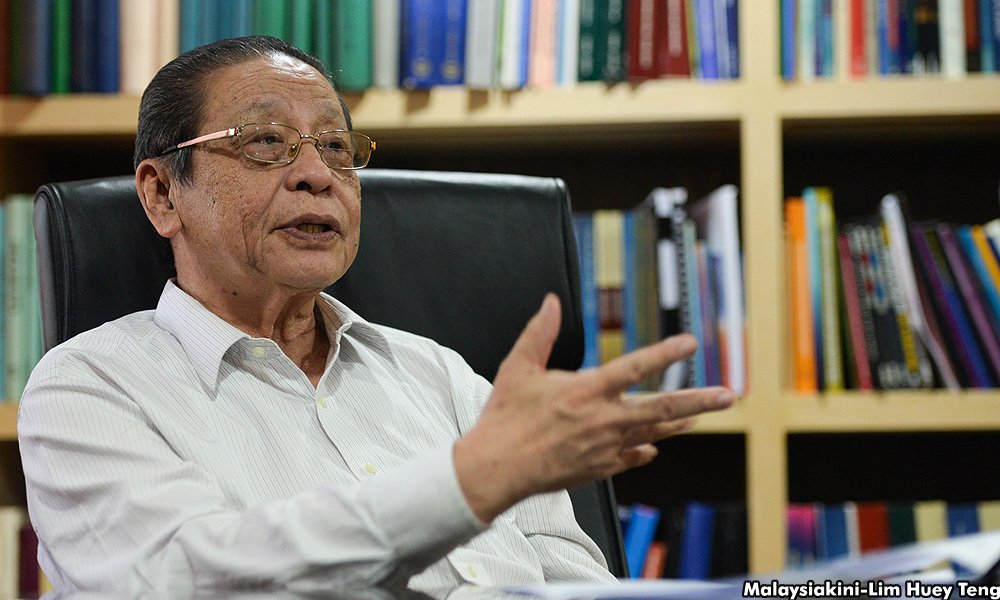 Statistically, BN will stand to gain more if PAS is not within Pakatan Harapan. It goes without saying that three-cornered fights will split the Malay votes; especially in Malay majority areas where the Malays constitute more than 70 percent of the electorate.

For now, we are just looking at the 165 parliamentary seats in Peninsular Malaysia, as the remaining 57 parliamentary seats in Sabah and Sarawak have their own peculiarities. To be sure, there are 71 Malay seats where the Malays constitute more than 70 percent of the electorate. At least, this is the conventional wisdom.

But conventional wisdom can be wrong too. This is why Harapan should not necessarily be afraid of three-cornered fights. The key is to stay united and be prepared. More bluntly, it is better to be over prepared.  And three-cornered fights will instil an ethic of discipline in Harapan. Indeed, Parti Peribumi Bersatu Malaysia (Bersatu) affirms that there are at least 94 parliamentary seats where the Malays constitute less than 70 percent of the voters.

Out of the 94 parliamentary seats, at least 60 consists of more than 40 percent of the non-Malay voters. For the lack of better word, these are the citadels of the opposition. Non-Malay voters are inclined to root for the opposition, as they have understood the highly flawed and feudal nature of Umno and BN. Invariably, the 71 Malay seats in the potential control of PAS and Umno versus the 60 mixed seats in the hands of Pakatan is, of course, a structural and distinct advantage to the latter. But there is a strategic benefit to being the underdog too. Psychologically, the members and volunteers of Harapan are stronger, better and firmer in their resolve.

In the same vein, it is also opportune for Harapan to reach out to PAS grassroots now with the message: voting PAS means voting for Umno. By voting PAS, one is, in fact, rooting for Umno's malfeasance and abuse of power, to perpetuate indefinitely.

Naturally, there are serious policy implications too, as PAS and Umno are devoid of ideas. Thus, voting PAS implies voting for the punitive GST, and the ever higher and newer taxes across the board. More hardship for the average Ahmad on the main street...

Not surprisingly, voting PAS means supporting Prime Minister Najib Abdul Razak for another five years. It is another five long years of misery that can lead to the total destruction of Malaysia's various democratic institutions that has already been bombed into stone ages now.

Why should Umno's mismanagement, where the elites fete on themselves only, be allowed to ride roughshod over the entire country of 30 million people? One should remember that there are no more than 47 members of Umno supreme council with another 10 others who attend under “turut hadir” category (on an invitation basis).

There are 17 members in PAS' religious council, the majlis syura ulama. While all may take their orders from president Abdul Hadi Awang blindly, many don't.  By mid-2016, for example, tens of thousands of PAS members have left the party due to its collaboration with Umno - this is a figure admitted by Hadi himself in the party's annual muktamar.

Amanah, which was formed by the progressive moderate group from PAS, can empower Pakatan Harapan and Pakatan, just as the latter can reinforce the ranks of Amanah too. Indeed, there is no mystery to where the tens of thousands of PAS members went.

They joined Amanah and some in Bersatu. And, there are many in Bersatu and Amanah that are against the malfeasance and abuse of power in Umno. All said, PAS is only as strong as what Harapan fears.

Light must prevail over darkness

Indeed, the fact is that PAS itself is in crisis, which is why Hadi had felt compelled to form a Gagasan Sejahtera with an unknown entity known as Ikatan, talking about "politik matang" or mature politics which some say more "politik malang" or politics of the hapless.

There is no need for Harapan to fear three-cornered fights. To form a government, Pakatan needs to walk through all forms of challenges anyway. PAS and Umno represent the clearest form of malfeasance and abuse of power.

Light must prevail over darkness. The coming together of Harapan is now the little spark that flooded light and ended darkness. Of course, PAS will start its religious edict by saying that you will go to hell if you vote other than PAS, and by extension Umno.

But remember by voting PAS (and Umno), you are actually voting hell in this world. It is therefore important to be mindful of these merchant traders of Islam who will sell and mortgage Islam for a position, power and unfortunately, money.

The voters, especially the Muslim voters must start asking the difficult questions like why on earth suddenly PAS seems to be cooperating with Umno after years of acrimonious co-existence. What are the justifications to validate such cooperation?

Do not be fooled with Arabic sounding terminologies to justify this PAS-Umno relationship, as Arabic is just another language, nothing sacrosanct about it, except for Allah SWT choosing it as the language of the Quran.

Ask why PAS is taking the position of cooperating with Umno, albeit secretively or explicitly? The Malay Muslims must also ask the questions themselves why for decades PAS has been "so green," is now coming to be "so red." Making a U-turn after a wrong turn is usually normal and understandable. But after reaching Kangar and to make a U-turn to go to Johor Baru, is a huge monumental U-turn. Ask why? 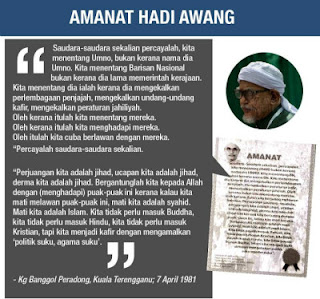 For decades PAS leaders have had it easy by quoting the Quran and Hadith (sayings, actions, approval of the Prophet Muhammad SAAS). Sometimes they dig deep into ijma (consensus of the opinions), qiyas (juristic analogy) and other sources of syariah. Often quoting out of context and to justify and defend the indefensible. Remember Amanat Hadi! It is time for the Muslims to ask them the hard questions and seek clarifications.

It is time for those who are knowledgeable in Islam like the muftis, syariah law practitioners including judges, lawyers, and even academicians, to start asking the questions.

They are all duty-bound to provide clarity and guide, to the people so as to ensure PAS or Umno Muslim politicians or even PAS or Umno ulama do not mislead the people. It is just about time for people to seek the truth, the real truth from the people of knowledge.

As Allah SWT has said in the Holy Quran:

"And it does not beseem the believers that they should go forth all together; why should not then a company from every party from among them go forth that they may apply themselves to obtain understanding in religion, and that they may warn their people when they come back to them that they may be cautious?" (Surah Al Anfal 9:122)

"It was narrated that Anas bin Mâlik stated: The Messenger of Allah said 'Seeking knowledge is a duty upon every Muslim.'" (Sunan Ibn e Majah, Book of Sunnah, Hadith No 224, classified as sahih (true) by Allama Albani)

In addition, it was narrated that Abu Hurairah stated: "The Messenger of Allah said 'Whoever follows a path in pursuit of knowledge, Allah will make easy for him a path to paradise'. No people gather in one of the houses of Allah, reciting the Book of Allah and teaching it to one another, but the angels will surround them, tranquility will descend upon them, mercy will envelop them and Allah will mention them to those who are with Him. And whoever is hindered because of his bad deeds, his lineage will be of no avail to him." (Sunan Ibn e Majah, Book of Sunnah, Hadith no 225, classified as sahih by Allama Albani)

I rest my case. - Rais Hussin,mk 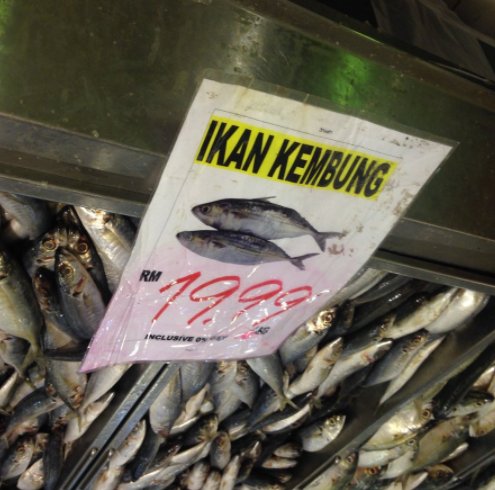 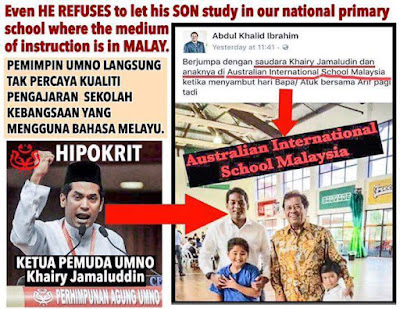 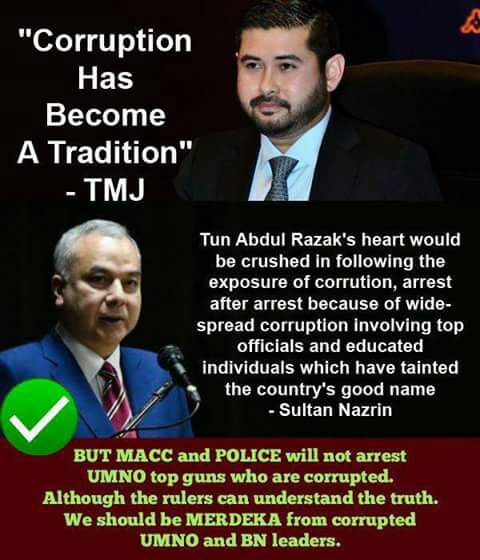 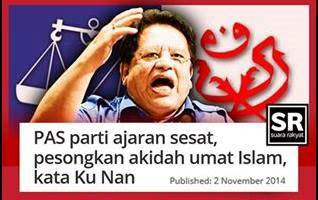