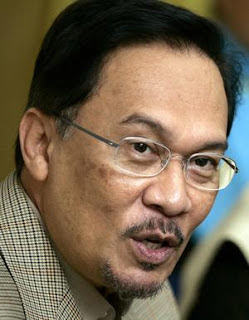 A letter written by Kenneth to Malaysiakini looks interesting enough to peek at..........

The sodomy allegation against Anwar Ibrahim could not have come at a worse time for Barisan Nasional.

It is not a godsend which will keep Anwar from Putrajaya, rather, if it is not handled with the utmost care, it could sweep the ruling party out of Putrajaya.

If it is a political conspiracy, one cannot help but be amazed that there are politicians brainless enough and audacious enough to imagine it could be pulled off.

Firstly, thanks to a badly botched up job to frame him of the same crime in 1998, there is a tidal wave of public suspicion that history is being repeated from a 10-year-old script.

The fact that Anwar is on the cusp of attaining political power only adds to the general belief that the some people fearful of losing power want him out of the way.

This chasm of incredibility and disbelief can easily be exploited by the astute Anwar to genarate a wave of public sympathy which could propel him to the seat of power.

It will not be an easy task to prosecute Anwar successfully in a trial which the public will perceive to be fair.

To be sure, this task is made even more difficult due to the disgraceful conduct of the show trial of 1998 where he was convicted on the word of a dubious witness with no collaborating evidence and the forced confession of two of his associates as a ghastly sideshow.

One wonders what the whole machinery of the police and the attorney-general are up to it. Will the AG get the date right this time? Will we see more substantial evidence than a stained mattress?

Leaving the unfortunate events of 10 years ago aside, how does one prove sodomy assuming there is no witness to the act? As consensual sodomy is also crime, the allegation must be of forced sodomy or the accuser is just as guilty.

A medical report to attest that the victim has been physically sodomised is not enough. As Anwar has commented sardonically, that’s for his accuser, Saiful to explain.

Anwar has said he does not deny making use of the apartment in question which belongs to his friend. Confirming physical evidence of his presence is therefore superfluous.

Submitting evidence that Saiful has been there will be laughed out of court. But, of course, they can prove that!

What needs to be proven is that he was in the apartment with Saiful on the stated date and time. This will require creditable witnesses. But if Anwar has an alibi as he claims, the case falls apart.

Even if this can be surmounted, there remains the need for physical proof that the act has taken place.

Finding semen stains on the mattress which can be traced to him only show that some sexual activity has taken place at some time there but does not prove that the allegation happened. It’s just circumstantial evidence which will not be enough to convince the public beyond reasonable doubt.

Even worse, the notion that a 61-year-old man with a problematic back can force himself on a 23- year old man in the prime of his youth is worth a good laugh.

The only way to prove the case beyond reasonable doubt is to find the correct semen sample in Saiful’s violated body part or a Chua Soi Lek-type video. But I don’t think they exist.

Through it all, the prosecutors will have to fight public suspicion of planted evidence and coerced witnesses. The authorities will be walking on a tightrope.

A conviction seen as unfair will generate a wave of Malay sympathy for Anwar which will find vengeance at the next polls. And I do not think non-Malays will be there to save BN this time around.

An acquittal will vindicate Anwar and portray him as a wronged victim who was dragged through the mud fighting for his political survival. Not exactly what the ruling party wants.

Anwar is going on a road show to explain his cause. What an incredible opportunity to attack the government and rouse huge waves of sympathy over this issue. Anwar has deftly turned adversity into opportunity.

Do not underestimate the charisma of the man. He can draw crowds like no Umno politician can. Those in power should be quaking in their shoes.

In 1998 Anwar last drew a crowd of 50,000 before he was arrested. Another week of freedom and Mahathir would be in danger of being toppled.

If he is arrested and incarcerated, his supporters will take to the streets fearing for his safety, mindful of the previous assault on him in custody.

It is just too difficult and risky to pursue this case. The police may as well just throw in the towel, declare no case and go home.

Meanwhile,UMNO Putera Chairman, Abdul Azeez Abdul Rahim, wants all parties involved from PKR, PAS and even UMNO convene with the Perlis Mufti Asri Zainul Abidin, and to witness Anwar and Saiful Bukhari Azlan swearing on the Al-Quran of their innocence.

The suggestion seems innocent but coming from UMNO itself spawns motives. UMNO leaders talks Islam only when they are in dire straits but will go all out to clean up the national coffer at every given opportunity. Power abuse,mismanagement,
corruption,scandals are part of their culture. They look innocent from the outside but...............

aah..near impossible because Anwar himself plan this..and put all the blame to Najib, this is a direct attack from him to Najib or BN..